If This Is It, Please Let Me Know

UPDATE: No baby yet. Have been to hospital and they say that I am in ‘early’ labor and that it could go on for days and oh, hai, yeah, sometimes it hurts like a bitch but it’s just that way sometimes. Will update on that hospital visit – which made me, much to my embarassment, cry – later, after I have drunk my castor-oil martinis.

You all are getting sick to the death of the subject of my pregnancy, I know, and I apologize. Believe me, if I could summon the will to discourse intelligently upon any other topic, I would do so. Because, yes – as I keep saying over and over again – I am well and truly sick to the death of it myself.

I’ve been having crazy false labor for about the past 16 hours now. It’s not regular labor, because, well, it’s irregular, but it’s more painful than past episodes, and this morning it’s involving actual back pain and shit and although I know that this can go on for weeks, it feels different enough that I think something might be up. Which means, of course – because I have gone and written those words down and therefore invited the gods to bitch-slap me hard – that it’s all probably all going to amount to nothing. But still: I get to sit here and feel my insides cramp up and wonder, for the umpteenth time, is this it? while contemplating the pros and cons of either continuing suffer through an interminable labor (because, false or not, this feels like labor, and so it is, to my mind, labor, and someday this kid is going to hear all about how mommy was in labor with you for weeks and don’t you forget it) OR finally getting to a point where this kid might decide to get his massive self out of there.

For the record: the ‘pros’ of this continuing to be false labor involve the fact that so long as the labor is false, I do not have to get up off my lazy ass and do anything about it, like, say, pushing a giant kid out of my nether regions. The pros of this being true labor, obviously, involve the fact that I CAN HAS GIANT FETUS OUT OF MAH UTURUS kthxbye?

This is me, this morning, at 37 and a half weeks pregnant: 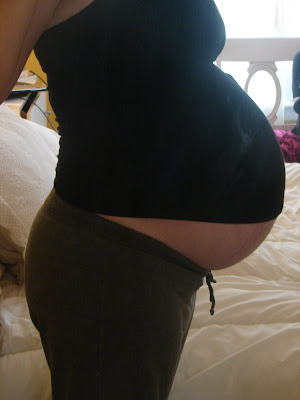 I am massive. My back hurts. My belly hurts. And it just keeps contracting and uncontracting and messing with my head omfg and I wish that I knew whether this time, it really is time.

Now if you’ll excuse me, I need to go double over in pain and pray for respite.

*******
Everybody who participated in the shower this weekend? Thank you all beyond much, really. I’m trying to get around to all the posts to thank you personally – I’ve made it to about half of them so far, I think – but I’m being slowed by this may-or-may-not-be-labor thing. I promise that I’ll get there eventually. In the meantime, big love to you all. (And also to everybody who talked me down from my panic about C-section nazis terrorizing me with their calls of doom and gory videos. Thanks for hearing me out, and for, as always, saying just the right soothing things in low tones and telling me to just go ahead, get it out, be angry. I love you for that.)
Share
0
Share
0
Share
0
Share
0
Previous post
Oh, Hai, Person With The Childbirth Horror Videos? DO NOT SHOW ME THEM
Next post
Hysterical