The first contraction hit at 7:46 pm. I know this, because I checked the time. I was pretty sure that it was just more false labor, but still. One always hopes. So I checked the time, and then went back to eating my fajita.

Ten minutes later another contraction hit. Ow, I said to no one in particular. That hurt.

Was that one different? HBF asked. Is it time?

Eight minutes later I was doubled over. Emilia pulled out her doctor’s kit and held the stethoscope to my belly. Baby brother wants to come out now?

HBF: Should we go in?

I don’t know. It might be another false alarm.

HBF: I think we should go in.

Fifteen minutes later we were in the car, no thanks to me. I dawdled, even as the contractions sped up, reluctant to go in to the hospital and face another round of eye-rolling if these were, as I thought, just another bout of bad false contractions. HBF prodded and pushed until I relented and buckled into the passenger seat. We drove away at 8:26pm, just as another bad contraction hit.

We were barely fifteen minutes from home – and still probably some thirty minutes from our downtown hospital – when it became apparent that whatever was happening was happening quickly. Very quickly. Since we’d left home, the contractions had gone from eight minutes or so apart to barely a minute apart to not apart at all. HBF called 911; 911 patched him through to an ambulance; the ambulance advised that we pull off the highway and wait for them.

HBF: Pull off and wait?

HBF: I really don’t think we have time to stop and wait.

Ambulance Dispatch: We can’t chase you down, sir.

Mad vehicular dashes to hospitals with women in labor are usually played for laughs on film and television. Let me tell you: there is nothing funny about racing toward a hospital that seems to recede ever further into the horizon as you speed forward in excruciating pain, your body completely out of your control, medical disaster ever more imminent with every passing second. Even when the toddler in the back seat starts shouting MOMMY YOU NEED MEDICINE YOU NEED MY TOADSTOOL? it’s not funny. It’s stone-cold terrifying.

And when your body just starts bearing down and pushing and you cannot stop it and then you’re still like ten minutes away from the hospital and the baby starts shoving its way out of your parts and OMG YOU CAN FEEL IT COMING OUT? Then? Your mind kind of snaps.

(So does the mind of your husband, who at this point is simultaneously driving a speeding vehicle with one hand on the horn and the other trying to feel for baby’s head between your legs while shouting into his phone-headpiece to someone at the ER that the baby’s coming the baby’s coming you need to be ready when we get there!)*

We arrived at the hospital at about 9:05pm. At the wrong entrance. Which was locked. Sufficient banging and the luck of some random guy wandering through the lobby got us in, and much shouting from HBF brought the medical team that had been waiting for us running. I was already mid-delivery: the bag of waters was being involuntarily pushed out – intact – and the baby was crowning. Eleven minutes later, at 9:16pm – after much horror-movie-worthy screaming – Jasper was out.

90 minutes from start to finish of active labor. Eleven minutes after stepping out of the vehicle. Fourth degree tearing (borderline) requiring on-the-spot surgery which, you know, without epidural or spinal anaesthesia or anything more significant than local anaesthetic and an extra-strength Tylenol? Almost as hair-raising as the near in-vehicle delivery. Almost.

It was terrifying. The most terrifying experience of my life, bar nothing.

And the best birthday present ever. 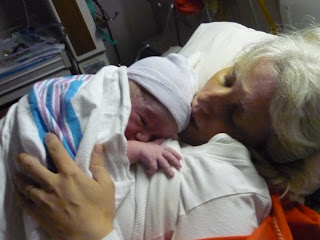 HBF broke, like, a zillion traffic laws, but he was a hero, he really was, getting us to the hospital in the nick of time. We found out immediately after the birth that we couldn’t have delivered Jasper safely without help – the cord was wrapped around his neck. There was, quite literally, not a second to spare. My mind snaps a little bit more every time I think about this. Which is why I’m going to try to not think about it anymore.

I bitch about the gods a lot, but someone or something was looking out for us. And for that – for everything – I am deeply, deeply grateful.

Now, am going to rest. Really.

Because you asked: he weighed 9 lbs 2 oz – just a hair under what the ultrasound indicated. Around 20 inches long with a VERY big head (and chubby cheeks with one dimple).

And Emilia was right there until the gory parts, at which point she was enlisted by nurses to help supervise the nursing desk until it was slightly less terrifying for her to enter the room. When she did rejoin us, she was all smiles – huge smiles – and bursting with pride for having helped bring her baby brother into the world.