You Got A Problem With My Boobies, PUNK?

Yesterday, I took my brood to the library. It’s a lovely library, with soaring ceilings and vast windows and big, plush leather chairs and – of course – miles and miles of books. We settled into a corner of the children’s section on a comfy sofa, Emilia with a stack of picture books and me with Jasper, on the boob.

It was raining outside; we were damp from our walk. Droplets of rainwater fell from my hair onto Jasper’s cheek and he pulled away, gurgling his disapproval. My breast dropped from his mouth and sagged, exposed, below the edge of my yanked-up t-shirt while he squawked.

“He’s mad at you, Mommy,” Emilia remarked without looking up from her book. “Because your boobies are wet.”

I laughed, and almost didn’t hear the polite coughing from the nearby stacks. A woman stood there, books in hand. She didn’t meet my gaze, but looked over toward a table of computers where three young boys – probably eight or nine years old – sat playing a game. She coughed again and raised her eyebrows in their direction. Her meaning was clear.

I tucked my wayward breast back into my shirt and pulled Jasper upright. My immediate impulse was to be embarassed, contrite. To gather up my children and my things and go find somewhere else to nurse, somewhere where I wouldn’t risk exposing young boys to the indecent display of my breast. To feel badly for making such a naked display of my motherhood in front of children.

My secondary impulse was to let my boob drop out from beneath my shirt again and use my free hand to make an indecent gesture at the woman.

I did neither. I simply looked away and pulled Jasper closer to my chest, tucking him against my breast so that his pale round head covered the pale round globe of the boob. And struggled to control my anger.

That woman had hit a nerve. Had we been at a bus stop, or a park bench, surrounded, say, by seniors, and someone had directed a disapproving look my way, I would have ignored them. But this woman had articulated her disapproval on behalf of children. Her problem, she implied with her look, was that I was exposing children to something inappropriate, something indecent. And for a moment, I bought it, and felt ashamed. Surely young boys shouldn’t see an exposed breast in public, right? Why, that would corrupt them!

Women who nurse – and, for what it’s worth, women who don’t nurse – should feel proud – and should be made to feel proud – nourishing their children anywhere, anytime, in front of anybody. Especially in front of children, who, more than anybody, need to know that a mother nursing her baby is a natural, beautiful thing. That breasts aren’t just something for adults to leer that. That the human body is built for amazing things, and that the life-sustaining miracles that it performs are nothing to be ashamed of. Of course we teach them that some beautiful and satisfying things are private – but a mother caring for her baby is not one of those things. It is for everywhere, and should be celebrated.

It’s World Breastfeeding Week this week. It should be a week for celebrating our freedom of choice in how we nurture and nourish our children. Instead, all the stories about nursing that I’ve seen have provided more evidence that we don’t really have that freedom. A woman who was nursing in an H&M store in Vancouver was sent to a change room to nurse her infant. A woman on a WestJet flight was asked to cover up with a blanket. A woman nursing her baby in a library in Bowmanville, Ontario, got the stink-eye from some random stranger. We were – we are – all of us, at some point, made to feel ashamed for mothering.

Sure, we protest. But I’m getting really fucking sick of needing to protest. I’m tired of it. And this is why it sucks (no pun intended) (okay, sort of intended) so much: when women are made to feel ashamed for breastfeeding, they’re being shamed at the most vulnerable times in their lives. They are exhausted. They are stressed. They are, often, struggling with depression. And still they fight on, working so, so hard to care for their babies. They are champions. And yet it is during this time, the most trying time of their championship, while they struggle to keep their footing and to keep going, that others kick them down and shame them.

And that just makes me so angry that I can’t even see straight.

I’m not going to protest. I have no spare strength for protest. But I will do this: I will continue to bare my breast for my baby at every opportunity. Any time, any place. And if anyone so much as looks at me askance, I will look right back, and I will say – if only with my eyes, although I so wish for the courage to speak these words aloud – YOU should be ashamed of yourself for trying to shame me. You should be ashamed for belittling a mother. Shame on YOU.

And I will hope that my daughter is there to hear it. 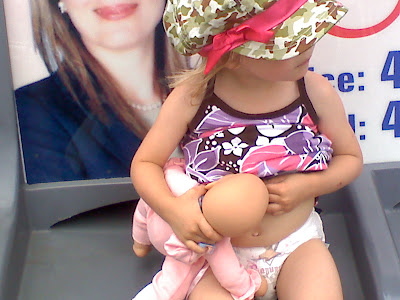 Okay, for serious now, I am taking a small break, just a few days. There’ll be some guests here while I spend a few days restoring myself. They’ll take care of you. I’ll be around reading comments and such, but mostly I’m going read and rest and flash boob. Wish you were here, don’t you?

I’ve Looked At Boobs From Both Sides Now