Look At Me Not Sleeping

I haven’t slept in four nights.

But when you’ve passed that ‘fourth trimester’ grace period – wherein, it seems, Nature gives you a pass on needing sleep and proper nutrition and enables you to function like a superhero, leaping over the newborn weeks in a single bound, fueled by the nitro-force of a wicked hormone buzz – when you hit the wall, somewhere around week 13, the lack of sleep catches up with you and no amount of cinnamon rolls and double-shot espressos will set you to right. So you set about pursing sleep with a vengeance (so appropriate, that idiom – you chase sleep hoping to tackle it and wrestle it and punish it for so cruelly withholding its gifts) and when you finally get some (oh yeah) through some combination of spousal support and anti-anxiety medication you cling to it desperately, desperately, determined to never let it slip your grasp again.

And then when it does slip your grasp, you go to pieces.

Four nights it’s been; four nights of wrestling a vibrating baby who is development-spurting at the speed of light and spending his nights rolling and crawling oh god help me around his crib – or, when the victory squawking has become too much, in our bed – in pursuit of some invisible gold ring that I assume hovers magically just beyond his reach. Four nights of spending hours trying to get him to just be still, to just chill out, to save the gymnastics and the glee-clubbing until the morning, please oh god please, only to have him settle into something approximating a sleepy calm at the precise moment that the preschooler wakes up coughing and hollering about her nose hurting.

I’m so tired that I can’t see straight. And I just can’t see any solution. Crying it out doesn’t work because he seems to have an infinite capacity for wakefulness and so can outcry, outsquawk, outholler, outlast us with little effort. Bringing him into bed with us doesn’t work because although he’s more likely to take a few sleep breaks from his gymnastics practice when he can crawl up tight against my breast, he never actually stills, and so even though he snoozes while he’s cuddled up against me he also kicks me in the ribs and/or punches me in the head every few minutes and that’s, you know, not conducive to sleep.

The husband does all of the actual getting up, the hovering over the crib, the delivery of child to my side when it seems there’s nothing left to do, but still: I can hear it all, I can feel it all, and not even the Ativan helps when your body is shouting at you to tend to your baby. So what’s next? Do I just check into a hotel for a night or two – seriously, we talked about that last night – to catch up on sleep? Or do I just ride it out? How long can I go without sleep? How crazy will I get? 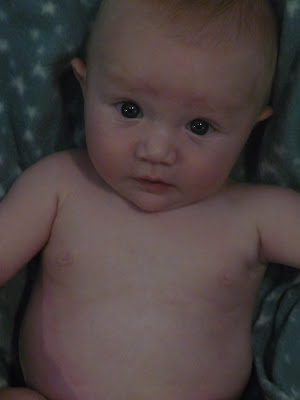 Mama said knock her out.

(And, and… how long can I go on just barely coping? I have an out-of-control inbox – I am seriously weeks behind in responding to e-mails – and an ever-lengthening to-do list and – worst – a backlog of things that I need/want to write about – my frustrations searching for my long-lost brother, my ongoing struggle to figure out how not to be dominated completely by my nearly three-year old daughter, some thoughts on raising children under the condition of post-modern capitalism, an anecdote or two about politesse as it pertains to penises, etc, etc. My brain is backlogged and cramped and sore and all this sleeplessness is making it worse. Is it possible for one’s brain to simply explode?)

Seriously. If my husband were to bring up the issue of vasectomies right this minute? I’d give him one myself.

Update: Last night (Friday night), he slept over eight hours straight. EIGHT HOURS. No idea why. Things we did differently: kept him up a bit more in the day, so that he had two longer naps rather than multiple shorter ones, put darker curtains on his nursery window to block more light, and put him to sleep in a snuggle (modified, arms-free swaddle) blanket. Will repeat these steps today and see if it works again. Whatever it is: AM SO ABSURDLY, MANICALLY GRATEFUL.

The Sins Of The Tiger-Blooded Assassin Warlock Fathers