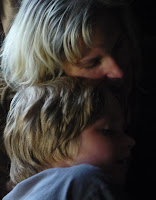 He wants to be invisible, she tells me. When we’re out he clings to me and turns his face into my side and it’s like he wants the the whole world to look in the other direction, away from him and his weakness and his wheelchair.

She sighs. Your sister told me, when they got back from DisneyWorld, that he was unhappy in the crowds, that he was embarrassed when they couldn’t get him onto the rides, that he just wanted to hang behind everyone else and hide.

He knows, now. My mother chokes on her words. He sees himself. He sees what he thinks everyone else sees. And he hates it.

When Tanner was diagnosed with the condition that will kill him, he was four years old. He was a boisterous preschooler with a big smile and a habit of barreling at you at top speed and knocking you down, the better to wrap his little arms around your neck and wet your cheeks with slobbery kisses. His gait was a little funny – he walked on his toes, like a wannabe ballet dancer, and lost his balance, a little, sometimes, going up stairs. But nothing that made him seem anything other than the adorable cyclone of a four-year old that he was.

But then it became clear that he wasn’t walking as well as other kids his age. A caregiver commented on the unusual shape of his calves. He continued walking on his toes. A physiotherapist was consulted. Then a doctor. Then the geneticists. And then, one evening, I got a phone call from my mother, telling me that they’d finally gotten the results of the tests and that Tanner had something called Duchenne’s Muscular Dystrophy. What’s that? I asked. And then my mom burst into tears, and said something incoherent about muscles and dying and I felt a chill roll down my back, I felt it run like a stream of cold water from the base of my skull and down along my spine and, with the phone tucked between my ear and my shoulder and my mother’s cries echoing across the wire, I brought my fingers to my keyboard and Googled Muscular Dystrophy, Duchennes and the chill turned to ice. He would die. His muscles would disintegrate and he would die.

No cure. No hope.

For the first year, it was easy to wrap ourselves in platitudes like live for the moment and seize the day and rejoice in the time that you have because Tanner didn’t change much, not at first. His walking got a little more awkward, but he was still a rough and tumble force of a little boy who loved nothing more than fierce hugs and cuddle-wrestling. To anyone who didn’t know him, he was just another ordinary child. No clock ticking over his head, no enemy within. Just a boy. But then he started undergoing steroid treatments, which affected his behaviour, and his physical condition deteriorated and continued deteroriating and word started getting out among neighbours and school-peers that he was sick. Disabled, obviously, but not only that: disabled, and marked for death. Some children started teasing him, and he began to understand. 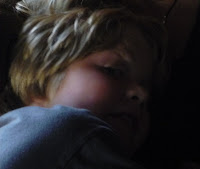 That was over two years ago. That was over two years ago, and Tanner has since learned – we have all learned – to cope with the reality of his illness. That is, we think that we have, until we see Tanner recoil in embarassment from his wheelchair, or refuse to make eye contact with other children. Or tuck his head against his mother’s thigh at DisneyWorld and insist that, no, he doesn’t want to see if they can accommodate him on that ride, or this one.

This, this is a terrible heartbreak. We imagine, we believe, that all sick or disabled (no, he is not differently-abled. He is 8 years old and he can neither run nor play sport with other children. He experiences his condition as a disability, something that prevents him from doing that which he most wants to do) children bear their conditions nobly, and with good spirits. We watch the TV shows and the movies and our hearts are lifted by these brave little souls who carry their fates with dignity. We forget, however, that these are mostly fictions, that however noble are our beloved broken children, they are still children and they hurt like children and they fear like children and they cry like children and is there anything worse, really, for a child, than to be constrained in a chair – embarassed, ashamed – at the happiest place on earth while all the other children race and play with abandon?

Tanner wanted to hide. He wanted to not be seen. He wanted his weakness, his powerlessness, his sickness, his bound-in-a-chairness to be wrapped in a cloak of invisibility. He wanted – in the middle of all of the joy and all of the celebration and all of the hope (and yes, Disney does these things so well, with its spontaneous choruses of dreams really do come true, with its sudden eruptions of dance and sparkles, with its ever-present proclamations of joy, you can almost taste the hope, the magic) – to disappear.

And I don’t even have words to describe the hundred million ways that my heart breaks – that it shatters – to know this. I don’t have the words to describe the force of my wish that this just weren’t true, that this would all just go away, that I could make the disease that is killing him not only invisible, but non-existent. That I could take away everything that makes Tanner want to hide and to bring him out into the sun and say, with conviction, see? there is no darkness here. There is nothing to be afraid of, there is no reason to hide.

There’s a small part of me that wishes, sometimes, darkly, that we could have four-year old Tanner back; that we could go back to those days before the diagnosis when he was a wee bundle of four-year old fury, squeezing us with his round little arms, pummelling us with his joy, living a life of unrestrained happiness, reaching toward a limitless sky. But to have that Tanner back would be turn our backs on the Tanner who lives and loves and pummels us – with the sheer force of his heart – now. And that Tanner – this Tanner – is extraordinary, amazing, beautiful, brave. So, so brave, so, so beautiful. So deserving of being seen. Seen, and included, and loved.

It is not, however, my place to thrust him into the spotlight, to force him to bravely face the crowds and share himself. I can only tell his story, and hope that it gives you – the known and unknown yous who follow his story – some sense of the miracle that he is, this brave little boy who carries this terrible, terrible burden and who nevertheless goes forward, shyly, into the world, hoping to share in its joy. And if it reminds you to make an effort to really see somebody, anybody, who is hiding in a literal or figurative corner, to go over and take their hand and make the effort to let them know that you see them and that you think they are wonderful… well, then, that will have been no small thing.

Do it for Tanner. 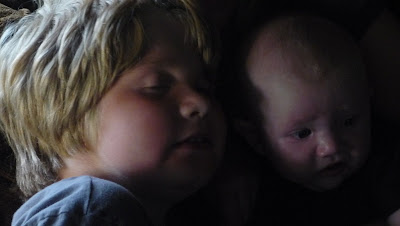 Motorola – who sent me on my trip to Disneyworld (which unfortunately couldn’t take place at the same time as Tanner’s trip; one of his biggest wishes has been to someday have a holiday with his cousins, but this is tremendously difficult to arrange, and we were disappointed to miss the opportunity) – has offered me a Motorola Motozine Zn5 camera phone (read about it here; it is awesome) to give away. Which I’m going to do, through a random draw, BUT: in order to be eligible to win, you need to state, in your comment, what you will do to pay your good fortune forward. It can be anything – shovelling the walk of the old lady who lives across the street, or sitting down and having a talk with your kids about being inclusive of kids – like Tanner – who seem different, or making a donation to a charity of your choice (it’ll be honor-system principle whether you follow up or not, but I really hope that you do.) You have until Sunday, midnight.

On my end – because I’m on a one-woman mission to turn every giveaway that hits the internets into a pay-it-forward giveaway – I’m going to make another donation, in the name of the winner, to the organization (Parent Project Muscular Dystrophy) that my sister ran to raise funds for. (If you haven’t already made a donation, please think about doing so. I know that you have other causes to support, and I’ll understand if you can’t, but please, think about it, and maybe pass the request along.) And then I’m going to send a camera to Tanner, so that even if he feels most comfortable on the sidelines, he can share with us what he sees. So that we might, perhaps, see the world from his side, and look there more often.