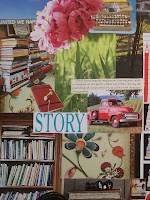 Here’s the thing about maintaining a personal blog: one sometimes forgets that one is not simply maintaining a diary – albeit a carefully thought-out diary, one that is edited for style and for grammar – but publishing, virtually, a sort of memoir or collection of essays or some combination of these. One forgets, sometimes, that one has made, is making, one’s story public.

I forget this all the time.

The primary danger, here, is not that one might unintentionally reveal something that one might later regret. We most of us hesitate with our cursors hovering over the Publish Post button every time that we write, mentally reviewing what we’ve said and how we’ve said it and worrying over how it might be received. The Publish Post button reminds us, in the crucial moment, that we are in fact publishing, making public, our stories, our rants, our confessions. What the Publish Post button does not remind us, however, is that with every post that we publish we are constructing and furthering a narrative that is followed by tens or dozens of readers, tens or dozens of readers who might well want to know what became of that problem, was that issue resolved, what happens next? They follow a narrative, and our blogging platforms don’t provide tools for reminding us that we’re weaving such narratives as we write. And because we are not reminded, we – I – sometimes forget.

I was reminded – uncomfortably – of this the other day when I wrote a confused, rambling post that was a variation on another post that I’d written a few months ago. I knew that I had already written on the topic – whether or not I wanted to keep open the possibility of having a third child – and was just trying to sort my feelings out further. It was a post that I wrote for myself, not one that was intended to advance my story, such as that story is. And that pissed at least one reader off, a little: she protested that I was just retreading old ground and that it was frustrating and why didn’t I make more of an effort to let readers know what I was doing to prevent what seemed to be my inevitable slide into whiny insanity – for example, what had I done about the sleep issues? Had I taken any readerly advice? – because, seriously, if I kept this up – and certainly if I made the terrible mistake of committing mental suicide by further childbearing – she, for one, was not going to be able to read me anymore. (She later apologized for articulating herself so harshly, and made clear that she was just frustrated because she is a fan of the blog, and I’m totally comfortable with that, so please don’t smack her in comments.) Which: OUCH.

The comment struck a nerve, because a) I’m sensitive about the possibility that this blog can be, you know, angst-ridden at times, and believe me, my angst bores even me, and b) oh, gawd, I like totally can’t maintain the thread on my own stories, can I? But there’re reasons why I don’t always (read: almost never) maintain a narrative thread: because sometimes doing a follow-up on how nothing has changed and how I’m still angsting out over the same old miscellaneous bullshit seems, I don’t know, tiresome, and because – more often than not – I forget. Some other issue comes up – the girl pours canola oil on the living room sofa, or I become obsessed yet again with the finality of vasectomies – and whatever thread I had begun to weave about sleeplessness or feeding baby or finding long lost siblings gets lost.

Which is fine, in a way: this is my story, and if it’s disjointed, so what? But still: I like a coherent narrative thread, and so far as coherence is possible in personal narratives, why not pursue it? I can’t promise that I’ll follow up on every little issue, but I can promise to make an effort to not just abandon cliffhangers (I laugh even as I write this. Who among you was waiting with bated breath to see if Her Bad Mother would ever sleep again, dun dun dun DUN?!?!?) So, to that end: the first of a series of semi-occasional, whenever-the-hell-I-feel-like-it, will-probably-forget-to-do-this-ever-again updates on stories that you probably don’t care about but this blog is a narrative, dammit, and so the story must go on:

1) Did Her Bad Mother ever sleep again? No, she did not, and probably will not again, ever. She has tried most of the suggestions offered and none, so far have worked. She would just give up and look into becoming a vampire, were it not for the fact that she doesn’t want to eat her baby (I don’t care what Stephenie Meyer implied in Breaking Dawn about mother-love overcoming the temptation to sink one’s teeth into buttery baby butt cheeks; if I were a vampire I would totally eat my baby because, my god, the deliciousness), so she’ll just persist in this lovely and only slightly inconvenient sleep-deprived fugue state.

2) Did Her Bad Baby ever take to solid foods? Yes! He did! He does! But only if they’re, you know, solid. As in, able to withstand the clutch of a chunky little fist. Which is to say, hunks of bread or cereal biscuits or meatballs or whole baby carrots or, for some reason, pickles. Anything mushy, anything on a spoon, anything in a bottle (sigh) is rejected with a swat of a chubby hand.

3) Did Her Bad Mother ever find her long lost brother? Has she made any progress? Not so much. Believe me, you’ll hear about it when – WHEN – anything happens.

4) Whatever happened to the Phallic Lovey? He (Christian name: Toadstool) was tossed aside by the girl – who declared herself to be ‘too big for Toady now’ – a few weeks ago. It was like a sad Toy Story 2 sub-plot, really, and Her Bad Mother got a little weepy. Her Bad Husband, however, rejoiced. And then this happened: 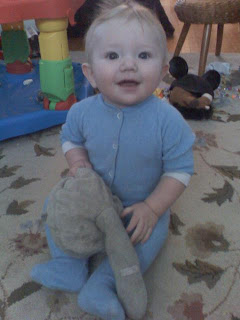 And so it goes.

Also, oh, hai: yesterday was Delurking Day, and I missed it. Feel free to make up for that today.