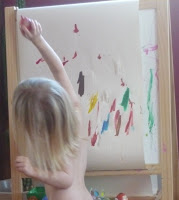 She doesn’t try to leave the house naked, although she has, in the heat of summer, had more than one naked spree in the yard. She just prefers, while indoors, to conduct her day without clothing. Which, you know, I sort of understand. Sort of. If I was a compact little person and did not fear knocking over coffee mugs with my pendulous boobs, I might enjoy doffing my clothing while going about my day. But I’m not a compact little person, and I might knock over coffee mugs with my pendulous boobs and, also, frighten any passers-by who might look in the windows. So it’s just not for me. But for Emilia? It’s simply the best condition in which to pass one’s time. 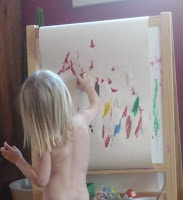 So it is that she watches television naked, plays the piano naked, paints pictures naked, reads stories naked, does yoga naked (seriously), dances naked, eats cookies naked, and discourses on the superiority of Diego to Dora and Grover to Elmo and DJ Lance to Barney naked. Which, as I said, is sort of awesome, in a Platonic perfection of the forms kind of way (anyone who has ever doubted the classical argument that there is such a thing as the perfect form of any actual or abstract thing need, I think, only consider the tiny perfect physical form of a very young human being to be convinced that there is some force to that argument.) But it’s also a little disconcerting. We are – I am – accustomed to moving through life clothed, for the most part. To all of sudden be accompanied, always (in the home, at least), by a tiny little naked being is a disruption of my usual way of doing things. It is to be thrust, suddenly, into a landscape that bears no small resemblance to an all-toddler performance of A Midsummer’s Night Dream, full of naked sprites wearing funny hats and masks and giggling maniacally.

I love that my daughter so exults in her physical being, that she is so unreservedly comfortable with her physical self. And yet I catch myself, sometimes, pestering her about sweaters and socks and underpants. Aren’t you cold? I ask. Would you like to put on socks? And, where are your underpants? Let’s put on underpants, shall we? You love your underpants!

And she rolls her eyes at me and says, no.

No, they blew off.

No, because my pachina can’t breathe.

No, because my pachina gets scared in the dark.

No, because Swiper stole them.

All of which are entirely reasonable explanations for the absence of underpants, I suppose, but still: that she finds it necessary to justify her nudity to me – and that she demonstrates no end of creativity in coming up with such justifications – makes me feel, I don’t know, a little guilty? When I pester her about putting something on – sweater, socks, underpants – I worry that I am nudging the boundaries of shaming. That she feels compelled to defend her choice to be naked, that she constructs ever more elaborate explanations for shunning underwear (my pachina gets scared in the dark!) – is that evidence that she struggles under the gaze of an over-anxious, prudish mother? Am I sending the wrong message (naked is wrong, naked is bad, naked is not how we live, good girls don’t get naked, good girls wear underpants), even though I don’t intend to send that message, even though I don’t want to send that message? 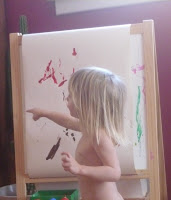 I don’t worry about her becoming a lifelong nudist. I worry about her getting cold. I also worry about her peeing on the couch, which hasn’t happened yet, but still: one particularly engrossing episode of Global Grover and all the Scotchguard in the world won’t save our off-white sofa. I don’t worry about her being too fond of nudity. I don’t know that it’s possible to be over-fond of one’s own nudity. Her pleasure in her own nakedness is, I think, lovely. I love she loves her own skin, that she is most comfortable in the raw, that she curls up like a hairless cat on the sofa and tucks her feet under her bum and snuggles against her blankie and then waves one tiny hand imperiously to demand a cookie and some milk, both of which taste undeniably better when the crumbs and dribbles can roll down one’s bare chest and get caught in one’s navel. I love that she loves her little self, that she exults in her physicality, that she takes joy in feeling the heat from the fireplace warm her naked bottom, or the scratch of the wool rug against her bare belly, or the soft curve of the sofa pillows against the skin of her back. I love that she is so unabashedly, physically she. So I resolve to not worry about shame or unshame and to just let her be.

But if she pees on my couch, those underpants are going on with duct tape.