It’s a photo of me on my wedding day: just me, alone, posed at an angle, looking slightly over my shoulder. I’m not quite smiling, but not quite not smiling, either. It’s one of the very few photos from our wedding day that I like; I usually hate how I photograph, and the photographic record from that day produced few exceptions. This photograph was one of them. I like this photograph. 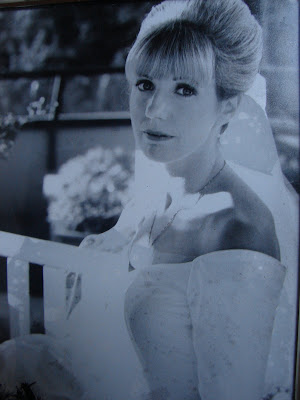 So does Emilia. “This is pretty, Mommy.”

“Is it your wedding?”

“Why do you have a different face from what you have now?”

How does one explain aging to a three year-old? That photo was taken over 13 years ago. I was in my mid-twenties. I was young, impossibly young (and yet, how old I thought I was. I was 22 when I met my husband. I thought that I was a woman of the world, well-travelled, experienced, mature. How was it that I could ever have thought that I was anything other than a child?) That photo is a photo of a much, much younger me. Of course I look different.

“I’m older now, sweetie. That was a long time ago. People change as they get older. You don’t look the same as you did when you were a baby, right?”

She frowned. “But you’ve got stuff on your eyes.” She stabbed a tiny finger at the photograph. “You’re wearing make-up.” She said it as though it were an accusation. She said it as though it were something that I’d been keeping secret from her, something that I’d concealed and denied and prevaricated upon – a secret past as a real, live make-up-wearing girl. A girl who bore little resemblance to the frumpy matron standing before her. I had, it seems, been withholding some very important information from my daughter: I hadn’t always looked like a mom.

Not all moms are frumpy. I’m not exactly frumpy myself, strictly speaking. I get good haircuts, which I don’t necessarily always, you know, brush or anything, but still. I wash. I wear lipgloss. I have really good shoes. But I don’t spend a lot of time buffing and polishing and making-up. I just don’t have the energy. And truth be told, I don’t really care. I just don’t. It’s not that I’ve given up, it’s just that in a showdown between putting on eyeliner and getting fifteen more minutes of sleep, eyeliner – or straightening irons or mascara or Crest WhiteStrips – sleep will always win. I’m simply no longer that girl, because I am, simply, no longer a girl. I’m a woman – a woman dragging out the long tail of her thirties under conditions of extreme sleep-deprivation – a woman who has had two children and no Botox – a woman who has grown comfortable in her own imperfect skin.

And yet, my daughter – my daughter, just three and a half and already exposed to the culture of GirlTM at preschool and in playgroups and on television (why we embrace Dora in this house, and limit – though not deny – exposure to the Princesses: because Dora – with her un-belashed eyes and her little pot belly – is so ordinarily, naturally girl-like) – my daughter looks at me and sees something that doesn’t accord with what she is learning about femininity. She looks at the picture of me on my wedding day, and sees someone who looks a litle bit like a Disney Princess – someone with big, thickly-lashed eyes and a puffy dress and a look of serene docility – and then she looks at me, the woman, the mother, and sees something different. And for a moment, I cringed, and was – for a fleeting moment, a fleeting moment – ashamed. And then I was ashamed for feeling ashamed.

I knelt down and took the picture in my hand. “I still wear make-up sometimes. Just not all the time. I look nice with make-up, I know. But I also like how I look without make-up.”

“But I also like your make-up. And your princess dress. And maybe you could have sparkles, too. And eyelashes, and a crown. And you could wear them every day, or maybe just Saturday. And look like a girl. I like it when you look like a girl.”

Where does one go with this? I don’t want to teach her that pretty is something to be disdained – I like me some pretty – but I do kinda want to nip in the bud the idea that ‘looking like a girl’ = looking ‘pretty’ = looking like a princess. Is there a place for princesses in our ideas of what’s pretty, without making ‘princess’ the determining factor? And how do I balance that with the realities – for me – of aging and wrinkles and mascara-fatigue? How do I encourage her to see that beauty as beauty, and to recognize it as as feminine as anything that Disney can crank out?

Or should I just give up, ScotchGuard the ol’ wedding gown and make like a middle-aged, Dyson-and-laptop wielding Cinderella? PRINCESS IS THE NEW BLACK.