If Wishes Were Pussycats 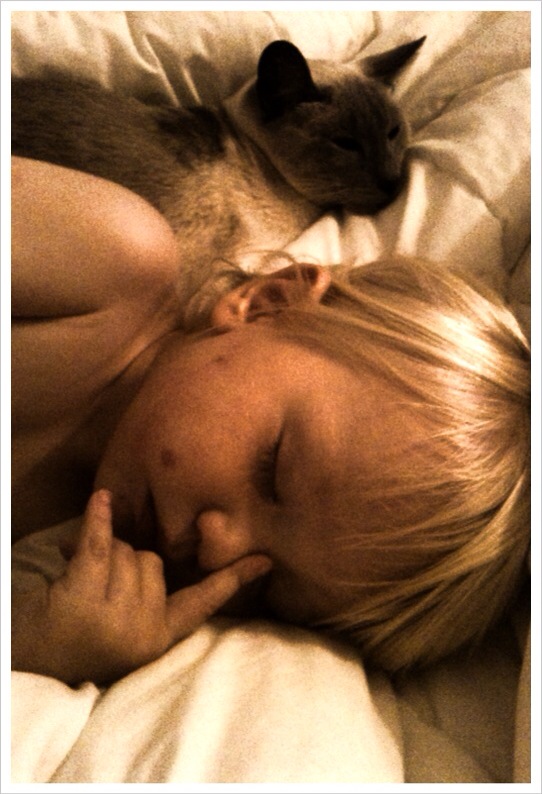 This is my wee boy, and his cat. My wee boy has been very sick, and his cat has been helping take care of him. Which mostly amounts to curling up nearby and providing nap companionship, but also involves attacking the humans who make the boy wail by holding him down and putting breathing masks on his face, which is a torture that the cat does not understand but recognizes as inhumane. So she attacks. I have the claw marks on my head to prove it.

I’m trying to not worry about the little man and his lungs. He’s a robust boy, a solid boy, a boy made for running and shouting. That his lungs might be compromised is inconceivable – I was a sickly child with respiratory problems that kept me in puffers and masks and that put me in hospital too frequently, but I was a frail, skinny thing, whereas Jasper… Jasper is the very picture of boyish strength, all hale chub and muscle and barely-contained energy, a wee Wagnerian hero ready to slay dragons, or stuffed purple dinosaurs, whichever gets in his way. That he might have inherited some of my physical vulnerabilities just seems wrong, impossible. This is not a child who should wear a breathing mask. No child should, of course, but Jasper… he just shouldn’t. My heart constricts every time we hold him still to get the mask on his face, hear his sobs through the clear plastic, feel him struggle.

And so, it seems, does the cat’s. And so she flings herself at my head, willing me to stop, insisting, with her yowls, that the boy does not like this the boy does not want this STOP MESSING WITH THE BOY and she grips my scalp with her claws and all I can is shake her off, and sympathize, and wish that I had somewhere to sink my claws and tell my frustration and worry and defend the boy against the misguided ministrations of Big People, but I don’t and I can’t because I am the Big Person and this is what it means to be a Big Person, to have to suffer the tears and tell everyone and oneself that it’s for the best and it won’t hurt a bit and Mommy’s sorry and we really have to do this this will make you better and honestly…?