That Place In The Sun

I’ve seen a lot of the world. I’ve traveled across Canada, and the continental U.S., and parts of Mexico, and most of Western Europe. I lived in Spain for two years. I’ve taken the train from Barcelona to Brindisi and a boat to Greece and  had a misadventure on a Greek island. I’ve canoed up remote lakes and hiked into the back-country of British Columbia and I’ve rafted the Thompson River, a few times. I’ve taken a tugboat up Indian Arm, in waters thick with jellyfish. I’ve traveled through the Mediterranean singing show tunes with a proto-Wiggles live stage show for children. I’ve taken my two small children, on my own, to Disney World.

The very best trip, though – the best of this year, the best of all years – the trip that I will hold tightly in my heart as yielding the most precious, sacred memories is this one: the trip that I took this past summer. The final leg of that trip, specifically, which took me to my mother’s home in Cache Creek, British Columbia, where I saw my father for the very last time. 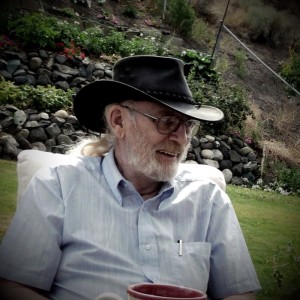 I didn’t know that it was the last time, and that was, in some ways, a blessing. We had our time, a few days, sitting and talking and watching the kids pick strawberries and make cocoa and frolic in the river. He met my friends. When we parted, he said that he had things to tell me, difficult things, things that he didn’t want to talk about during such a happy time, but that we would talk about them soon, really soon, and I implored him, as I always did, to consider coming to live with us in Ontario, to come and build a straw bale house in the woods that we own, in the middle of nowhere, with the deer and the quiet, just the way he’d always wanted, just how he’d always wanted. And he said, maybe, maybe. Maybe it’s time to do that. And, we’ll talk, soon. And, I love you, sweetie.

And we hugged, tightly, and I inhaled the sweet, smoky smell of him, and I wished that he would stay longer. But he couldn’t, and we said goodbye.

I would travel hundreds upon hundreds of thousands of miles to get to that place again, that place where I was in the first week of July in 2009, that place with my dad, that place in the sun. I can’t. But I will carry its memories with me, always, wherever I go.

On A Jet Plane

We Don’t Need Another Hero, And Certainly Not One Who Cries All The Time

Hello, America, How Are You?