Twelve Reasons Santa Might Be A Vampire, And Why That’s Kind Of Awesome

So, I was totally joking the other day when I remarked that Santa Claus was in some respects similar to Edward Cullen (note: if you are unfamiliar with Edward Cullen, none of what follows will strike you as funny nor make any kind of sense whatsoever. Do with that information what you will). Sure, the Santa of Santa Claus Is Coming To Town – the one who sees you when you’re sleeping, who knows when you’re awake – might be said to possess some of the same I Peek In Your Bedroom Window Because I Love You qualities as Edward, but really, Santa? A sparkly, red-lipped stalker? Who’s been known to chase down reindeer? Who has a penchant for cold? Don’t be ridicul —

Maybe I was on to something. 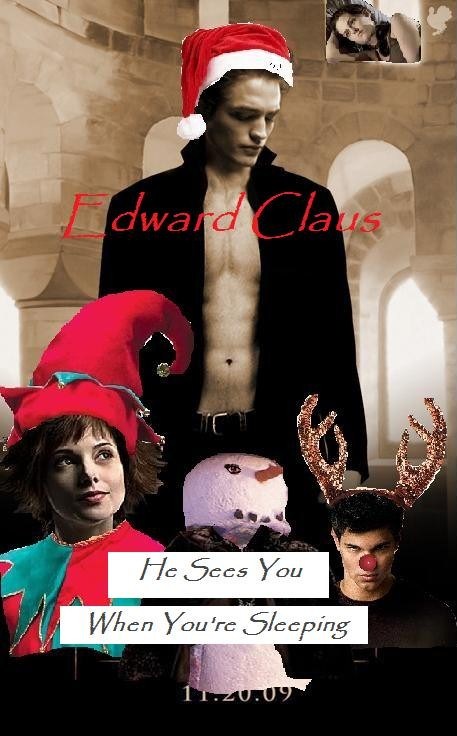 1.) The aforementioned night stalking. Edward loves Bella, and so he lurks around her bedroom at night, watching her sleep and listening to her mumble sweet-nothings about her secret dreams and desires. Santa loves the children, and so he remote-watches them while they sleep and eavesdrops while they mumble about visions of sugarplums and then, when the time is right, he sneaks into their houses and then back out again without making a sound. Edward and Santa are both skilled in the dark arts of benevolent stalking. Disturbing? Maybe. But when was the last time you told your kids that you wouldn’t be letting Santa in the house because love means never watching people when they’re sleeping?

6.) And then the Volturi would have killed Santa, too, for sure.

7.) Santa and Edward are both pretty white.

8.) And sparkly. Okay, so Santa twinkles, but still.

10.) Somebody has almost certainly composed a song that contains the lyrics “I saw Mommy kissing Edward Cullen/Underneath the mistletoe last night.” That somebody might be Stephenie Meyer.

11.) Or any one of the eleventy thousand Twilight Moms in North America, any number of whom, you just know, have Edward stockings hung by the chimney with care, right next to the cookies for Santa, who, did I mention? Sneaks into houses at night.

12.) That Christmas carol about asking Santa for two front teeth for Christmas? TWO FRONT TEETH? Come on. If that’s not code for make me a vampire, I don’t know what is.

12.) Did I mention? Sparkly denizens of the night.

13.) (Bonus!) Edward and Santa are both, end of the day, figments of imagination, and stories about them make people happy. And if they both spread some variety of happy (Edward-inspired happiness is more of a kind of tingliness, but let’s not parse that right now)  – and/or can be used to intimidate recalcitrant offspring into submission – then I, for one, am all for it. Sure, I might laugh at you a teeny bit more if you have an Edward stocking than I would if you wear Santa-print jammies, but there’s still be a part of me, in both cases, admiring your commitment to the fantastical, sparkly, God-bless-us-everyone-even-the-vampires spirit of Christmas. Team Christmas, I salute you.

Now I’m going to have to go rethink the Grinch. He was probably a Volturi.

The Week That Was (Pink Earmuff Edition)