If Prayers Were Horses, Grievers Would Ride

Emilia wants to know what happens when we die. She asks a few times a week, on average, sometimes more, sometimes less, depending on whether or not we’ve spoken about my dad or about Tanner or about dinosaurs. Today, she asked because they’d been talking about the Easter story at school. She wanted to know why Jesus got to fly up into the sky, and Grandpa didn’t.

You burned him, didn’t you? she asks. How could he fly after that?

Explaining death is one thing. Explaining the cremation, the afterlife and Divine resurrection are something else entirely.

We’ve had a lot of these talks. We’ve been having them since my dad died, since she watched me collapse and shatter into a million tiny pieces and wanted to know why. They’ve been good talks, but I fear that they’ve been better for me than they have for her: she has grounded me with her questions, and given me solace with her answers. Because she has her own answers, she pulls them from the sky or the stars or the spirits or her soul and she lays them bare and shares them with me, her stories, the stories that she weaves to make sense of all this mysterious loss, this loss that I can’t explain, lapsed, struggling Catholic that I am, groping for a faith that eludes.

This is why I am failing at this: I have no answers for her. I have no answers, only wishes, only hopes, only deeply held hopes that I ache to grasp with certainty, but which remain – for me, who is grasping at that lost faith, that faith that once upon a time held answers – ephemeral, evanescent, faint. So when she asks me, where did Grandpa go, I say, I think that he went to a place called Heaven, a wonderful place full of love and light where we will someday see him again, and I cry as I say it, because I don’t know for sure, and I wish with every particle of my soul that I did know, that I could know, because I would give anything to know, anything. And she says, in the softest of voices, I know where he is. He’s in his Death House, the one that I made him, and someday we will go there.

I know that you think he’s in that box, but he’s not, he’s in his house in Heaven, and we’ll go there someday, and you’ll see, and you’ll know.

And my heart expands, and breaks.

My friend Kate, who has known terrible loss, wrote the other day about thumb-wrestling with Death as she prepares for the death of her grandmother. She didn’t like doing it, she said, not least because he has longer thumbs, which I imagine is true. She asked her readers to not leave condolences, but, instead, memories, of their mothers, whose flour-dusted hands wiped tears and whose lipsticked mouths left kiss-marks and whose warm arms were the safest place in either earth or Heaven, so that we might reflect upon motherhood persisting against and beyond death, and I said this:

I’m sorry. I wanted to say something lovely, about my mom’s belly laugh and her twinkling eyes and her perverse imagination, the one that conjures alligators in closets for my daughter to hunt and her ability to bake a lemon cake, right on the spot, just because you asked. But I’ve been having nightmares.

I have been having nightmares, nightmares wherein my dad is already gone and then my mom goes too and I am left to suffer the pain of my greatest fear, the fear that drove me to sleep on their bedroom floor at night, the fear that kept me from sleepover parties and sleep-away camp, the fear of losing them, of being left alone, an orphan. When I was child, my good Catholic parents would comfort me and soothe me and brush my hair from my tear-dampened cheeks and tell me that they would never leave me and I clung to that, even as I knew it to be false, I clung to it, and when I flew west to deal with my father’s death some months ago (an eternity ago, a second ago) I sat in my seat on the plane and cried and cried and cried like the little girl that I had suddenly become again, having flashed backwards in time to that experience of knowing that it would happen and that it would hurt, bad, worse than anything else I could imagine, and then flashed forward again to discover that yes, yes, this is exactly how it feels, and it is terrible, horrible and bad.

And so now I am terrified of having the loss compounded. And I am terrified of communicating – directly or indirectly, intentionally or not – this terror to Emilia, who is too astute, who knows too well when I am sad or afraid and who knows the difference between my sadness and my fear and wants to understand them. But I don’t want her to understand them, I don’t want her to think about losing me, because I want to forestall this pain for her, even as I shudder at its inevitability.

I have nightmares. And my only solace – my lifesaver, my heartsaver, the backbone of my soul armor – is, really, my daughter and her kindergarten theology, her insistence that it will all be okay, that we will all end up at happy place, that she knows this, because we must, because it is true.

I hold her to me tightly, and weep for this, in gratitude and shame. 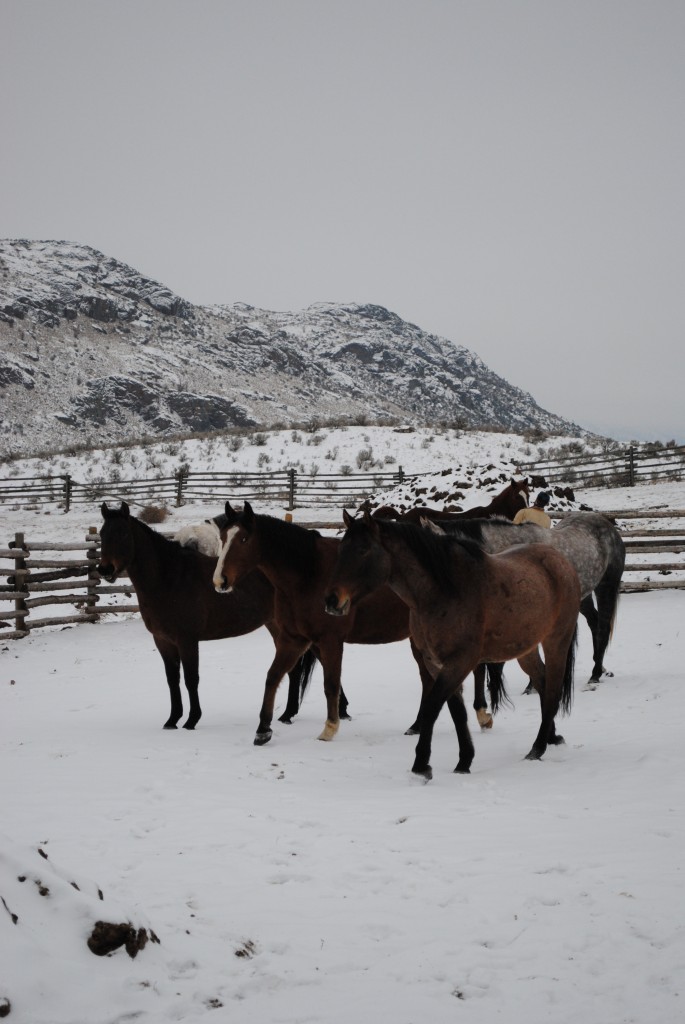 Are there horses in Heaven? — I don’t know; what do you think? — Did Grandpa love horses? — He did. — Then there are horses there. Someday, I will ride them.

This post was inspired by a discussion that was shared between me and some very good friends – Lindsay, Loralee, Julie and Devra – at Mom 2.0. We curled up on the floor of the bedroom of the Four Season’s Presidential Suite during the CheeseBurgHer party and talked spirituality and faith, grief and loss, prayer and meditation and all variety of confused and confusing things. And then Lindsay decided that maybe we should explore some these questions (like the one I’m struggling with above, talking to kids about death) together, on our blogs. So we are. You’re welcome to join in. Leave me a link if you do. Or just speak your piece in the comments. Talking, maybe, will bring enlightenment. Or maybe more confusion. Either/or.

PS: I offer another, somewhat less morose reflection on navigating the waters of loss with children over at Their Bad Mother. Because once I start talking, I can’t stop.