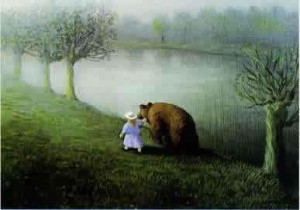 My mother was and still is an inveterate teller of tall tales, especially in conversation with children. She delights in the wide-eyed fascination of children with all things fantastic, and decided very early in her career as a mother that it was part of her job to keep the eyes of her own children and those of any children who accidentally wandered into range of hearing as wide as possible.

Accordingly, I grew up in a home in which it seemed entirely possible that there were sea creatures living in the plumbing and gnomes hiding in the closets. There were fairies and elves and imps and other magical creatures in the woods behind our house, and they lived in harmony with the animals there – the squirrels and birds that I saw every day, and the raccoons and skunks that I saw less often but knew well from the tracks in our backyard, tracks that my mother was very careful to point out and explain as evidence of the late-night forest creature moondances that occurred a few times each month. I knew that the forest creatures maintained harmony in their community through the frequent town-hall meetings that they held in a mossy stump – I knew this because my mother showed me exactly where they all sat during these meetings and held up various broken twigs and branches (used as benches) as evidence. I knew that I should never, ever pick toadstools, because if I did so I would be destroying the shelter of the littlest creatures of the forest.

I also knew that my sister and I came from a cabbage patch, and that if we unscrewed our bellybuttons, our bums would fall off. When I got old enough to start doubting these tales, I would confront my mother upon each telling: are you telling me a story?

Of course I am, my darling, she’d reply. But that doesn’t mean that I’m not telling you the truth.

There are some who insist that telling stories is lying, and that lying to our children undermines our credibility as parents. Do you tell your child that Santa (or God) wants them to put their toys away? When your child asks where the sun goes at the end of the day, do you tell them the truth or do you say, a la the Von Trapp children, that the sun has gone to bed and now must they? If you do, you are lying – say those who do not believe in the power and utility of stories – and by lying you are undermining truth, and by undermining truth you are undermining reason, and undermining reason is harmful, and bad.

I think of my mother when I consider these arguments because my mother never let the hard facts get in the way of a good story. She had it on good authority that the sun left our neighborhood at the end of the day so that he could go light up the neighborhoods of other children, who needed light so that they could play outside. She also had it on good authority that Curious George’s favorite food was lima beans, and that both God and Santa were always very happy when I picked up my toys. She knew the Easter Bunny’s phone number and corresponded regularly with Tatiana, Queen of the Fairies. She told me about the phone calls and shared Tatiana’s letters. If I was attentive and careful and respectful of animals and nature, she told me, perhaps one day I could correspond with them, too.

The question is, was this deception? And if it was, does it matter?

In Plato’s Republic, the character of Socrates explains that there is a very great difference between a noble or fine lie, and a lie of the soul. The latter is the sort of lie that deceives in the most fundamental way – it turns a soul away from truth, puts that soul (understood as the seat of reason, among other things) on a path to ignorance. This is the worst kind of lie, because it corrupts the part of our being that is most uniquely human – that is, our reason, our ability (and desire) to seek out truth. The noble lie, on the other hand, tells the truth figuratively. Plato, among other classical philosophers, suggested that not every human soul was capable of perceiving and comprehending ‘truth,’ but that every human soul – every soul possessing the uniquely human faculty of reason, even in its most nascent form – could be turned toward truth. Set on the right path, oriented toward more correct opinions. Noble lies accomplish this work – they orient the souls of those who aren’t able, or are not yet able, to pursue truth directly.

When my mother told me that toadstools were shelters for magical creatures that I couldn’t see, she was, it might be argued, telling me a noble lie. Her lie did not obscure the truth; rather, it illuminated part of the truth for a mind that was not ready to perceive it in its fullness. Toadstools do indeed protect and nurture many creatures that human eyes cannot or do not see, and I should indeed be respectful of toadstools, and other flora and fauna, when I come across these. They are not mine to trample or use for my own amusement, and there is far greater potential stimulation to be gained from them in appreciating them as the remarkable works of nature that they are.

A very young child might not be capable of understanding the laws of planetary motion and the principles of a solar system, but she can understand that the sun has disappeared from our view, that it does so every day, and that it has something to do with the cycle of the day. We can explain that straightforwardly, or we can wrap it up in a story. Wrapping it up in a story presents the truth, or some portion of the truth, in terms that a child can understand. In terms that capture the child’s imagination, and so their curiosity.

There is something to be said for serving up the truth straightforwardly to children – for telling them the facts about the movement of the Earth and the sun, and the facts about the North Pole and about existence or non-existence of Tooth Fairies, and the truth about how little we know about what happens to us when we die. I certainly believe that we should never underestimate children’s capacity for reason, and their ability to appreciate and understand ‘facts.’ And I believe strongly that the ‘truth’ – so far as I or anyone understands it – about the natural world and everything in it is as fascinating as any story that my mother ever concocted.

But I also think that what we gain from wrapping the truth in a story – and, occasionally, weaving fantastical tales that seem to incorporate no measure of truth – is this: we communicate to our children that the world is not prosaic, that it is a place of wonder. We teach them that the world, that life, holds many unanswered questions, and that even those questions that seem to have been settled are worth interrogating. We teach them to believe, and to doubt. We provoke their curiosity – we make them lovers of discovery, which in turn makes them lovers of wisdom. Philosophic puppies, as Socrates had it, but only in the best sense: joyfully bounding towards that which they do not know. Experiencing the unknown as an opportunity for play.

Still… my mother’s insistence, for years, that if I unscrewed my belly-button my bum would fall off is clearly an example of maternal deception. As was her insistence that there were never any mushrooms in her spaghetti sauce, that marshmallows were made of whipped cloud, and that if I lied the bottom of my tongue would turn black. And there’s an argument to be made that the belly-button lie might have contributed in some small part to some body-image confusion. But do these lies matter? My mother approached motherhood, and every second of interaction with her children, as an opportunity for fun, and my experience of childhood was entirely shaped by this ethos of laughter and discovery and play. And it had everything to do, too, with developing my love of story and books and ideas (supported, obviously, by the abundance of books in our household and weekly visits to libraries, but that’s another post.)

None of this is to say that deception qua deception, deception in the form of lies of the soul, should be embraced wholeheartedly. Only that it might have a place, alongside the nobler, poetic forms of lying, in making the worlds of our children rich and vibrant and alive with possibility. So it is that when my daughter asks me, are you telling me a story? I tell her, yes, yes, I am. But that doesn’t mean that it isn’t true.

(What do you think? Do you tell your children stories in this way? Or are you a committed rationalist? Do YOU believe in Santa? And – what fantastical stories did your parents tell YOU? Do YOU tell?) 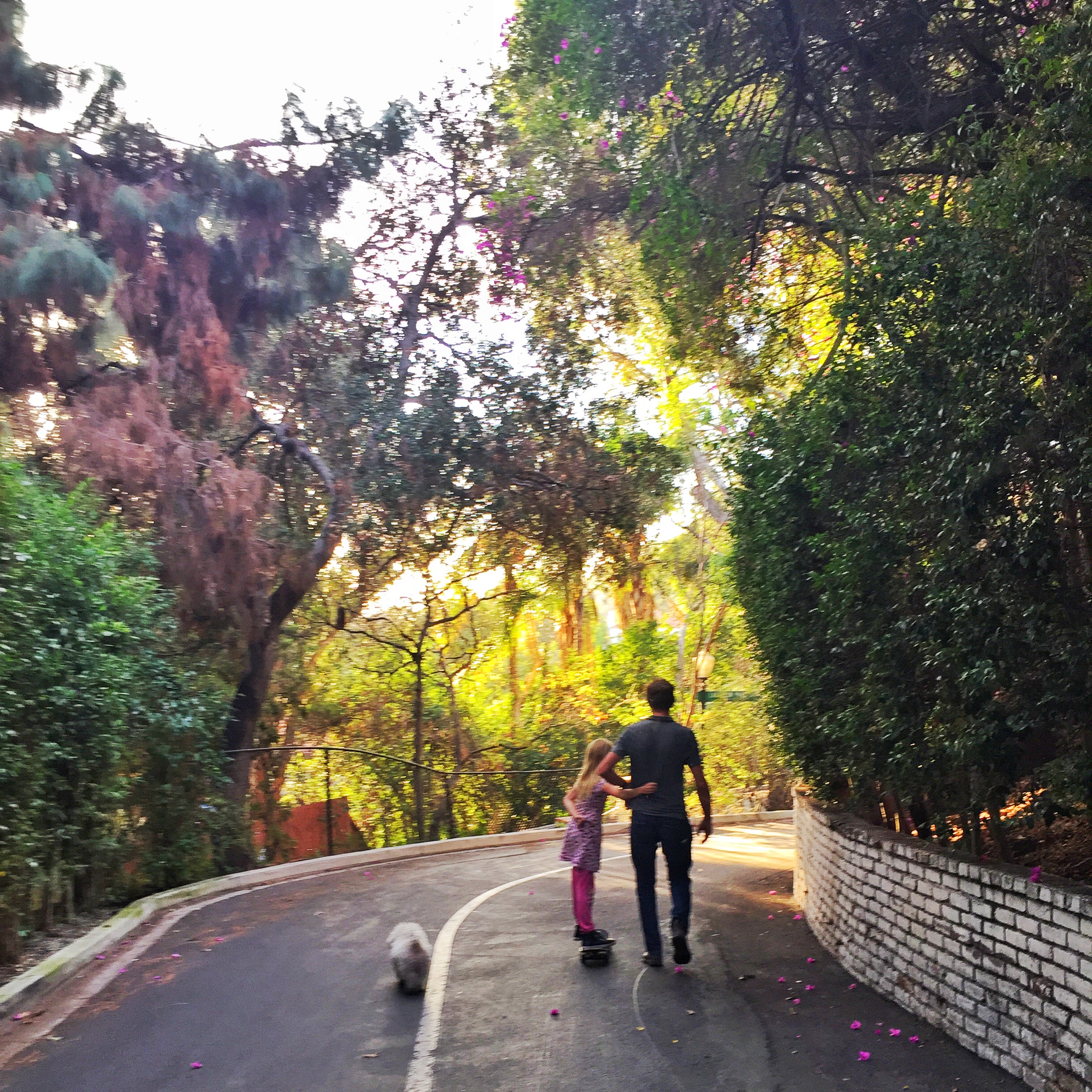