Coloring Between The Lines 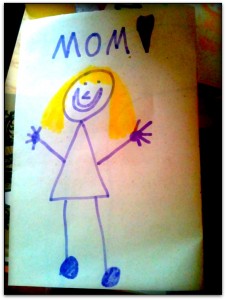 There are things that one knows about one’s self, and things that one doesn’t. I know, for example, that words make me happy and that I love my children and that I can, when I try, be very funny, and that I am introverted (yes, really) and that I am good at philosophy and at making soup and that I love the smell of lilacs. I know, too, that I am prone to anxiety and depression, but that I am able to cope with these with the help of the love and support of my family and by writing and with a certain quantity of pharmaceuticals. What I don’t know is how big a role my proneness to anxiety and depression plays on the stage of my psyche – whether it is a starring role or a bit part, whether its strutting and fretting defines the production in some critical way or is just a nuance, just theatrical flair – and whether, or the extent to which, it shapes who I am. What I also don’t know: how much it effects how my children regard me, and how they will remember me.

My paternal grandmother was, to use the vernacular, crazy. To the best of my knowledge, she was never diagnosed with a specific mental condition, but according to my parents, she was bonkers. My use of words like ‘crazy’ and ‘bonkers’ is inappropriate, I know, and a practice that I deplore in others, but ‘crazy’ was how I understood her, my Dad’s mother, as I was growing up. I never met her – my mother told me, later, that she had been terrified to let her babies, us, within ten feet of her – and my parents were, of course, very careful in the language that they used to describe her to me when I was growing up, but I’d gotten bits and pieces of the story by eavesdropping and asking annoying questions – Dad had been afraid of her, Dad had left home very young to get away from her, she’d died when she set her own house on fire – I understood, I read through the lines. She had been crazy.

I don’t blame her anymore; I know more of the story now, and although it is a truly hair-raising story, I know that it’s a story of mental illness. But in a way that knowledge has made it worse: she wasn’t a monster, she was a woman with an illness, but that illness is something that she might have passed on to her son. That she might have passed on to me. That I might pass on to my children. This terrifies me.

This terrifies me, not only because I fear for my own mental stability – if this is genetic, is it beyond my control? am I genetically fated to be crazy? (the research calls this ‘self-guilt’) – and for that of my children – are they genetically fated to be crazy? – but because it colors my memory of my father, who, although he struggled with anxiety and depression and, really, just a whole lot of sadness, was a light in my life and a source of great joy to me. He was gentle and kind and wise and although I always knew that he held a very great grief in the deepest part of his heart, I also always knew that that grief was overpowered by love. But when I dwell in anxiety about my own mental state – my own griefs, my own fears – and the genetic heritage of this state, I lose this part of him; my memory of him becomes achromatic, desaturated, a fog of gray and sad. I hate this. And I fear that my children will inherit it, that they will someday fret over their mental wellness and that this fretting will cast a pall over the memories of their childhood and that they will see me that way, in a fog of gray and sad.

I fight this by fighting my battle with anxiety and depression, and by endeavoring to fight it out of their view, but I worry about this, about this concealment of the gray and the fog and the sad. My paternal grandmother lurks in my memory like a shadow, a sinister one, and she does so because I did not know her and did not know her story and by the time I learned her story, and my father’s story of her, she had already settled into her spectral shape. The details, now that I know them, are secondary; brushstrokes of oils over an image whose paint has already set. My father never explained to me why he struggled, beyond the barest sketch, and so I just colored in between the lines, and sometimes over them, and I worry whether my children will do this, too, that if I conceal my own story, or keep it deliberately vague, they too will fill in the outlines of that story with their own colors, or uncolors, achromatic grays and blacks, and regard me through that fog.

So what do I do? Do I reach for as much honesty as I think that they can handle, even now, when they are so young? I discuss grief with Emilia – it is necessary to discuss grief with her, when it keeps so close to us – and she has learned, already, that there are different kinds of sad and different kinds of worry and that not all of these, perhaps not any of these, are ‘bad,’ but do I – can I – extend that discussion to those times when Mommy has a headache / Mommy is tired and break for her that code that conceals the truth of Mommy is anxious / Mommy is sad? Or do I wait until she – until they – are older, and then explain in more detail this experience, this thing that I struggle with, this thing that may or may not have anything to do with the thing that my dad struggled with, with the thing that my grandmother struggled with, with those things that are not monsters, not necessarily, not if you drag them out of the closet and sit with them in the light?

(Thank you to award-winning author Linda Gray Sexton for sponsoring this series, which is inspired by her memoir Half in Love: Surviving the Legacy of Suicide. I was selected for this sponsorship by Clever Girls Collective which endorses Blog With Integrity. To learn more about Linda Gray Sexton and her writing, please visit her website.)