Down The Rabbit Hole (An Excursus On Infinity, The Easter Bunny And Russell Brand)

So I went to Los Angeles the other week. While I was there I hung out with Russell Brand and we talked about mommy bloggers, and also post-structuralism, and infinity.

Russell Brand:  ‘Mummy Bloggers’ sounds like a nice saying. What if… it becomes so incorporated into language, so people would just use it normally?  “There’s a Mummy Blogger outside!  For heaven’s sake, help her!”

Me:  Or, in your case… “I was tackled by a horde of Mommy Bloggers!”

Russell Brand:  “I was having a lovely time with some Mummy Bloggers and you’ve ruined a perfectly lovely day.”

Me:  You’re turning it into “mummy,” though.

Russell Brand:  “As a MOMMY blogger (exaggerated American accent), do you like this product for your child?”  Is that what it is?  “Well, I have been using those diapers on my Zachary and I must say his nappy rash has cleared right up.”

Russell Brand:  We say “nappies” and “bins” and “lorries” in my country.

It’s worth pointing out here that I was not alone with Russell Brand. You probably already guessed that, because a) who would leave me in a room alone with Russell Brand? and b) that discussion about ‘mummy bloggers’ only ever talking about ‘nappies’ would have turned into a fight, and the fact that it didn’t is probably evidence enough that there were more reasonable people in the room, people who urged the discussion back to the topic that should have been at hand, the movie Hop, which was the reason for the trip to LA and the stay at the Four Seasons Beverly Hills and all that other stuff that is way less interesting than the fact that we were hanging out around a table with Russell Brand. Anyway.

Me:  We have been informed that the rabbit (in the movie) wasn’t real. Now, is this or is this not true?

I have got a double identity where, by night, I transform into a rabbit, which is a difficult and painful process where my fangs grow and my fur grows and I contort like a werewolf.

Me:  So when somebody comes to you and says, “We would like you to play the Easter Bunny,” as a comedian, do you say to yourself, “Now, that’s funny,” or do you think, “well, I don’t know about that.”

At which point – the point of asking cliched questions about the actor’s ‘motivation’ and ‘inspiration’ – it only seemed polite to let other people in on the conversation.

Some other blogger:  Chris Meledandri talks about the importance of having characters be endearing and enduring.  So, what is it that makes EB (the aforementioned rabbit who – SPOILER – has some relationship to the Easter Bunny) memorable?

Russell Brand:  Well, firstly, he looks crazy.  He’s a rabbit and he doesn’t have any trousers or pants on.  (SPOILER: PANTSLESS rabbit.) That’s peculiar.  I remember that, myself.

And he has an evocative and playful spirit.  The rabbit is a symbol in Native American mythology of the trickster, often seen as the messenger between gods and man.  Like Prometheus in ancient myth, who nicked fire from the gods, rabbits are almost mischievous.  They’re always nicking your crops if you’re an agricultural type person.

They’re playful little things, lovable and sweet. They have little twitchy noses. I did have one as a kid.  He bit me there.  And if you get a rabbit bite, no one really cares. It isn’t like a shark bite.  “I was bitten.”  “What?”  “By a rabbit.”  “Ah.”  But it still hurts.

Me:  The (SPOILER ABOUT CANDY) defecated jellybeans, I don’t recall those from ancient Greek myth.

Russell Brand:  Well, there is a very ancient idea like Prometheus stealing fire or Orpheus going into Hades to get his wife back and stuff.  It’s been placed into the semiotics of children because they’re colorful beans and candy, recognizable signifiers, but it’s still the idea of alchemy and transformation, magic making, mirth making, and trickery.

The transcript, at this point, is heavily edited, which I suppose is understandable because there ensued some – more or less inscrutable and totally un-PR-friendly – discussion of the post-structuralist problematic of childhood myth-making and its relation to the story of the Easter Bunny, and, also, what exactly was signified by the (SPOILER) jellybean-as-bunny-feces motif as presented in the movie. And that’s fine, because nobody wants to come off as trying to intellectualize a movie about the Easter Bunny, unless you are Russell Brand, and nobody else wants to come off as trying to match intellectual wits with the star of an Easter Bunny movie in the arena of intellectualizing an Easter Bunny movie, unless you are me.

I might have also said something about existential phenomenology in contemporary children’s cinema, and also, possibly, the decentering of the intellectual universe qua Derrida, but I’ve blocked that out.

Me:  Did you ever or do you now believe in the Easter Bunny?

Russell Brand:  I believe in the possibility of all things because of the nature of infinite space. If the universe is infinite, that means, inevitably, all possibilities exist.

Right? I totally could have brought up existential phenomenology and it would have fit right into the discussion.

Me: And you access these infinite alternate universes through… rabbit holes?

All of which proves, I think, that if there is one person who you should not send to interview celebrities – not least celebrities who will wax British about mummy bloggers and attempt to incorporate post-structuralist theory into the promotion of their own movie – that person would be me. 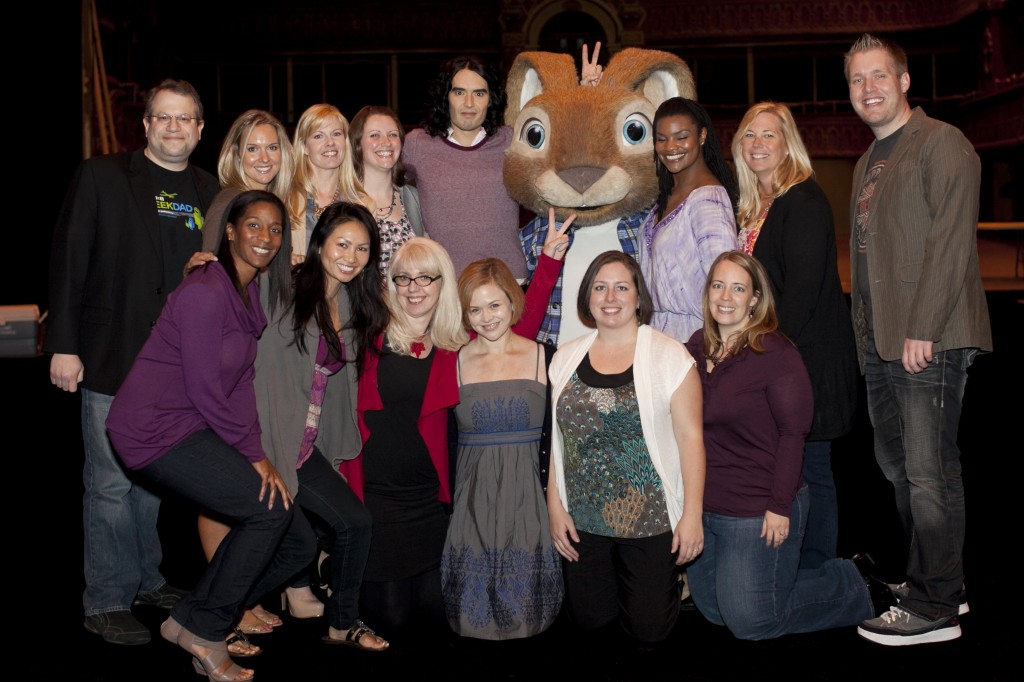 Then again, I’m the only one other than Russell Brand who knew that we were supposed to do rabbit ears. So.

In Lieu Of Deep Thoughts On The Celebration Of Easter, I Give You This

Less Is More, Especially When It Comes To Robotic Hamsters

A Dinosaur A Day Keeps The Bunnies Away