Sacrifice And The Mom

At the closing keynote session at the Mom 2.0 Summit the other week they showed a promotional clip for Oprah’s new network. In it, Oprah made a few remarks about why she never had children. “I realized that I didn’t want to make the sacrifice,” she said, “and motherhood is about sacrifice.”

Ugh, I thought. Sacrifice. I like the word sacrifice about as much as I like the word ‘goatspit’, which is to say, not at all. The word ‘sacrifice’ makes me think of ancient Spartan war rituals and that one Indiana Jones movie where that they tore out people’s hearts and flung them into pits of fire, which, sure, is maybe an appropriate analogy for parenthood some days, but still. And sure, the word ‘sacrifice’ can also be considered alongside the words ‘selfless‘ and ‘suffer’ and ‘heroic’ and we get into that vast, overwrought territory of saints and prophets (of the variety that Machiavelli called ‘unarmed’) and the characters of that particular brand of Canadian literary fiction that follows the lives of generations of prairie or Maritime women and that always features at least one rape and two deaths and endless pots of thin soup and I still don’t like those words. Especially as they are applied to mothers, which they so often are, because seriously. This ain’t no sacrifice.

Okay, so maybe in the strictly conventional usage of the term ‘sacrifice’ – to give something up in order to attain something of greater value – parenthood involves sacrifice. I gave up months of sleep, the freedom to spend an entire weekend on the sofa watching Buffy reruns, and C-cup boobs, among other things, when I had children. Under the very narrowest of terms, I suppose, you could say that those were sacrifices. I don’t really see them that way, though. They weren’t all that much to give up to have children, because I wanted to have children. Maybe if you’d suggested to me when I was 25 that I give up my marathon Buffy weekends in order to have kids, I’d have considered that a sacrifice – a sacrifice that I would not, at that point in my life, been prepared to make – but once I’d decided that I wanted kids, my choices were pretty clear, and not all that difficult to make. Of course I’d give up Buffy marathons, and sleep, and perky boobs. If I valued these things so highly that giving them up would represent a sacrifice – in the classic sense – I don’t know that I would have been so keen to have children.

I thought about this when I read this post at Jezebel last week – Life Without Kids Means More Arctic Monkeys Concerts – which considers an article at Details about a ‘growing social trend’ towards not giving up diners at Thai restaurants and Arctic Monkeys concerts in order to do something so costly, time-consuming and banal as having children. Which made my brain hurt. If going to Arctic Monkeys concerts is something that you value more highly than having children, or even if giving up Arctic Monkeys concerts is simply something that you’d find painful and difficult, don’t have children. It’s not all that complicated. And – this is important – it’s not the basis of a trend. Someone who wants to have children – whether that’s something that they’ve always wanted or something that they, like me, only realize that they wanted when they turned 34 and their doctor told them that their ovaries weren’t getting any younger – is not going to decide against having children just because they suddenly realize that the sacrifice is too great, if that ‘sacrifice’ consists in giving up concerts and weekly outings to Thai restaurants, or, even, perky boobs. No, no… I just realized after I read that Details article that I loved the Arctic Monkeys too much to give up just to participate in the miracle of creating life. I kinda always thought that I would have kids, but then I realized that I am just not willing to make that sacrifice.

Oprah’s notion of sacrifice was a little more robust, granted; she made her pronouncement regarding the sacrificial demands of motherhood and acknowledged her unwillingness to meet those demands as images of the set of her show and of her adoring fans flickered across the screen, and one couldn’t help but nod sympathetically. Yes, if I ran a vast multimedia empire and had a following of billions of women who laughed and cried and cheered at my every word, I might consider it a ‘sacrifice’ to give that up for motherhood, but then again, who says that I would have to give up those things – or, more reasonably, the possibility of those things, or things like them (like, say, a busy and fulfilling career) –  in order to become a mother? Does anyone ever ask presidents or prime ministers or captains of industry – of the male variety – whether they considered ‘sacrificing’ it all to become fathers? Don’t they just, you know, become fathers? Do we even talk about paternal sacrifice in the same way that we do maternal sacrifice? What is up with that?

It’s different for mothers, of course. I know that. There are all sorts of pressures and expectations and challenges that mothers face that fathers do not, and, yes, it would be a more complicated thing for Oprah to become a mother and maintain her empire than it was for, say, Bill Gates to become a father and maintain his. But it’s not an impossible thing, and I think that the rhetoric of maternal sacrifice – the rhetoric that tells us that we have to give up so much to have a family – just contributes to the persistence of the pernicious idea that motherhood is this all-encompassing, all-consuming thing that absorbs us completely and demands everything of us, everything, and to the corollary idea that women should be willing to give themselves over completely to the Mother Borg, and give everything up to have children, because otherwise, what are you, a unwomanly baby-hating monster? Sacrifice is what women do, y’all.

Motherhood can absorb a woman completely, if that’s what she wants. But it doesn’t have to, nor should we expect it to. Here’s a surprising fact: you can have babies and still go to Arctic Monkeys concerts. You can have babies and still go out and eat Thai food. You can have babies and still pursue a career. You can have babies and still go out and do pretty much everything that you did before you had babies, except maybe fit into the same size bra, and even then there’s still Victoria’s Secret Angels Secret Embrace cleavage-boosting underthings. Sure, it’s not as easy as it might have been before you had babies – it requires more time and resources, to say nothing of a babysitter or a nearby relative who’s handy with diapers – but it’s still possible. And here’s another thing: even if you have babies and discover that you are not, in fact, going to as many Arctic Monkeys concerts or eating at as many Thai restaurants or pursuing that career as aggressively, you will never, I promise you, say to yourself – and really truly mean it – I wish that I could turn back the clock and make a different choice, or maybe just trade these babies in for some more Thai food/a steeper career arc/more opportunities to see Arctic Monkeys concerts. Or maybe you will, but in that case I sort of suspect that you’re the sort of person who might have been swayed by the sorts of arguments that the Details article sets forward in the first place.

Motherhood simply doesn’t lend itself to a felicific calculus, because there is – to borrow from Jeremy Bentham’s utilitarian measurements – no purity to the happiness that comes with parenthood. That is, we can’t speak of a happiness, within the context of parenthood, that doesn’t involve feelings and sensations of the opposite kind. Bentham’s utilitarian calculus of happiness held that it should be measured along that and other axes – how intense is the happiness? how proximate is the happiness? how pure is the happiness? – but parental happiness defies such measures, because it is a whole and complicated emotional condition in which there is no meaningful distinction between love and fear and joy and pain and exhilaration and exhaustion, between conventional happiness and its opposites. Our love and our joy are enriched and deepened by our fear and our anxiety, and vice-versa. And so it makes similarly little sense to speak of maternal/parental sacrifice in the classic mode, unless you are speaking of a mother or father’s willingness to throw themselves in front of a bus for our kids, which most of us would do, of course, even – yes – when the little badgers have kept us awake for nights on end and puked on our favorite shoes. Sure, we give things up, but the giving up of old things is part of the movement of parenthood, of the expansion of our emotional life (we might borrow liberally from Corinthians here: when I was a child, I spake as a child, I understood as a child, I thought as a child: but when I became a mother, I put away childish things. Substitute ‘free-wheeling young woman who loved having the freedom to watch 12 hours of Buffy reruns’ for ‘child’ and you’ve basically summed it up.)

The rhetoric of maternal sacrifice obscures the complicatedness of maternal happiness. At its worst, arguably, it demands that we force our understanding of that happiness into an oppressive binary, wherein we calculate the costs of motherhood (the exhaustion, the anxiety, the ruined shoes, the pressures on any outside career) against the benefits (babies! squee!) and try to massage the numbers into an acceptable sum, rather than consider the whole thing holistically, as the rich and complicated tangle of experiences and feelings that it is, and accept that its rewards are entirely dependent on – are made meaningful by – those things that we want to call ‘costs.’ Like not being able to go to an Arctic Monkeys concert whenever we want, which, whatever. I’m not even sure who the Arctic Monkeys are. That probably invalidates half my argument here. Or maybe it confirms it. 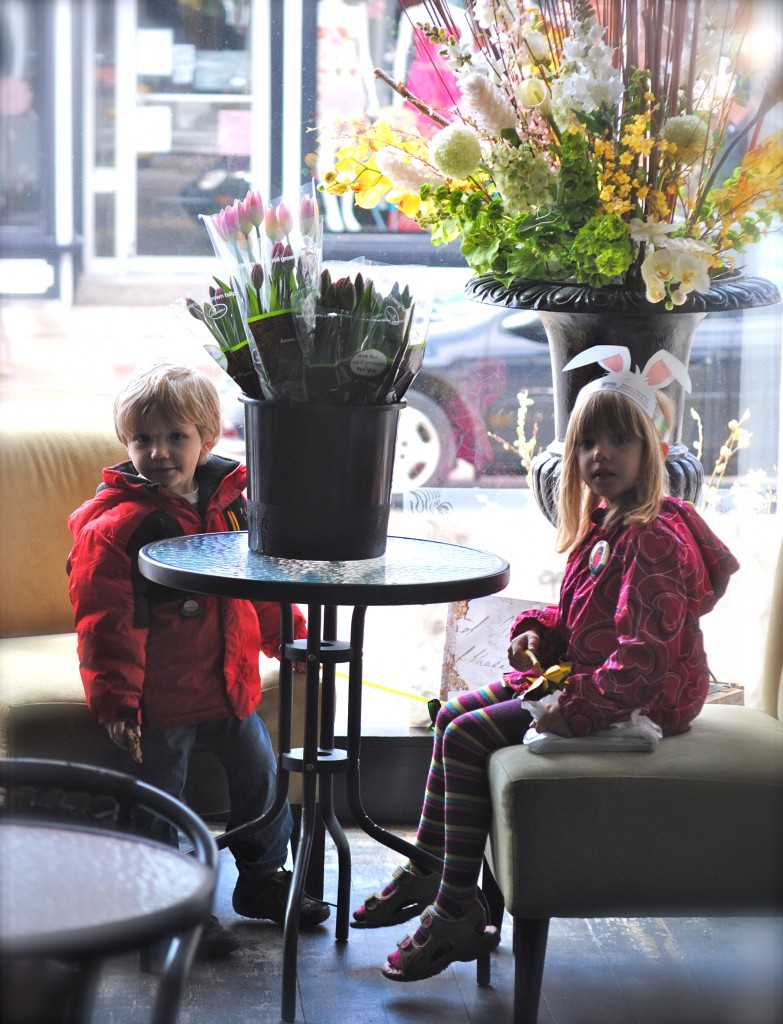 I know that these things are not true for all women, in all places, at all times. I know that my insistence upon the non-sacrificial character of motherhood is informed by my privilege. But I also know that most of the discussions about the whys and wherefores of parenthood and the supposed sacrifices that parenthood entails take place among the privileged – the Arctic Monkey concert-goers, the Thai food restaurant diners, the careerists, the Oprah emulators, all of us who freely choose or do not choose to have children – which is, I think, just all the more reason to interrogate it. Why call it sacrifice? Why not call it, simply, choice?

Answers to those questions are welcome and encouraged. Also, defenders of the Arctic Monkeys – speak your piece. Although maybe explain to me who they are, first. Are they awesome? Maybe I would trade my kids for Arctic Monkeys tickets. I’m open to discussion.