We Are All Habiba

This is a horrible, horrible story:

On Saturday the 4th of June ago a well known Spanish children’s psychiatrist, Dr. Ibone Olza, who also works for the main organization in Spain that campaigns to protect the rights of women and children at birth, “El Parto es Nuestro” (Birth is ours). Informed some of us via Facebook that a Moroccan mother, Habiba had been separated from her 15 month old daughter while she was in the care of a shelter, IMMF Instituto Madrileño del Menor y la Familia (Madrilean Institute for the Minor and the Family), she had accepted to go to this shelter due to her bad economical situation. Apparently this shelters have a psychoterapy/maternal habilities program that involves taking medication to stop the milk production, as breastfeeding is considered “chaotic” and “damaging” and also because it will make more difficult putting the child for adoption if this need arises.

When Habiba refused to follow this regulations the centre decided to separate mother and daughter, without following any legal procedure, without allowing her to say bye to her daughter and without communicating to her where were they taking her baby. After this and since the shelter is is a centre for parents with their children, since she longer had no child, the centre put Habiba back on the streets.

Habiba has only very limited access to her daughter now, and during the brief periods of time that she is allowed to see her, she is not allowed to nurse her. I feel sick for her, and for her daughter, and for any mother who has been forced to wean her child, at risk of losing that child, in Spain, or anywhere. Horrible. 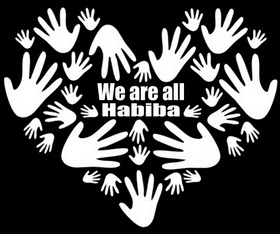 You can read more about the story at Amor Maternal, where you can also find links to other posts on the story (in Spanish), and there’s a petition at the site that I cited above (this site also has a full explanation of the story, and links to Spanish news coverage of the story). There are also two Facebook groups in support of Habiba – this group in Spanish, or this international page with other translations.

Please consider lending your name in her support. And please pass this story along.

I Don’t Take My Shirt Off For Just Anyone, You Know

In Moms And Boobs We Trust. Or Not.