What’s In YOUR Bag?

For a long time, I used a diaper bag for everything. It was a pretty cool diaper bag, one that cost way too much money – like, designer-handbag-too-much-money – and I figured, if I spent half a mortgage payment on one bag, I’d damn well better use it. So I did. I used it for diapers, of course, and wipes and snacks and toys and the like, but also for my camera and for my laptop. Diaper bags, as you know if you’ve every used one, come really well-padded and are virtually indestructible, which are exactly the qualities that you want in a gear bag as well. And seeing as most gear bags aren’t as pretty as some contemporary – pricey – diaper bags, well, might as well go for the diaper bag. My friend and fellow Intel advisor Shalini does this too, because it just makes sense (great minds, etc, etc.)

I continued using the diaper bag long after Emilia was out of diapers, and would still be using it (Jasper is still in diapers – don’t get me started on that one – so the diaper-holding functionality is not irrelevant) if it weren’t for my Epiphanie bag. My Epiphanie bag is everything that my diaper bag was, and so much more. Also, it’s not a diaper bag. 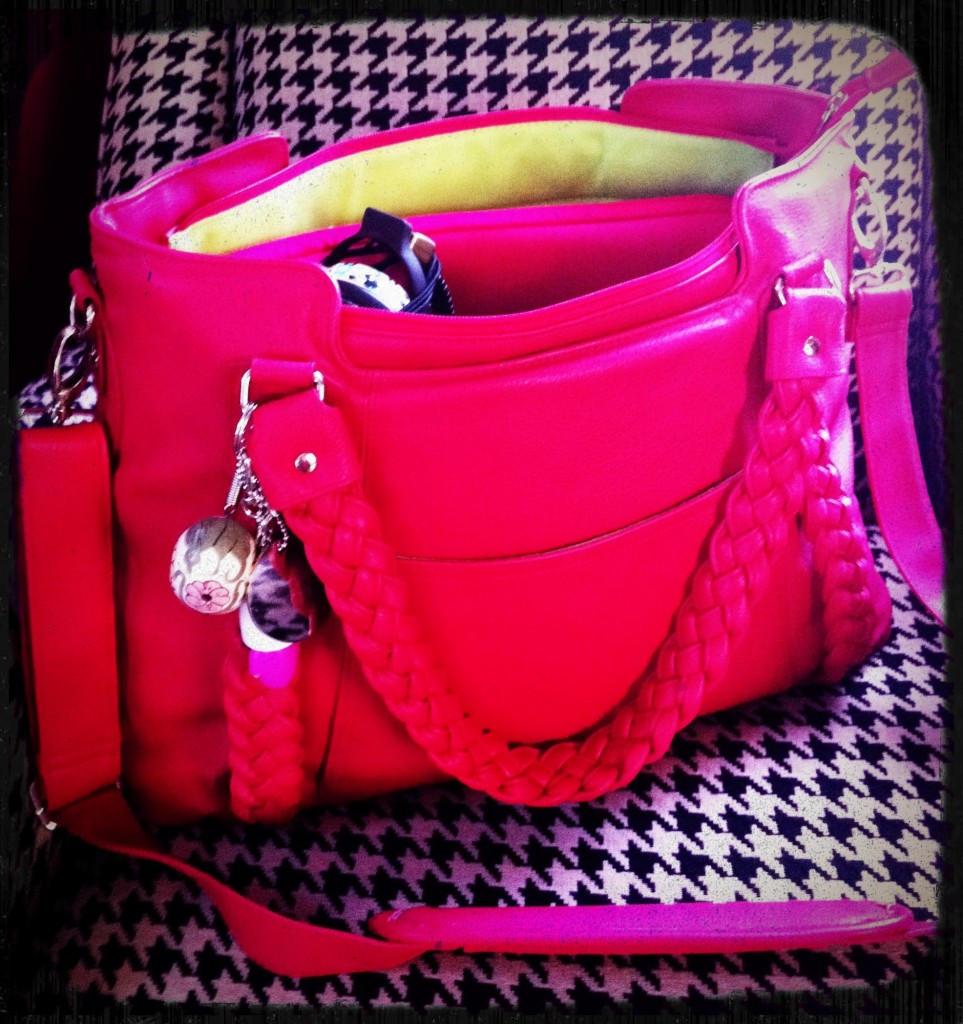 I’ve written about how awesome is my Epiphanie bag before; that, and if you’ve ever seen me at a conference toting it around, you’ve almost certainly approached me to admire it and been rewarded by a long speech about how amazing and life-changing and did I say amazing? it is. So I won’t tell you again.

I’ll just show you what’s inside: 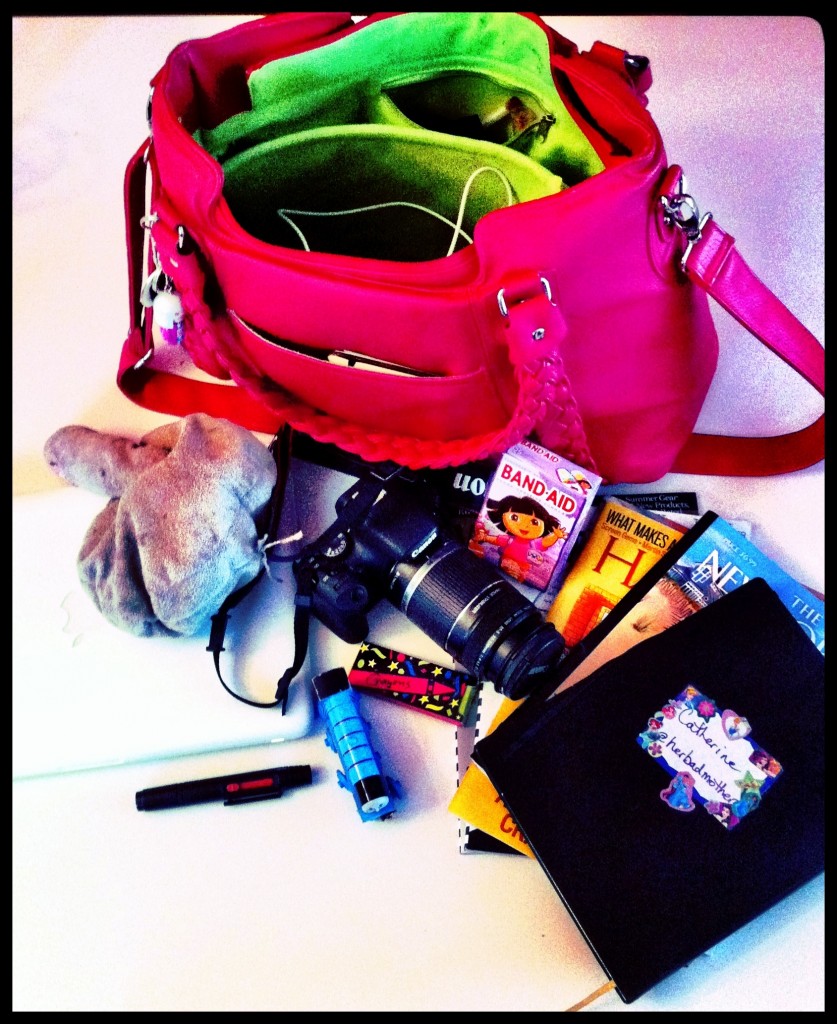 Clockwise, from the left (excluding the big pink wonder of a bag):

3.) My husband’s Canon (I’m testing it for him, you guys. OUT OF LOVE. Plus, my Nikon battery needed charging a whole six days ago and I just haven’t gotten around to putting it back in my bag because oooh, Canon, pretty!)

Not shown: a handful of cosmetics shoved into an internal pocket (lipgloss, compact, more lipgloss); a tangle of wires and peripherals; my iPhone (what do you think I took the picture with?); my Android (US-based, with a US number, y’all); random bits of paper; one diaper shoved in the back external pocket; more crayons.

I’ve also carried a netbook in there, in addition to the MacBook, just because I can, and I might have also had a flask in there once. I think that the contents of one’s bag can tell a lot about someone; mine, I think, says that I’m a literate and gear-obsessed multi-tasker who likes pink, crayons, and trains, and who lets her daughter play with a phallic plushy. Which sounds about right.

What does your bag say about you? Do you have a gear bag-slash-diaper bag, or a diaper bag-slash-gear bag, or something else entirely? My friend Shalini rocks the diaper bag, as I said above, and she spilled the contents for all to see over at her blog – go have a look. The spill the contents of your bag here, or in your own space (let me know if you do so that I can come see!) or join the discussion at the Intel Canada page on Facebook, where all the techie guys with their drab techie bags totally don’t know what they’re missing. 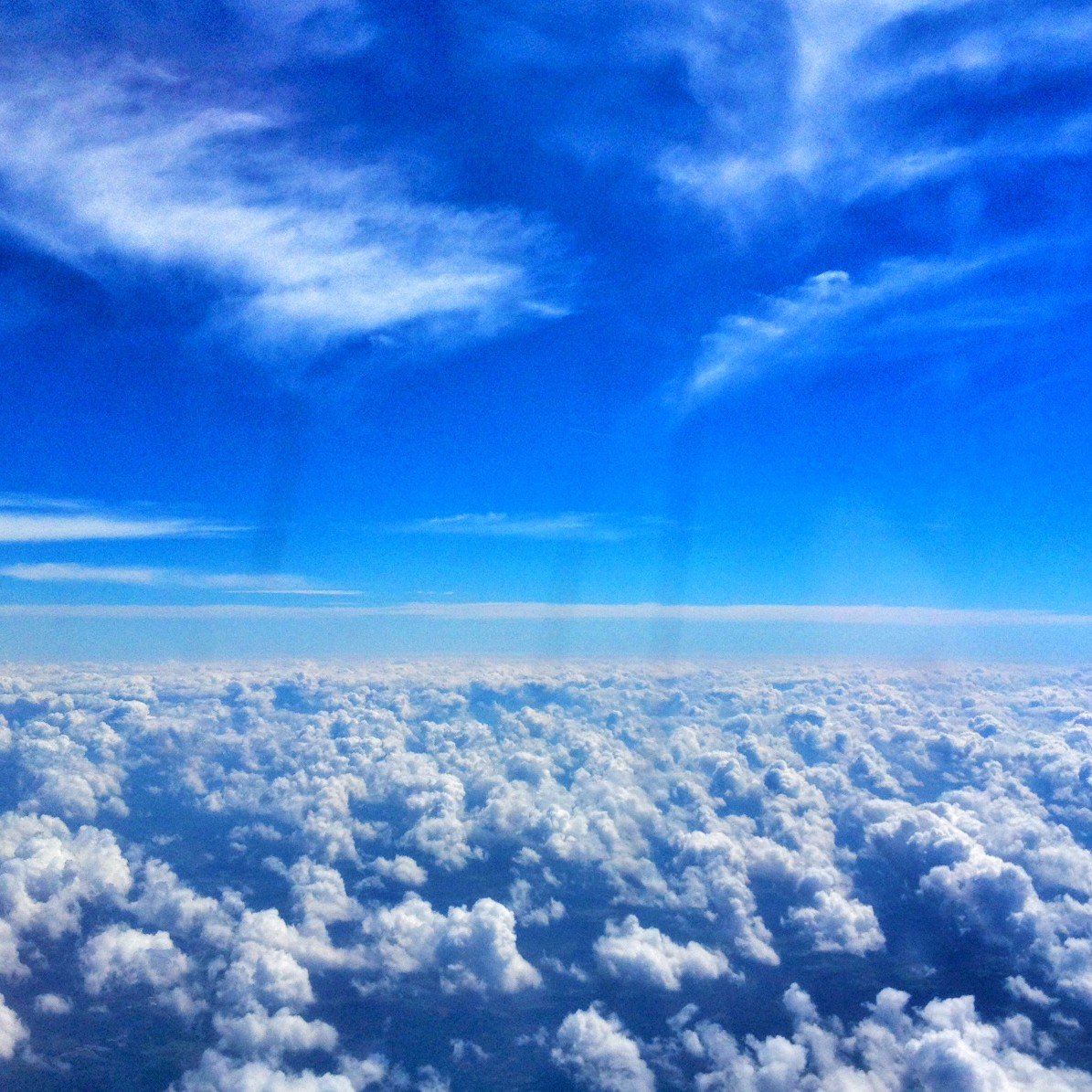