A Room Of Her Own, Mostly

To say that we’re all pretty excited about moving to New York would be an understatement. If excitement could be measured on some sort of excitementometer, the levels in our household might cause it burst. Our household thrums with excitement. Even though we’re tripping over cardboard boxes and dealing with epic chaos and wrestling with my increasingly frequent and lengthy absences (I’m more or less resident in NYC now), we’re happy. This is an adventure. This is exciting.

That excitement, however, is not evenly distributed among everyone within the household. I’m super-excited, of course. My husband is ambivalently excited (it’s a thrilling move, but it also involves a lot of changes, and a lot of work, and does he have to give up his car, really?) Jasper is excited but doesn’t quite understand what he’s excited about. The cats are decidedly unexcited, in that decidedly unexcited way that only cats can really effect. Emilia is more excited than anyone. Emilia’s excitement throws off the entire scale of excitement in our house, because she’s excited enough for all of us, including the cats, and then some. We’re moving to the place where the Lady Statue (Statue of Liberty) is! We’re moving to the city of Curious George and Sesame Street and Annie (the movie convinced her, for better or for worse, that New York City is a place where people spontaneously burst into song and dance routines and that orphanages are kind of awesome.) We’re moving to a building with an elevator!

There are only two things that temper her excitement somewhat. One is the mild anxiety over the fact that she does not know who her friends will be. This is a very mild anxiety, however, and we’ve been been addressing it by discussing every night before she goes to sleep the amazing and exciting fact that there is a whole big city full of new friends to meet. The other is a slightly more pronounced anxiety over where is all of her stuff going to go? What will her room look like? Where will she put her favorite things? She will need to unpack her suitcase, you know (her suitcase, by the way, has been packed for about two months.) Where is Jasper’s train table going to go? Where will Toady and Teddy hang out? She has questions, and these questions and the heretofore unsatisfying answers to these questions (we’ll figure it out when we get there, sweetie) are causing her concern. But we’ve been addressing this concern. We’ve been addressing this concern with the help of IKEA.

We’ve been addressing this concern by involving her in the planning of her new room, and we’ve done this with the help of the IKEA catalogue, the IKEA Share Space, a visit to IKEA and a meal of Swedish meatballs with lingonberry sauce. She looks at pictures and I print out or tear out the ones that she likes, and then we talk about how the various things would go together and then we consult with Toady and Teddy – it will be their room too, you know – and then we do not consult with Jasper – it will also be his room, but ‘he just likes what I like, Mommy, and also his trains‘ – and then we go – we went, just the other week – to IKEA, which is, like, the mothership for kids who are designing their own rooms and playspaces and who also and not incidentally like Swedish meatballs.

And here’s what we came up with: 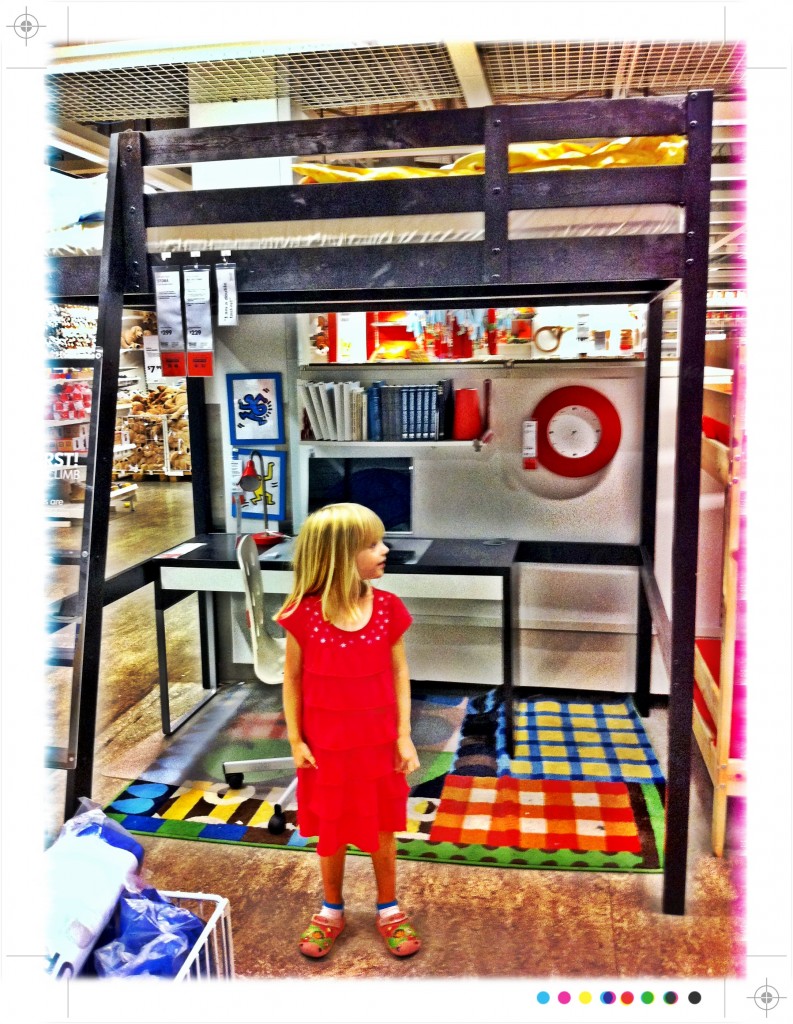 It’s a loft bed, because we’re moving to a loft. I’m not actually sure that it will fit in their bedroom space – height-wise, it’s fine, but it lacks a sleep space for Jasper, which means that we’d have to add a single bed somewhere, and where that somewhere is, I don’t know – so we may go with the NORDDAL bunkbed, which Emilia also approves. 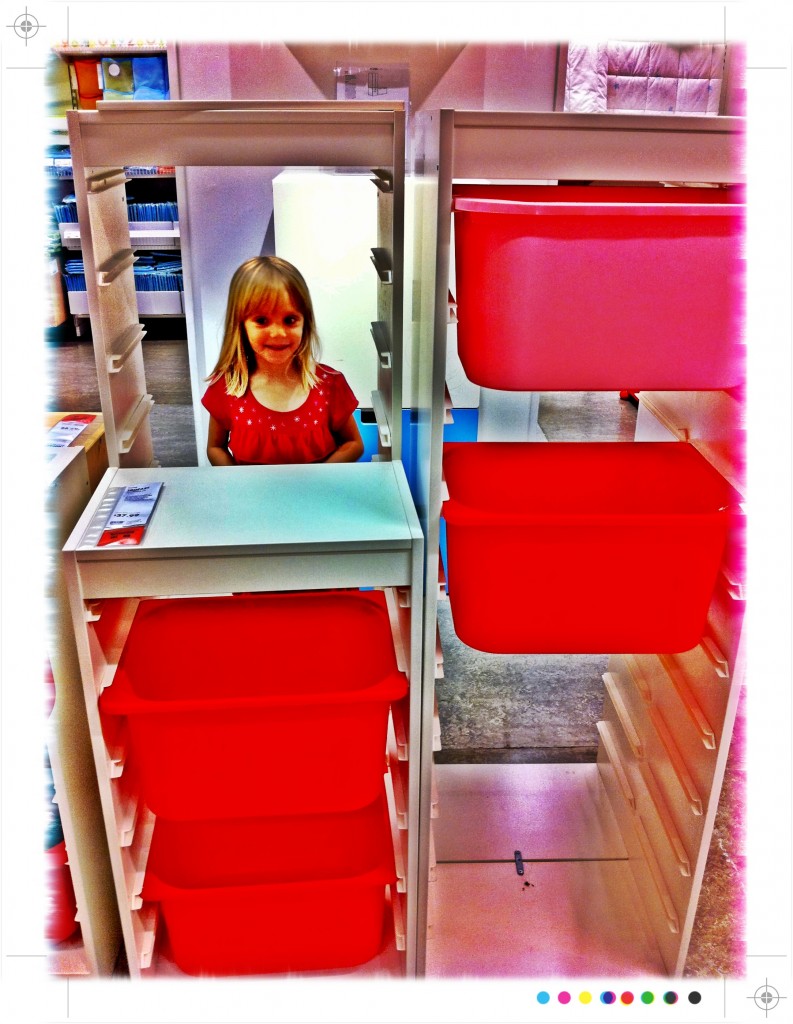 Bins for clothes and toys, especially the TROFAST ones. Because bins are cooler than drawers. Drawers are for boring people, according to Emilia, who has insight into the human spirit that far exceeds her five years. 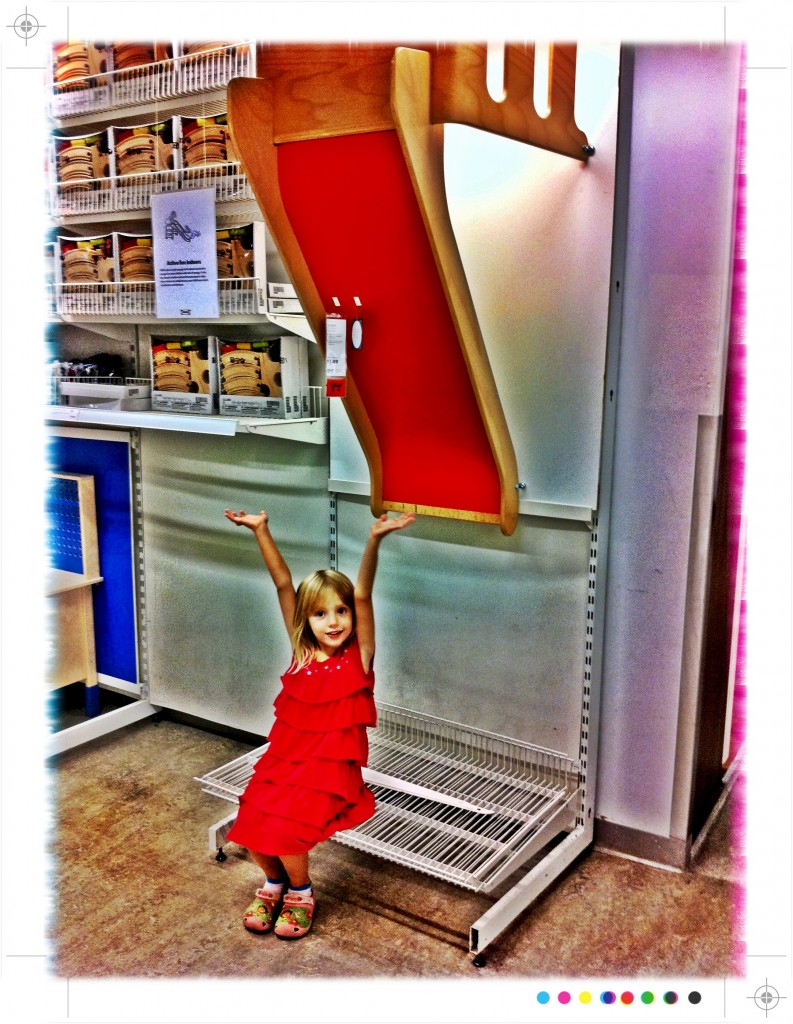 Play structures as furniture. IKEA understands children almost inconveniently well. Why have a chair in your room when you can have a slide? Seriously. (I’m undecided about the slide. Isn’t the whole city of New York a playground? Do we need a playground in the house? Emilia insists that, yes, we do, ‘because the funnest rooms are the ones that you can play in, Mommy,’ which, fair enough, but still. We’ll have to see on this one.

Emilia’s anxieties about the move have diminished somewhat, now that she has some idea of where she will put her stuff and where she will sleep and whether she will, in fact, live in a playground. So the balance of excitement/anxiety has shifted, such that the excitement level has been boosted by a factor of eleventy thousand. Which is to say, she’s bouncing off the walls. She can’t wait.

(The next chapter: translating her choices into our new space, a loft in Brooklyn. Stay tuned!)

(Emilia’s new bedroom design has been sponsored by IKEA Share Space, which is a space made by and for people like you, and also Emilia. You don’t have to be an interior designer – or a five year old with strong opinions about slides as furniture – just a lover of design. As IKEA says, ‘it’s a place where you can admire rooms you like and save them. You can even select IKEA products to save to your wishlist. Get started by adding your own home, or just take a look through others. So come back as often as you’d like to inspire and be inspired!’

And then come back here and see how Emilia’s room turns out. And what our new place is like, and whether we do end up getting that slide.)

Home Is Where The Bunkbed Is