All bullying is horrible, of course. I’m resisting the temptation to insist that the bullying of Tanner, who is disabled and terminally ill, is horrible by a whole different order of magnitude than ‘ordinary’ bullying, but the fact of the matter is that to the bullied child, and those who love that child, there is no such thing as ‘ordinary’ bullying. All experiences of being bullied are uniquely, exquisitely horrible.

So it is that our experience of Tanner being bullied, and certainly Tanner’s experience of being bullied, feels uniquely awful and terrible and painful. That he already faces so much disadvantage, that his life is already painful and difficult, that his life will be short makes it all feel like something of a curse. This is how I feel. This is how my sister feels. This is, of course, how Tanner feels, although it must be said that I lack the words to understand or explain how Tanner feels, because I cannot for one instant imagine how Tanner feels, beyond a vague understanding that it involves an order of torment that I have never and likely will never experience.

What’s been happening, in my sister’s words:

Tanner over the past month or so has become colder somehow…yells a lot, says mean things to Sophie, me…and says some pretty upsetting things about himself, his disability, dying… I couldn’t figure it out. He’s never like that. Then he mentioned in casual conversation something about bullies. So I started asking him more pointedly about it… he didn’t want to talk about until just the other day, he finally told me a name and what has been happening to him. It’s a kid in his class. He tells Tanner he is fat and stupid and ugly, nobody likes or cares about him and that he was going to push him onto the road in his wheelchair… gets a couple other boys involved… they taunt him… but Tanner won’t say much else…

That is why he was so shy with the news crew (Tanner is on a Dreamlift trip to Disneyland, and local media interviewed him) – he said kids were just going to make fun of him. They wanted to film him drawing, to share some of his art so they could show the community who the real Tanner is, but Tanner didn’t want to. He is not the boy who was interviewed in NYC. He could barely manage to force a smile.

Chrissie has been fearing this for a long time. You’d think, maybe, that it would be an unreasonable fear – who bullies disabled kids, terminally ill kids? Is that not monstrous? Who does that? – but she knew. She knew.

When Tanner took his first Wish Trip to Disney World – it seems a life time ago….back when he was still walking, running even…before the Duchenne really took hold of his muscles…back when he was “normal” – we stayed at Give Kids the World, a wondrous place dedicated and devoted to sick children and their families, and we met a little girl. This girl of 8 had been badly badly burned, and left with horrendous disfiguring physical scars. I’ll call her Tessa. Tessa’s Mom and I chatted over breakfast as my kids, and others, peeled around the place, laughing. There kids in chairs, kids with no hair from the ravages of chemo… little ones, big ones… all shape sizes colors. Her mom stopped talking suddenly, and burst into tears watching Tessa run around, unselfconsciously, laughing with other kids. You see, those kids saw Tessa, saw her soul, not the burns. Her mom said that most of the time people gasp at the sight of Tessa… and cannot see past the scars… treat her somehow less than human. And so she is shy and tries to hide herself. And then I started to cry….because of the joy I could see on her face, watching her little girl just be. Her scars were invisible to the families, the children, the volunteers there. She was just a beautiful little girl who liked cotton candy! And I cried because fear set in my heart too, as Tessa’s mom was afraid, afraid of not being able to shelter her baby from some of the badness of life, the ugliness of people. She was afraid of not being able to protect Tessa’s heart from hurting when kids taunt her, or – worse, sometimes – ignore her. And I became afraid, and I stayed afraid.

Tanner has been through the experience of being ignored. Tanner’s been through the experience of being teased. Tanner has had few playdates. He’s never been invited to a birthday party. He’s been an outsider for most of his short life, and now he’s being pushed even further outside and it is horrible horrible horrible because he deserves so much joy in the time that he has. He has so much pain already. He deserves joy. He deserves joy. I want to grab God by his dusty lapels and demand that he explain why he cannot let Tanner have even this. I want to know why it is that there are bullies, that there are monsters, that are there are bad, bad people among us. I want to know how this happens.

There is nothing right or okay about bullying, ever. Anyone, regardless of age or abilities or appearance. Period. Parents need to stop and think and talk to their children. What if it was you? How would you feel? It is NOT okay to intentionally inflict hurt on another. All children deserve to be happy and free, children like Tanner in particular need all of the happiness and freedom they can get. Thank you to all of the wonderful wonderful people who DO make a difference in their lives and others (you know who you are) – one day, one week, one moment of happiness in its purest form (thank you Disney) brings joy to them, and to their families too. To see a genuine smile. Those of you who pick on others, ever, in even the smallest ways, and let your children see you do it, so that they learn to do it, a virtual middle finger to you, because I can’t find an emoticon to illustrate it.

Right. That. Fuck bullies, in all their forms.

Chrissie is meeting with Tanner’s school today. It already isn’t looking good, because Tanner’s teacher, and the mother of the child who is bullying (who works at the school), have defended the bully, suggesting that Tanner has provoked him, which, seriously? Tanner can barely FUCKING SWALLOW. He is in a wheelchair. He is dying.

I want to fly out there and throttle somebody, which is horrible, because, like Chrissie, I want the grace to rise above the anger that I feel. But right now, I don’t how to find it. I just don’t know how. 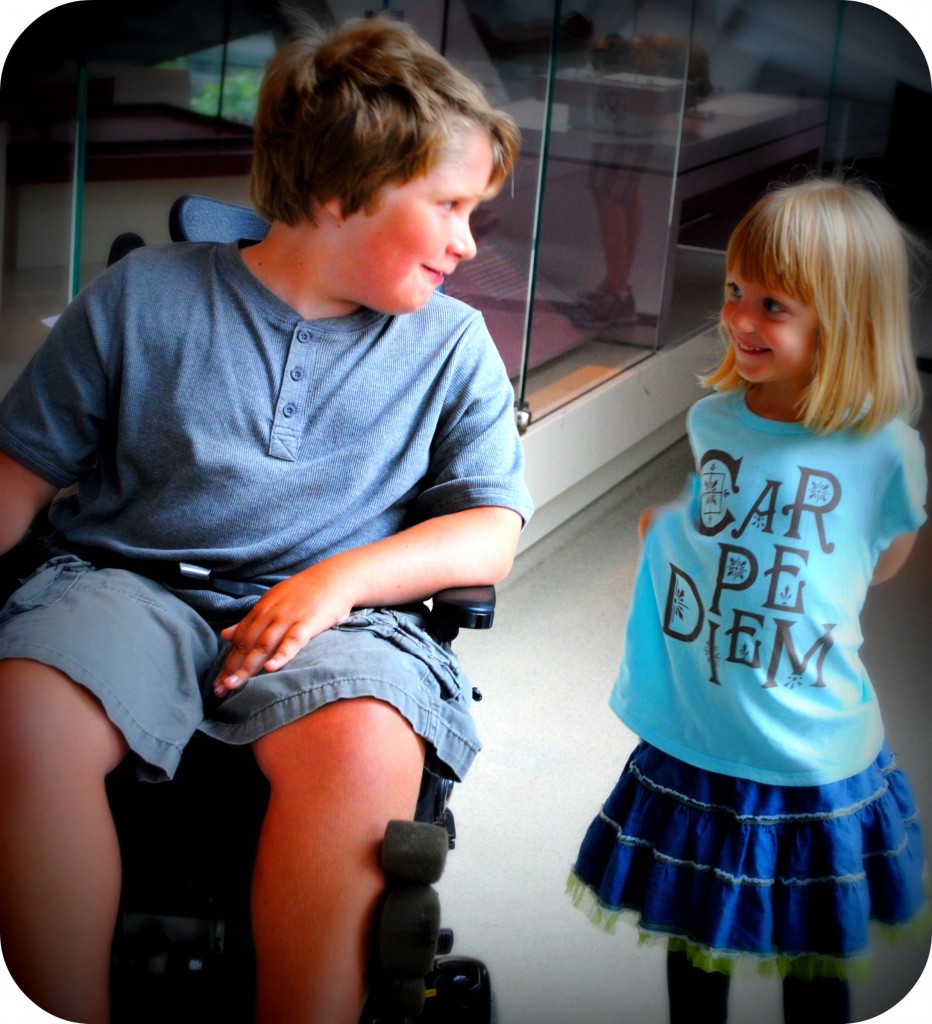 Why can we not all live in love, or, at least, live in a world that rejects hate? Why is this too much to ask?