In honor of International Women’s Day, this: a repurposing of an essay that I wrote for Canadian Family a couple of years ago, about my ambitions and frustrations in living up to my own self-assigned feminist mother bona fides. I still struggle with these questions, somewhat. Inasmuch as I don’t struggle anymore it’s because she’s defeated me. She’s my own wild horse (unstolen), and she throws me regularly. I’m mostly happy about that.

When I was 11 years old, I stole a horse. Actually, it’s probably more accurate to say that I borrowed the horse — I had every intention of returning it — but still: I took a horse that did not belong to me. There are laws against that. I stole the horse because I wanted to ride the horse. That I had no saddle or bridle or harness nor any real skill at riding was of as little concern to me as the fact that the horse was not mine to ride. I wanted to ride, and ride I did. I got on that horse and jabbed my heels into his flanks and we sped forward, through the paddock gate and out into the hayfield where we galloped for two or three breathtaking minutes until he bucked and tossed me to the ground. It was exhilarating. I had broken at least two laws — theft and trespassing — and had very nearly broken my neck, but all I could think was: when can I do this again?

My daughter, who is 6 going on 26, has a knack for turning every activity into a hair-raising, knuckle-whitening exercise in full-throttle adventure. Trees are for climbing, fences are for scaling and stair banisters are for sliding. Beds cannot be slept in until they have been bounced into submission, and kitchen stools are for facilitating raids on the cookie cupboard. I’m pretty certain – no, I’m entirely certain – that if there were horses anywhere near our home, she’d have already figured out how to steal one. She’d return it, I’m sure, but she’d ride the hell out of it before she did. 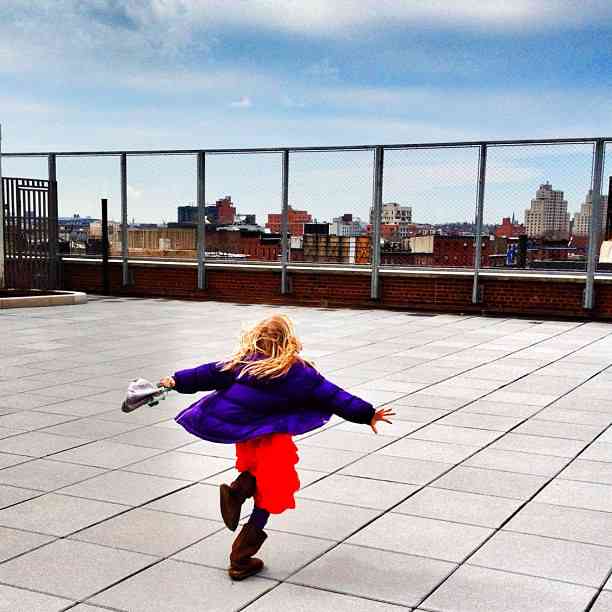 Her zeal for life is both awesome and terrifying to behold. It is awesome, because her confidence and her adventurousness hold every promise for a future of limitless possibility: my daughter, if she continues on this spirited path, will grow up expecting that she can and should pursue any ambition and that she will not and should not be held back by anything other than her own will and ability. But it is terrifying for exactly the same reasons: her confidence and her adventurousness may lead her to regard the world with all its fences, locked cupboards and laws of gravity as something to be conquered, and I’m not sure that “conquering” is the best pastime for a first grader.

So I’m torn. I’m torn between the impulse to rein her in, and the desire to let her run a little bit wild. I want her to understand and appreciate rules and boundaries, but I also want her to be the sort of girl who will not hesitate to push them. Which is the source of the problem, really: I want her to push boundaries, but I don’t want her to push all boundaries. I want my daughter to be rebellious, but within reasonable and socially sanctioned limits. I want her to grow up understanding that it is good and sometimes even necessary to challenge rules, but as a mother trying to manage a busy household, I often wish that she would just step in line and do as I say, no questions asked. And so I worry about the contradictions here. I want her to be her own girl. I want her to be a dream-chaser and a mountain-scaler and a rule-breaker and, yes, a horse-borrower. I don’t want to get in her way, except when I do.

I want, of course, for my children to be rebellious only in positive ways, in ways that respect the integrity of such larger-order social principles as co-operation and consideration for others and mindfulness of social norms and mores and, you know, laws. But for some reason I worry more about my daughter’s ability to do this on those terms than I do my three year old son. I simply don’t have anxieties about my boy growing into the sort of high-speed, rule-breaking adventurer that his sister is, to the extent that I’ve actually not given it much thought at all. I’ve assumed, I suppose, as he demonstrates the same levels of spiritedness as his sister, that that’s just what boys are often like. Aren’t boys supposed to steal horses? Doesn’t society, for better or for worse, expect that? Who cares if he grows up to be a rule-breaker, a maverick? That’s good, right? For boys?

Herein resides the problem: my anxieties about Emilia’s high-spiritedness are really kind of sexist. But they’re also rooted in very real concerns, I think. As a girl, my daughter faces more entrenched expectations of good behavior. She just does. I want the world and the culture to change in this regard, I really do – and I do everything that I can to contribute to that change. But those gendered expectations are still there, for now. I worry that if she can’t find the balance between being the good girl who understands that it is sometimes safest and smartest to follow the rules and expectations of social life, and the bad girl who grabs social expectations by the mane and kicks her heels in hard, she might find herself getting thrown and hurt. Again, it’s sexist of me to worry about this more for her than I do for my son, but I do. And I hate that it’s sexist of me.

But this is my battle, not hers.

Which is why I make, and make again, and again, and again, every day, this commitment to her: that I will respect her spirit, always, even when it causes me to worry. I will remember to simply be proud and encouraging of my bright, independent girl, to cheer her as she seeks out her horses and rides them until she’s thrown. And I will, in those moments, just help her pick herself up, brush herself off and whisper, go on, go ahead — do it again.

And then maybe hand her a saddle.