On Being Mom Enough — To Have The Conversation That TIME Started 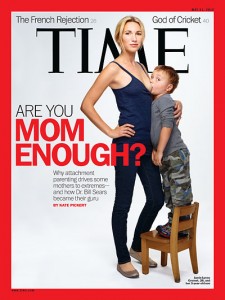 Here’s the thing: I don’t much care one way or another about the photo that appears on the cover of the upcoming issue of TIME. I mean, I have opinions about it – I have opinions about everything – but it doesn’t rile me up in any way. Nor am I provoked by the subject matter of the article at hand. It’s about attachment parenting, which is as worthy a topic for discussion as any. Sure, it’s more substantively about whether attachment parenting sets too high a bar for moms, which is somewhat provocative, but I think that that’s a worthy question. The title that appears on the cover – ‘Are You Mom Enough?’ – is probably the most provocative part of the package – I mean, it pretty much shouts the question and demands an answer, and I think that that kind of challenge, the challenge to moms to ask themselves whether they measure up, is problematic at its core – and I kind of really hated it. But even given that, I don’t know that I would change it.

I wouldn’t change it, or the photo that accompanies it, or the articles that appear inside, because these are provoking discussion. It’s a discussion that is uncomfortable at times, to be sure – how we measure the success or failure of our motherhood is a particularly sensitive pain point within our community, for obvious reasons – but the fact that it’s an uncomfortable conversation doesn’t mean that it’s not worth having. Because regardless of we feel about questions concerning judgment and measurement and how we evaluate ourselves and each other – whether we should, in fact, evaluate ourselves or each other at all – they are questions that persist. They’re there. Sometimes we talk about them, sometimes we don’t; sometimes the conversations that we have about them are public, sometimes they’re private. But whether or not they’re out in the open – on TIME magazine covers or on blogs or around kitchen tables or in hushed whispers over glasses of wine – they’re there. And they inform our motherhood, and our understanding of our motherhood, and the communities that we build around our motherhood. Ignoring them doesn’t change that.

So when I see people deploring the conversation – the cries for us all to just stop talking about it already – I recoil a little bit. Why should we stop talking about it? Because it fuels the so-called Mommy Wars? The tensions underlying those ‘wars’ are already there. Those are live wires. We should be paying attention to them. We don’t make the judgments and vulnerabilities and pain points go away by pretending that they don’t exist. Sure, there’s an argument to be made that media discussion of these things foments conflict – but whatever conflict emerges here does not emerge from nothing. It emerges from real tensions, real issues. And I’m enough of an old-school Habermasian to believe that we need a robust public discourse – an engaged, lively community conversation – about these issues if we’re to work them through. Or perhaps not work them through – and here I become less Habermasian and more Socratic – but keep them alive and apparent and part of the ongoing discourse that makes us who we are.

This is power of this space, as I’ve said here many times before: we have not just created a robust public platform for our storytelling and community building, we have transformed storytelling and community, and with our story-driven, discursive community are changing how we think and talk and engage and connect around motherhood and womanhood and family — things that were so for long marginal to public discourse. We’re not just changing the conversation, we are changing the very nature of public conversation such that it almost no longer makes sense to distinguish public conversation from private.

We are the conversation. So why are we trying to shut ourselves down? Let’s embrace this conversation – even, or perhaps especially, the parts where people say that they don’t like it or that it makes them uncomfortable or that they thing that the conversation itself hurts us – and dig into it. Let’s talk it out – or at least talk it forward. These discursive provocations are a gift, an opportunity.

Let’s seize them. Who’s with me?