The Art of Letting Go 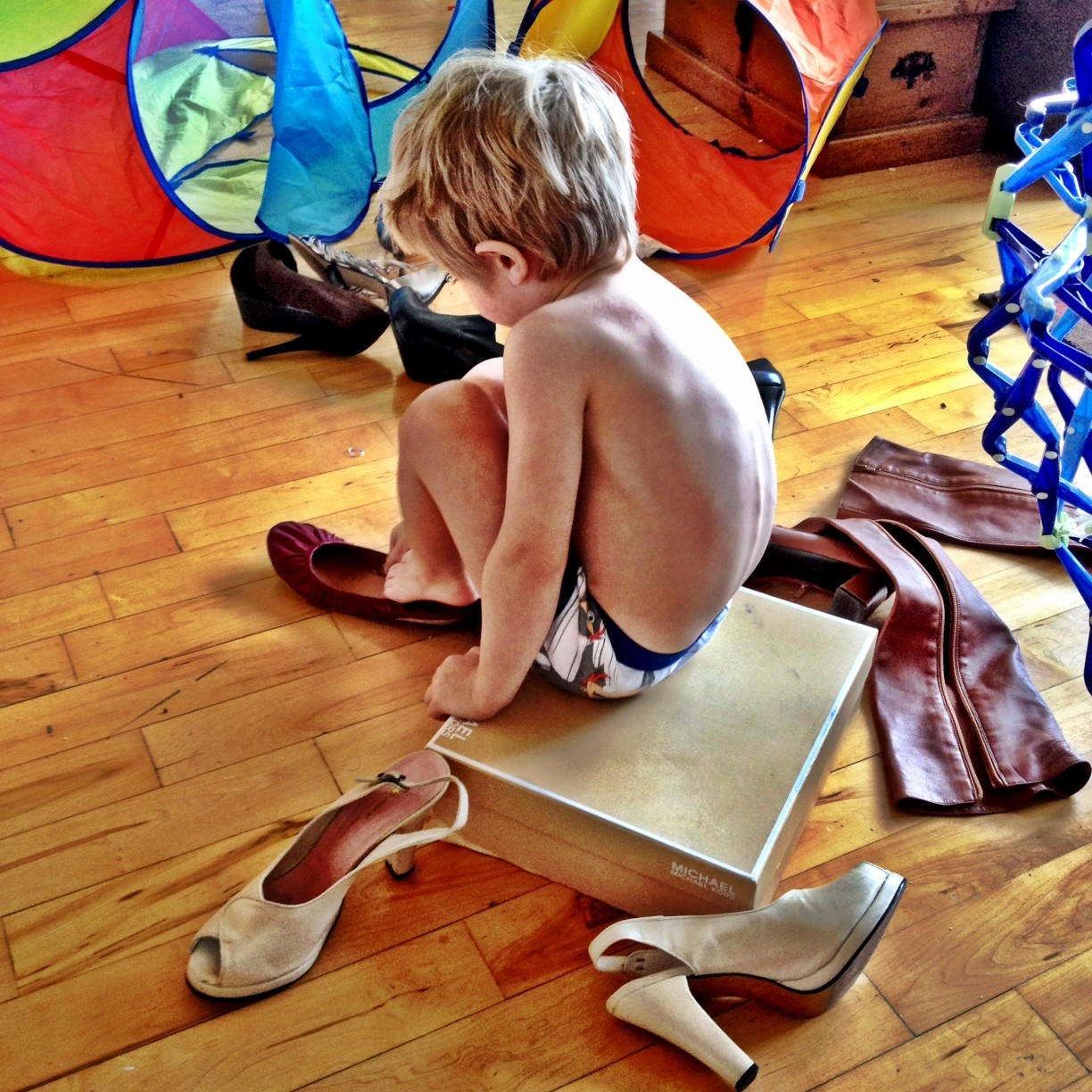 (Part II in a series on the pursuit of purpose, whole happiness, and – because we should always dream big – a better world. Read Part I here.)

The move from Toronto to New York City was a perfect opportunity for redefining – and downsizing – our lives. We were moving from a four-bedroom Georgian house with a big yard to a no-bedroom loft in Brooklyn with no yard. Everything that we had accumulated over the course of our family life thus far had to be considered and evaluated: we would have to KonMari our lives long before KonMari was a thing.

I’ve always had an ambivalent relationship with letting things go. I’ve happily moved houses, I love changing cities, I walked away from a PhD in the eleventh hour, before defending, with no regrets. But I’ve also shipped literal tons of books and papers across countries (more than once; more than one country) and I still have my diaries from high school, and more than one article of clothing from my twenties. Some things, I can blithely walk away from and never look back. Other things – not necessarily useful or valuable things – you will have to pry, as they say, from my cold dead hands.

As it happened, when we moved to the US, I didn’t have to grapple directly with the process of letting go – I was bouncing between Toronto and New York and working round the clock and just too busy to address the question of what we didn’t want. Kyle didn’t want to make those decisions – he can happily live with the clothes on his back, some tools and bits, and a credit card. So I focused on the opposite – I identified what we did want (clothes, books, furniture, dreams), and left it at that. Everything else could just be packed away. Everything else could be deferred. Everything else could just be jammed into a storage locker in suburban Toronto and ignored.

This is how you accumulate baggage. We were – I was – accumulating baggage before we even started packing. And baggage stacks up.

In hindsight, it’s so obvious how it happened. Assertive, affirmative choices are much easier than choices that require us to reject or negate. What to acquire, where to go: those are (relatively) easy decisions to tackle. Whatever choice you make, the result is additive; it’s positive, it’s forward movement. Deciding what to give up or what not to do or where not to go is much, much harder. Those decisions are all , in their way, negative; they represent doors that get or stay closed, roads that are not taken. We recoil from those choices, many of us, because they represent loss: the loss of things, and the loss of possibilities. “Giving up” implies a lot of things, none of them good; ‘”giving up” is surrender, defeat.

Deciding to move to New York was easy, because it was a positive, affirmative choice, a clear movement forward. “There’s the horizon,” the opportunity shouted, “go chase it!” Would the choice have been different if I had approached it from the other side, if I or we had asked, what will we give up? Probably not. But we might have been more intentional about what we would decide to leave behind. Really thinking about what you can or should let go of – at any point in your life, transitional or otherwise – is a powerful thing.

It’s powerful, I think, because it compels you to think of your happiness or wellbeing not in terms of material or demonstrable abundance, but in terms of intention. Figuring out what you really want, what will really bring you joy, what will really conduce to what Aristotle called eudaimonia, or wellness of spirit, requires winnowing down to what matters. It requires scraping away and discarding the things that don’t matter, or that don’t matter as much, so that you can direct yourself to what you really want. So that you can live, as best you can, with intention.

Maybe that means tossing them – those things, ideas, ambitions, desires – into storage. Maybe it means discarding them completely. I don’t know – my copy of The Life-Changing Magic of Tidying Up

(the second copy, actually, because I lost the first) is buried in a box of sweaters that I gave up sorting six months ago, so I’m not the right person to ask about what to do with your real or figurative baggage. What I do know is this: that asking the question, “what do I not want?” is powerful.

It wasn’t until I began asking myself that question in earnest that I began feeling like I was starting to really live with purpose. I finally asked myself, “do you want those things that are in front of you, or not? Do you really want that job, or not? Do you want the office and the fancy title, or do you not? Do you want status, perks, unlimited access to theme parks – or no?” and really leaned hard into the possibility of no, really worked to distinguish between nice to have and need to have and want. And my focus became sharper. By defining for myself what didn’t matter, I was better able to identify what did. I became more clear about what I was willing to give up – and what I was willing to give it up for. (Spoiler alert: the answer to those questions was no. It wasn’t as easy as it sounds – I had to ask myself those questions many times over, and I had to fight with myself to really be honest – but it was a revelation when I answered them. More on this in a later post.)

I was in a wildly privileged position, of course, in all of those moments of confronting (or not confronting) my actual and potential baggage. I had the bags to fill, after all. Being able to ask yourself, “do I want this” requires having a ‘this’ in the first place. Choices are a privilege. Which is why it’s all the more important to treat them as meaningful, no matter how insignificant they might seem – whether it’s giving up sugar or cutting back on how many gifts get exchanged on holidays or moving on from that career because it wasn’t what you really, truly wanted. We make choices meaningful, I think, when we take seriously the prospect of the negative – when we carefully consider the thing or the path or the idea that is intentionally, purposefully being given up.

This exercise in interrogating what it means to let go/give up/say no began as an examination of my own baggage, literal and figurative (why did I have it? Why did I carry it so far?), but it ended up becoming the first spoke on the wheel of what I later started thinking of as my family’s ‘whole happiness.’ What baggage were we carrying as a family? What were the choices that we weren’t making? How was I ever going to teach my kids about purposeful choice-making if we only ever asked what do we want, as a family, but not, what do we not want, and what do we not need, and what can we do just fine without, thanks?

And so it became the first question in my Whole Family Happiness audit, directed at the whole of us, and us as individuals: what do you NOT want? Starting that conversation is easy: with my kids, I’ve just asked outright – what in your lives do you really not need, when you think about it? Or that you don’t want, but still hang onto? The answers have varied – karate lessons, the current volume of toys, bad dreams, old artwork, certain friends, screens (this, shockingly, from my musical.ly-obsessed daughter – “I don’t need the app, Mommy. I DO need to create things with my friends.” Lots to unpack there.) The objective isn’t to immediately start purging – it’s just to notice. It’s just to start getting into the habit of looking at happiness as a kind of exercise of intention, a measure of quality rather than quantity. And to take choice-making seriously – what if you DID have to give things up? What if every road forked? What then?

That’s the question. It doesn’t get rid of the baggage, but it’s a damn good start.

(Here’s an exercise – do this yourself, or with your kids – just commit to giving up or getting rid of one thing. Not like Lent, where it’s a temporary indulgence of abstinence – really give something up or give something away. It can be as small and banal as just turfing that old box of receipts or that stash of hotel soaps [cough]– KonMari-lite, although I won’t tell you to thank that box of receipts or stash of soaps for their service to your life. It could be just one toy from the toybox, for the kids. Or it could be something more abstract – give up that idea you have that you’re not a good dancer or writer or whatever. Just decide that it’s not of use to you, and choose to discard it. And then go dance, and pfft to whoever’s gonna judge, because you’re not hanging onto to useless abstractions like ‘bad dancer’ anymore.

Or just recycle those soaps. You do you.) 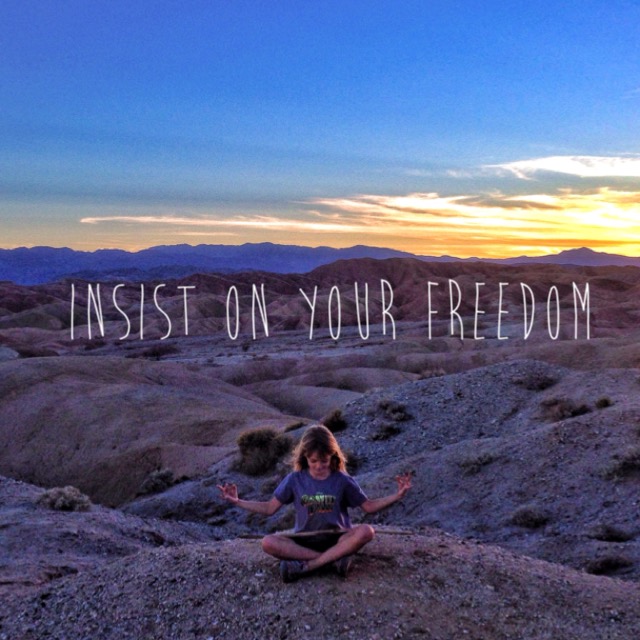 (The context on this series: this is part of a project with an organization called Social Currents. The larger idea here: considering and exploring how storytelling can nudge actual social change. Not just in the context of ‘shaping the conversation’ – although shaping the conversation is always a good thing – but in tangible, practicable ways. Can a story ‘nudge’ someone to more than just reflection on an idea – can it nudge them to some sort of action, direct or indirect? I’ve long taken it for granted that stories are the engines of change – but I’d never really pushed myself on that assumption. Have my own stories driven my own change – or have they just been reflections? How does my storytelling change when I want it to drive toward action – my own, and others? How do we use the medium to go beyond the message? If you’re interested in exploring this with me – email me at herbadmother at gmail. I’d love to hear from you.)

The Pursuit of Happiness (A Story in Parts)

Songs Of Innocence And Experience, Redux