This is probably the last (intrauterine) picture of my boy: 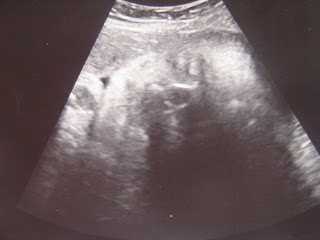 It’s not the best picture, not least because he’s a bit squished up in there and he wouldn’t hold still and so what might otherwise be a sweet sideways view of his wee face turned out to be a sweet sideways view of a wee face with two noses and four eyes. Which, you know, wouldn’t stop us from loving him with all our hearts, but still. It doesn’t matter, though, two eyes or four: it’s a picture. It’s him.

This picture was taken two days ago, when I was 36 weeks and 4 days pregnant. His estimated weight, at time of picture taking?

With over three weeks to go until my supposed due date, he weighs 7 lbs and 12 oz. And he’s been trying to punch and kick his way out for days now. No wonder my body has started advanced labor training already: I just might be facing childbirth on a par with the Battle of Thermopylae, where my nether regions are the pass at Thermopylae and this child is the Persians.

Whether I end up like Leonidas remains to be seen. At this point, I’m already conquered, so it doesn’t really matter, does it? Take the pass, my fetal Xerxes, and just try not to break anything, please.

Love Is A Many-Splendored And Sort Of Exhausting Thing

The Sound Of Crazy