The Science Of Sleep

I think that I’ve said it here before, but I’ll say it again: I’m exhausted. I’m going to say more about it right now, so if the topic of my slow spiral into sleep-deprived madness bores you, click away now.

When Emilia was a baby, I was pretty certain that I had the night-time sleep thing figured out. She refused, for the most part, to nap during the day, but was sleeping through the night from infancy and so I counted myself lucky. More than lucky: I was smart. I knew what I was doing, if only in this one area of motherhood. There were a lot of things that I couldn’t figure out (like naps, which I bitched about heartily), but getting baby to sleep at night? I knew all about that. When I spoke to other moms who couldn’t get their babies to sleep through the night, I shared my tactics – consistent bedtime routine, liberal use of loveys and binkies, a willingness to let baby fuss it out – and nodded sympathetically when they said that these tactics didn’t work for them. I nodded sympathetically, but secretly, I wondered: were they doing it wrong? They must be doing something wrong. My formula worked like magic. Of course it was because it was exactly the right formula, and not because Emilia was simply disposed to sleep at night. I wasn’t just lucky. I was doing something right.

I was wrong. I was lucky. Mostly. I mean, my tactics certainly helped – Emilia’s bedtime routine was made all the more straightforward for its consistency and its props. She did need to fuss it out sometimes, and my willingness to allow that helped us through some difficult periods. But mostly? She was, and is, a good night sleeper.

Jasper is not. And nothing that I do seems able to change that.

I’ve tried everything – routine, props, fussing it out, crying it out, nursing before sleep, not nursing before sleep, swaddling, not swaddling, vodka (for me) – and then tried it all again, and none of it has worked. Sometimes he settles easily into his crib, sometimes he will only fall asleep in his car seat, but regardless of how he falls asleep, he does not stay asleep. He wakes up, always, a couple of hours after going down, and then he will not return to sleep unless he is tucked in at the breast, in bed, with me, and then he will wake up, invariably, every two hours or so to nurse or just to grab at me and make sure that I am still there. If I sneak away to another room – as I have been doing most nights, just to remove the temptation of boob and try to extend the minutes between wakings – he still wakes up, and yells Ma-Ma-Ma-Ma-Ma until I return.

And so it goes, night after night. The husband gets up with him in the mornings, when he can, which affords me a couple of hours of rest, but beyond that there is not much to be had. I stumble forward into each day, ever more tired, ever more slow, ever more blurred and bleary and dazed. I’m coping, in a way – there are worse things, certainly, than to be exhausted from caring for a beautiful, healthy, ever-happy baby – but still: I look ahead at the days and weeks and months of Jasper’s babyhood and wonder whether I am fated to remain awake for the duration. And I wonder whether I will stay sane.

Of course I will stay sane. I’ll be fine. Millions of mothers before me have endured sleeplessness. Many, indeed, have done it without the advantages of helpful husbands and king-sized beds and spare rooms and Ativan prescriptions. So I resist the urge to proclaim myself overwhelmed unto defeat. If my own mother could do it, so can I.

What I am having more trouble overcoming: the nagging worry that I am not just unlucky, that I am, in fact – against all evidence to the contrary – doing something wrong, that I am missing some vital resource, some work of science or art or magic that would change things, that would make my baby sleep at night. I think back to the nights of Emilia’s babyhood, when I would stand outside her door and listen to her breathing and fight the urge to go in and – the mind boggles, it just boggles – wake her up to snuggle her, to have more time with her in her babyness, and I wonder whether that was a different woman, a different mother, a mother who knew things, things that I do not know, or have forgotten.

And then I wonder whether I am going crazy, and I shake the Ativan bottle to see how many pills are left and I calculate the odds of Jasper deciding to sleep through the night before they run out.

And I tell myself that I am very probably not that lucky. 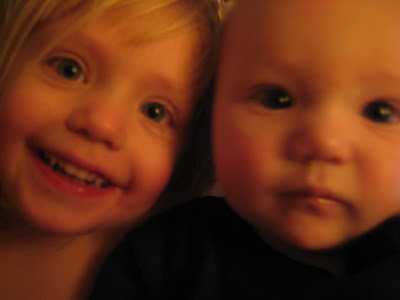 Okay, maybe I’m a little bit lucky. It’s just, you know, it’d be nice to look at them and not have them be blurry.

(I apologize – do I need to apologize? – for turning off comments so much recently. I’ve been doing it when a) I know that I need to back away from the computer – to, you know, maybe sleep a little bit – and won’t be able to read comments, and b) when I’m just posting video of the babies, because that whole thing where you give way too much thought to whether people are going leave comments saying how cute they are and ohmigod what if no-one says they’re cute? I don’t like that. So I avoid the issue altogether. Feel free to tell me that you think that this is terrible of me. Because I worry about that, too.)

A Rumination On The Half Moon (Or, Buttocks: A Photographic Love Story)