It was a mother duck and her three baby ducks, and I was pretty sure that we were going to kill them.

It wasn’t so much the impending massacre that made me scream. Nor was it the fact that the baby ducks – tiny mottled bundles of matted fluff – were so adorable. I’ve seen dead animals before. I’ve seen dead baby animals before. Hell, I’m pretty sure that I’ve eaten dead baby animals. No, it was the fact that it was a mother and her babies – that we were about to kill a mother! and her babies! – that made me scream. At the top of my lungs. With my arms flung over my head and my eyes squeezed shut.

Katie screamed too, of course. The fact that there was a giant truck bearing down on our vehicle from the right – thereby preventing Katie from swerving to avoid the Duckersons – made things worse. It was us and our children, or Mrs. Duckerson and her children. Katie chose us. Which, in retrospect, seems like the right decision. Survival of the fittest-who-are-driving-a-big-assed-SUV and all.

But it was a mother and her babies out on some misbegotten adventure, and as mothers out on their own misbegotten adventure with their own babies, the symbolism of what seemed to be their horrible end was just a little much for us to bear. And so we screamed. And kept screaming even after it became clear that somehow, miraculously, they had gone right under the vehicle and out the back end without ever even having a feather ruffled by the tires. Because, seriously, as portents go, that one was kind of confusing. Did the near-massacre mean that our moms-and-kids road-trip was doomed? Or did the averted disaster mean that we’d be fine? Were we going to get literally or figuratively shmooshed on this trip, or would angels divert the giant spinning tires of fate away from our feathers?

We didn’t know, so we just kept screaming.

The girls, of course, wanted to know why we were screaming, and our reflections on fate and God and death were a bit complicated to explain, so we narrowed it down to death, which is simpler. In theory.

There were ducks on the road, I said. And we almost killed them.

We almost killed them? And they would be dead? My daughter, always with the logic.

But why were we going to kill them?

— We weren’t trying to kill them. It was just going to happen.

But why was it just going to happen?

— Because sometimes those things just happen.

Like rocks falling out of space and killing the dinosaurs?

— Your great-grandpa wasn’t a dinosaur. Not exactly.

But did something kill him?

But why? Are we going to just die? When? WHY?

At this point, one wonders what’s really so bad about saying that God decides everything for us and for the ducks and for the dinosaurs and we don’t really know why and so could you just stop asking already? Except that such answer would itself, inevitably, provoke a but why? and there are just so many but whys that a person can take before their head explodes. Anyone who doubts that there is such a thing as death by questioning has never taken a road trip with a three year old.

The trip didn’t kill us. Whether that was because of our superlative road-tripping skills, or because God is amused enough by us to keep us around, I don’t know. It doesn’t matter. I’m not all that interested in interrogating the why of our success, other than to reflect upon the utility of jellybean bribery, Der Kommissar singalongs and the occasional in-vehicle DVD in keeping small children happy during long drives.

But it was a success, not least because it affirmed for me – at a time when I needed such affirmation, badly – that regardless of whether the road is less traveled or more traveled, it is best traveled with friends and with family and with the spirit of curiosity and adventure. And that it is, always, well worth leading your ducklings out into the world, even if it does hold speeding vehicles and spinning tires and – if my daughter is to be believed – the ever-present threat of dinosaur-and-grandpa-killing asteroids falling out of the sky. 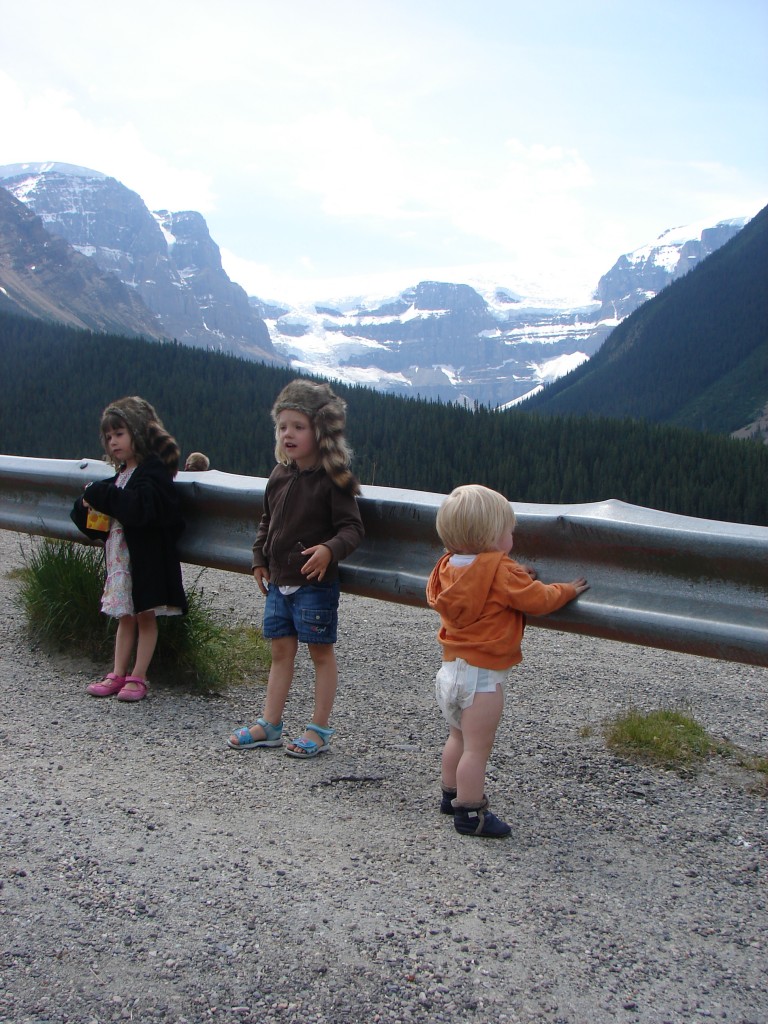 Just put one foot in front of the other, and go.

PS: If anybody out there has any advice on how to explain death to small children – or even just how to explain the difference between roadkill, extinction events and the deaths of grandparents – I would be much obliged. She is not letting this one go.