It’s My Motherhood, And I’ll Celebrate It If I Want To

When I saw the headline, I rolled my eyes. “The Case Against Having Kids.” WHATEVER. Haven’t we heard this all before? That children are overrated, that parents have superiority complexes, that motherhood is an epic social scam, that children are more environmentally destructive than SUVs and air travel and Crocs combined, that life is just that much more pleasant without the stench of diapers and the din of Barney in the background?

Like I said, I rolled my eyes. These are not new arguments. These are not particularly interesting arguments. Some people don’t like the idea of having kids, so? They should just not have kids. I actually feel quite strongly that people who really, emphatically don’t like children and/or who believe themselves incapable of caring for children should not have children. And those who do like children – or who believe that they would like their own children – and who believe themselves capable of caring for them, well, knock yourselves out. To each her own.

But some people, it seems, feel quite strongly that the case for childlessness – and by extension, the case against parenthood, which, for all intents and purposes, is actually a case against motherhood – needs to be asserted more emphatically. Why? Because according to some, parents – which is to say, mothers – get undeservedly good press. Such undeservedly good press that unassuming individuals might actually get conned into motherhood without fully understanding what they’re getting themselves into. They might actually get tricked – by, say, seeing how good Kate Gosselin has it, or by noticing that Madonna became so much more likeable after becoming a mom – into thinking that this motherhood thing is the key to feminine fulfillment and social esteem. Because, you know, moms have it so awesome. Who wouldn’t want a piece of that?

This is where I stop rolling my eyes.

Moms (and dads) do have it awesome, of course, but not in the way that the ‘Children: Just Say No’ people think. The awesome of parenthood, the reward of parenthood, is the intangible and immeasurable joy of the children themselves. It is not increased social esteem (more on that in a moment) or some abstract sense of accomplishment (other than that which is contained in the aforementioned intangible joy); it’s the kids, dammit. The kids are awesome. Everything else is pretty much really f***ing hard. Maybe not for everybody, but for most of us, most of the time, parenthood is hard. Even when it’s awesome, it’s hard. Anything that involves cleaning up so much shit is hard. Anything that puts your heart so at risk is hard. Anybody who doesn’t have at least an inkling of this going into it deserves the shock that they get.

But the ‘Children: Do Not Want’ advocates must know this, right? I mean, they don’t want children, and they don’t want children, presumably, because they’ve looked in the parenting shop window and decided that nothing inside warrants the prices charged. Or they just don’t like children, full stop, in which case any discussion about the costs and benefits of parenthood is about as relevant to them as is a debate over cheeseburgers to a vegan. So why all the whinging about what good press parenthood – again, we should just resist playing coy and call it: motherhood – gets, and all the hard-selling on rejecting parenthood? Well, apparently, any positive attention paid to mothers, any social legitimation of motherhood, amounts to a delegitimation of the choice to not have children. Which is, apparently bad. Because this is a feminist issue, ladies: beware those who would praise motherhood, who would indoctrinate you into the cult of motherhood, for they would drag you back to the dark ages and shackle you to the hearth and force you to reproduce and bake bread until you die.

This, obviously, is where I call foul.

I call foul because a) motherhood is not, contrary to all appearances as represented on the covers of parenting magazines, revered in our society. It’s not, full stop. And b) even if it were, such a thing would not be bad for women. Any women. Yes, even women who choose not to reproduce.

To the first point: say what you want about ideals of motherhood and reverence for motherhood in the abstract – doesn’t everyone coo at pregnant women? don’t we all squee at the sight of mothers doting upon children? isn’t there a whole DAY for talking about how awesome mothers are? – that reverence, such as it is (and I would argue emphatically that it’s not as uncritical as some make it out to be), does not translate into social practice. Sure, we nod approvingly at Angelina when we see her and her brood on the cover of a magazine, but when was the last time you saw anyone nod approvingly at a mother dragging a gaggle of children behind her in real life? Never, that’s when. You try taking babies or small children on a airplane, on the bus, into a restaurant, to a shop, through a park (and let’s not get started on nursing those children) – anywhere, basically, that isn’t clearly marked CHILD LEASH-FREE ZONE – and see how many approving nods you get. ZERO, that’s how many. Not that you’d notice any approving nods, anyway, what with being all distracted by the stink-eyes and the grumbling and all. Public mothering doesn’t get a hell of a lot of social support, except from other parents. Most people would prefer that we keep our mothering private, just like they did in the good old days, when children were rarely seen and never heard and mothers kept quiet about nasty things like diapers and depression and Dora. (Is there an exception for representations of motherhood among celebrities? No. For every celebrity who gets what one critic calls the ‘motherhood whitewash,’ there are dozens of others who get their every maternal move scrutinized and deconstructed and held up as examples of their moral failing. Kate Gosselin, anyone?) Mothers, revered? Mothers, above critique? In what world does that occur? Because, seriously, I want to go to there.

To the second point: we would all –  women especially – be much better off if the art and craft and science and discipline of motherhood were better respected. Motherhood is women’s work. It’s the ultimate women’s work. Call me out for being a biological determinist, I don’t care: motherhood, in its barest biological outlines, is the only work that women do that only women can do. Making babies, nursing babies: it’s what we’re built for. Many of us don’t want to do what we’re built for, and that’s fine – but it doesn’t change the fact that women are built to birth and nurture children. To be mothers. Of course there is much, much more to motherhood than birthin’ babies – much that has little or nothing to do with pushing a miniature person through one’s parts – and so it would, in some respects, be fairer to talk about parenthood and to remove any elements of gender determinism from the discussion. But the fact of the matter is that when we talk about parenthood, we’re usually talking to or about mothers, and mothers – regardless of whether they birthed or adopted or foster – the people doing the work of motherhood – are usually women. So in disparaging motherhood you disparage women, full stop. And why disparage motherhood? Because it is so essentially feminine in so many respects? Is there something essentially problematic about anything essentially feminine (whatever that means)? Or is it just that nobody can help getting all Freudian and Leave It To Beaver and Carol Brady and apron strings and squick and – have I said this already? – Freudian when they think about motherhood?

There’s no reason, no reason at all, for motherhood to be inextricably associated with 50’s-style domestic servitude. There is nothing essentially retrograde or anti-feminist about motherhood. It’s attitudes about motherhood that are retrograde and anti-feminist. And I have news for you: the most retrograde and antifeminist attitude about motherhood is the one that holds that there is something limiting and unimportant and retrograde and antifeminist about motherhood. Mothers (and fathers, although I’m not speaking for fathers here) do the most important public work that there is: they raise citizens. We don’t always do it well, and we might argue about the choices that we make in carrying out this job, but it is nonetheless our job, as parents: to raise citizens, to nurture children into better-than-functioning human beings who will contribute to society. How on earth is that something that we should worry about over-respecting? In what universe should we be worrying about valuing that work too highly? Especially when the fact of the matter is that that work is, in our society, wholly under-respected and undervalued?

Excuse me while I catch my breath. Ranting tires me, after a full day of lashing children with my apron strings and reveling in my dizzying social status.

My friend Liz wrote, earlier this week, about feeling defensive about being a mom in a culture that so often turns up its nose at moms and the work of moms and – not incidentally – the discourse of moms. She said that being defensive about being a mom just makes her want to be a better representative of motherhood, that she wants all of us to be better representatives of motherhood. Which, yes. I wholeheartedly agree. But I also wish, wholeheartedly, that we didn’t have to be so defensive, that we didn’t have to say things like oh, I’m a mom, but! I’m also a writer! Who writes about being a mom, yes, but! Also other stuff! Important stuff! That may or may not have anything to do with being a mom, but still! Important! Important! That we didn’t need to worry about whether we were representing ourselves well enough (when was the last time you heard doctors collectively wring their hands about whether they were making it clear enough to society that they were useful and important and deserving of respect?) That we didn’t feel the need to constantly defend ourselves and justify our choices, to each other and to our communities and to the world at large.

Women have fought hard for the freedom to make their own choices. I chose to be a mother, and I’m happy with that choice. More than happy, actually: making the choice to have my children is hands down one of the very best things that I’ve done in my life. I’m proud of it. I’m deservedly proud of it. And I’m sick and tired of defending it.

I’m a mother, and I think that motherhood is awesome. I think that I am awesome, in all of my baby-slinging, preschooler-wrestling, breastfeeding-promoting, yoga-pant-wearing, diaper-bag-toting, bad-mothering, mommy-blog-spinning glory. Anyone who has a problem with that can suck it. 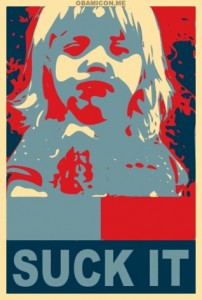