A Closer Bridge To Home 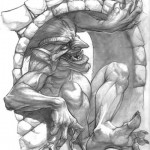 Some stories I don’t tell here. Many stories, I don’t tell here. Between the stories that I do tell there are interstices, some shallow, some deep, and in these interstice lay the stories that I do not, for one reason or another, tell. In the interstices of last summer’s stories about death and loss and more death and loss there was another story, one that I did not tell, about another loss, about the loss of – the destruction of – family, about trolls, the real kind. I didn’t tell it because it was one more hurt piled upon a tower of hurt and poking at it might have brought that tower crashing down upon my head. I didn’t tell it because I didn’t know how to make sense of it and there were other, deeper hurts requiring the attention of my confusion. But mostly, I didn’t tell it because it was not my story to tell.

It wasn’t my story to tell, even though it hurt me deeply. It took the ragged edges of my grief and yanked and tore until nothing was left but shreds, but that, that was nothing compared to what it did to my mother. It tore at her understanding of who she is and who she was and what our family was and everything that she thought it always would be. It tore her. It’s her story.

She’s telling it in her own words, in her own space. Please give her some love.