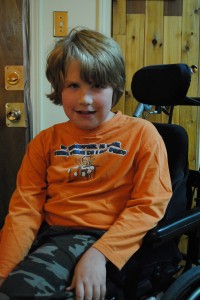 Today, Tanner goes to the doctor. This is, in itself, nothing new – Tanner sees a lot of doctors – but today, he’s seeing the doctor so that they can start fumbling toward answers to difficult questions concerning when and how and how long. How long until his food needs to blended? Until he needs to be intubated? Until he can no longer sit up on his own? Until his lungs are compromised? Until he cannot breath on his own? Until my sister can no longer look after him on her own? Until, until…

The clock ticks so much louder now. Tanner’s condition is aggressive, relentless: his muscles are breaking down quickly, and as his muscles break down, so does hope.

My sister and I have never spoken in terms of hope. There’s no cure for Duchenne’s Muscular Dystrophy, and even though research goes forward, and clinical trials are run, Tanner has never been eligible for any experimental treatments, largely because of the nature of his genetic condition (he lacks the relevant gene entirely, and most research investigates the mutation of the gene. They refer to the lack of the gene as a deletion, which I’ve always found interesting and sort of sinister, like the gene was there at some point and then was taken away, erased, as if, when God was creating Tanner, he was plugging away at the code, tapping on a keyboard, and then was overtaken by some malicious whim, and hit backspace-backspace-backspace just at the chromosomal locus of Xp21, where the dystrophin gene is created.) So we’ve never spoken of hope, beyond the general hope that whatever years Tanner had would be good years, fulfilling years. But those years are dwindling, too quickly, far more quickly than we ever imagined – most boys with DMD make it at least into their early teens, but it will be a miracle if Tanner makes it to 12 – and the quality of those years is ever-declining, as Tanner loses his ability to do the things that he loves, the things that have sustained him since he lost his mobility, things  like drawing – trains and rocket-ships and dinosaurs – and plucking at a guitar and playing Nintendo.

We don’t speak about hope.

We speak about what we can do, what we can give him, how we can fill what remains of his life with joy, and we cry as we do, because there is so much that he wants to do – to take his cousins to Disney and introduce them to his favorite characters (that he could not join them at DisneyWorld was hard for him), to take a trip on a train, to swim with dolphins, to meet an astronaut – and so little time and so few resources and, always, the terrifying prospect that, soon, we won’t even be able to give him home, because as his condition worsens the harder it is for Chrissie to look after him on her own – the harder it is to lift him, to move him, to monitor him while trying to survive as a working single mom – and the more likely it seems that he’ll have to go into care and we cannot let that happen, we cannot, but we do not have magic and we do not have fairy godmothers, we have only our hands – and our feet – and our hearts and hearts, for all their worth, cannot work miracles. I don’t think. I don’t know.

*I am still doing my 100 Miles For Tanner and I am still wearing tutus, although I am struggling against the inefficiency of it, and, yes, the seeming futility of it – there is hope to be drawn from raising awareness of DMD and helping raise money for research, but these days, for us, are dark, and hope for other boys feels – and this terrible, terrible I know – like such small consolation. But it is, still, hope – and raising awareness in Tanner’s name is something that will provide consolation as the days get darker still – and I will continue to pursue it, and hope that you will join me. But I need to do more, and I need to figure out how to do that, and it’s going to keep me up at night – it does keep me up at night – and so bear with me if I seem a little dark and cranky – darker and crankiER – in the coming days. Virtual hugs – and for Tanner, whatever kinds of prayers or good wishes are comfortable for you – appreciated.