Rage, Rage Against The Whining Of The Child 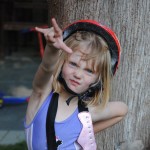 Emilia is not a morning person. I am also not a morning person, but as an adult I recognize that I don’t have any choice in the matter of whether or not I get out of bed, and also I have coffee. Emilia is a child, and she doesn’t drink coffee, so she’s oftentimes – and read ‘oftentimes’ as ‘pretty much almost always’ – cranky in the morning. I would be sympathetic about this – as I said, I’m not a morning person myself, so I get it – except that her way of coping with mornings is to whine like a banshee. A sugar-jacked freak-banshee with no off button.

Mommmmeeee! I want toast! But no butter! NO BUTTER MOMMY! NO BUTTER! And don’t make it warm! It’s TOO WARM MOMMMEEEE! IT’S TOO WARRMMMM! OOOOH! WHY DO I NEVER GET TOAST THE WAY I LIKE IT?!?

She whimpers, heartbroken by the lack of unwarm, unbuttered toast in our house. WHYYYY, MOMMY? WHYYYY? I grip the counter and resist tossing the bread in the sink and/or hollering something about starving children in Africa.

Why can’t I eat my toast with the television, Mommy? WHY? Why do I have to sit here? Where’s Daddy? I’m cold. I want socks. You said it was summer, Mommy! WHY ISN’T IT SUMMER MOMMMMY?!?! OOOOH! YOU SAID IT WAS SUMMER!

I thought you were making me not-warm toast, Mommy! MOMMY! I DON’T WANT TO SIT HERE – whimpers, sniffles – WHERE’S DADDY? WHY DOES JASPER HAVE SOCKS ON? WHY DON’T I HAVE SOCKS ON? WHYDON’TIHAVESOCKSONWHERE’SMYTOAST?!? MOMMMMEEE!

I don’t have a temper. I’m as mild-mannered as they come. There are kittens who get angrier than I do. There are kittens on Xanax that get angrier than I do. But five minutes of my four year old whining about unwarm toast and missing socks and I’m pressing my fingernails into the beds of my palms and sucking in my cheeks and willing myself to just not yell oh god don’t be the mom who yells DO NOT YELL DO NOT YELL –

EMILIA ELIZABETH ANN YOU WILL EAT YOUR TOAST YOU WILL SIT THERE WHILE YOU EAT IT I WILL GET YOUR SOCKS AFTER BREAKFAST STOP ASKING FOR YOUR FATHER *NOW*.

And then, if I’m really undercaffeinated, I stomp my foot.

And I feel ashamed. I yelled, and I became that mom. That mom who yells, for no good reason, just because the whining hurts her head and she hasn’t had enough coffee and it’s too early and where are my manservants and GOD, Husband, WILL YOU JUST GET OUT OF THE SHOWER ALREADY. And I know that when the whining starts up again, I might do it again. And then I will feel ashamed, again.

If I’m honest with myself, it’s not the yelling that unnerves and shames me. I’m raising my voice, but as I said, I’m an extremely mild-mannered person and anything more than a fractional decibel above friendly conversation feels like yelling. And I know this. I know that in the category of ‘displays of anger’ my children aren’t seeing much. It’s that I feel the anger. I feel angry at my children. Viscerally, irrationally angry. And that feeling? I hate that feeling. I am made uncomfortable by that feeling. Every fiber of my being screams out against that feeling. Not because I fear it – I mean, do fear it, in the sense that it feels so unfamiliar and foreign and wrong, but I don’t fear losing control of it, inasmuch as ‘losing control of temper,’ for me, would mean crying and stomping one foot, lightly, and then only if I was really, really pushed. No, I hate it because I am so used to not feeling it, that deeply visceral experience of anger or frustration – or, if I do feel it, pushing it almost immediately away – and because the idea of being angry, really angry, really unreasonably angry, with my children horrifies me.

I grew up in a household wherein nobody got angry, not really. Or, I should say, nobody expressed their anger. My parents would get mad, at times, but they always expressed those feelings clearly and more or less calmly and they always apologized if they raised their voices. I can remember, with perfect clarity, the only time that my dad ever yelled, really yelled, at me – I can still hear the break in his voice, the catch in his words, as clearly as if it were just moments ago; it so obviously upset him more than it did me that the memory still breaks my heart – and that was during the period of one of his breakdowns. My parents never raged, never stormed, never screamed. And they were adept at diffusing my upsets – my dad would hug me; my mom would try to make me laugh – and so I never had to confront rage, never had to tackle it and defeat it and – here’s the rub – understand it. So. It confuses me, upsets me. And I wonder whether I mightn’t have been better off if I’d been exposed to it a little more. If I’d felt it a little more.

So should I let my kids see when I’m angry? I don’t know. They’re well in touch with their tempers, and I roll with that and let them have those tempers and encourage them to express their feelings in whatever (harmless) way feels right to them. Which makes me wonder whether I need to get more comfortable with my own anger, to find ways to feel less anxious about expressing it, to accept it as part of the landscape of my emotions and let it have its place. And to recognize that when something – like, say, incessant whining – triggers it, it’s okay to let it rumble through me and even work its way down to a foot stomp or two.

Or maybe someone just needs to come up with some kind of kid-safe whine-repellent and send me a case. I don’t know. What do you think?

(And, since we’re all friends here, answer me this: I’m not the only one who sometimes gets driven batshit by the whining, right? I can’t be, right? RIGHT? How do you cope? It’s like a thousand fingernails running down a thousand blackboards with the soundtrack to Monkey ScreechFest 2000 – complete with monkey guitar feedback – blaring in the background at full volume, isn’t it? Maybe I just need earplugs.)

Motherhood: Scarier Than A Barrel Of Rabid Badgers, But Twice As Fun