When all was finally said and done, it wasn’t appearing on CNN in a tutu – nor appearing on CBC in a tutu, or posing in Central Park in a tutu, or watching as a limo slowed down on Fifth Avenue and the passenger leaned out the window and hollered – at me – hey, I saw you on TV in that tutu! – that stood out as the most memorable moment of my week last week. Which, when you think about it, is memorable in itself: I had a week in which I appeared on CNN in a tutu and that particular experience will not be recounted here because, during that particular week, stranger things happened.

I don’t even know why the prayer circle was there, in the elevator bank in a remote wing of the convention floor of the Sheraton in Times Square. I was there because I had gotten lost, and, as usually happens when I get lost, I had rushed determinedly in whatever direction seemed most promising and in this case it was toward a bank of elevators that, it turned out, was hosting a prayer circle. And my first thought was, oh. They’re blocking the elevators. My second thought was, and they’re praying.

My third thought was, and I’m wearing a tutu.

I considered, for a moment, turning back. But turning back meant trying to retrace my steps through the maze of the convention floor and I wasn’t really sure that I could manage that and I was late and I was frazzled and I was pretty sure that if I didn’t keep moving I would just collapse to the floor and cry. So what if there was a prayer circle, praying, right there? Those were the elevators that I needed.

So I walked up to the circle, holding the layers of my tutu close to my body so that I wouldn’t make too much rustling sound and disturb the prayer. This shouldn’t have been a concern, because they were praying really, really, loudly, but still. For some reason I felt as though my tutu, with all its ruffles and tulle and bounce, might represent some kind of affront to their spirituality. I edged close to a woman on the outside of the circle.

“Excuse me,” I said, in a dramatic whisper that wasn’t strictly necessary, given how loudly they were praying. “Excuse me, but I really need to take the elevator.” The woman turned to me, looked me up and down, and smiled. “I saw you on TV,” she whispered. “You’re a good woman.” Then she resumed her prayer, and, continuing to pray out loud, put her hand on my back and gently guided me forward through the crowd until I was near an elevator. Someone pressed the button, and I just waited. Everyone looked at me and – not breaking the rhythm of their prayer – smiled.

I might have cried right then, but I was distracted by the fact that I was the only one who was a) not praying, b) white, and c) wearing a tutu. I smiled back – it was, I think, what is usually described by unimaginative writers as a ‘brave smile’ – and concentrated very, very hard on willing the elevator to come. Then I noticed that their prayer had changed.

“…and Lord, give this good woman strength, and surround her in love, and take care of her nephew, and her family…”

That was when I started crying.

Last week was – notwithstanding the hurt and the drama – so full of love and support and generosity, and that love and support and generosity sustained me through the hurt and the drama and that in itself is extraordinary. But as I said in this video interview, and in many media interviews, the only thing that surprised me about that outpouring of love and support was its volume. I already knew that this community is a loving community, a generous community, an extraordinary community. It’s lovingness is one of the reasons that I’ve kept blogging through the most difficult times, why I’ve felt empowered and emboldened to share even my darkest secrets and my deepest fears in this space. Even when the trolls have come out from beneath the bridge and trampled the flowers here, I’ve kept going, because I know, I’ve always known, that this is a community of good people. And then last week happened, and I realized: this community is so much bigger than I ever imagined. This community is made up of women bloggers and parent bloggers and lifestyle bloggers and food bloggers and naked bloggers and social media rock stars and PR experts and journalists and restaurateurs and trampoline businesses and politicians and tutu-wearing preggos and friends and strangers and random passers-by in Central Park and a clutch of beautiful people praying in an elevator bank. This community is online, and off. This community is the world. 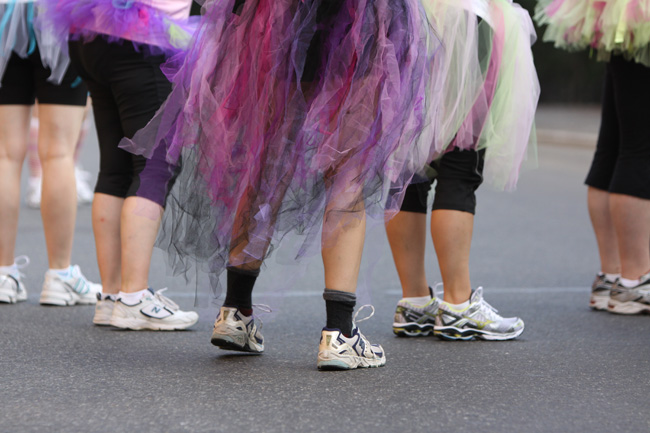 I spoke a lot with people last week about the power of social media, about how we who use social media are so empowered by this medium, and about whether this changes everything, whether this – the power of a community on the Internet – changes the world. It does, of course. This medium is powerful. We who are using this medium are powerful. But there’s more to it than that. It’s the medium – and that medium is us, our voices, magnified through the tool that is social media – and the message. We are only as powerful as the stories we tell, and our stories are only as powerful as the heart and soul that drives them, and it is when we dare to raise our voices to tell those stories, share those stories, and when we do so with all our hearts, that we connect with other hearts and voices and inspire them to join us in our story, our song, our prayer. That’s what is powerful. Social media is just – just? – the megaphone, the amplifier; we are the storytellers, we are the voices raised in a kind of narrative prayer, we are the medium, and the message, and we can change the world.

We did change the world, a little bit, last week. You did, all of you with your beautiful, powerful voices, your good hearts and your prayers.

(Because I know that it will be said – I know this, because I am thinking about it – it’s important to point out that social media doesn’t work this way for everyone. Not everyone gets their stories heard. Which is another story entirely – one that I’ve been thinking a lot about this week, and one that hurts my heart, and one that I think demands attention – one to which I will direct my own attention – but I don’t think that it negates the force of what I’ve suggested above: that when our voices are drawn together – by the pull of stories that reach right into our hearts – they do become an amazing force, and that the real power here is not just in the tool that we’re using, but in the goodness that is driving us to use it.)