Last week, Emilia went to school in a Snow White costume. She wore it with striped leggings and her hot pink skate shoes, the ones with the sparkly laces, and also a baseball cap. “I’m not really a princess, Mommy,” she informed me, “I’m just pretending to be one, because I like this dress.” Which summarizes her approach to fashion more or less perfectly: the determining factor, for Emilia, in selecting any article of clothing – shirt, pants, shoes, underpants – is simply “I just like it.” How things fit, whether or not they match, whether or not they are in season: these considerations are irrelevant. All that matters, to Emilia, is whether or not each individual item of clothing appeals to Emilia’s unique and ever-changing tastes, and whether the resulting outfit reflects to her, as she puts it, her “own self.”

This is Emilia, then, as her “own self” (Sporty Pretend Princess Edition): 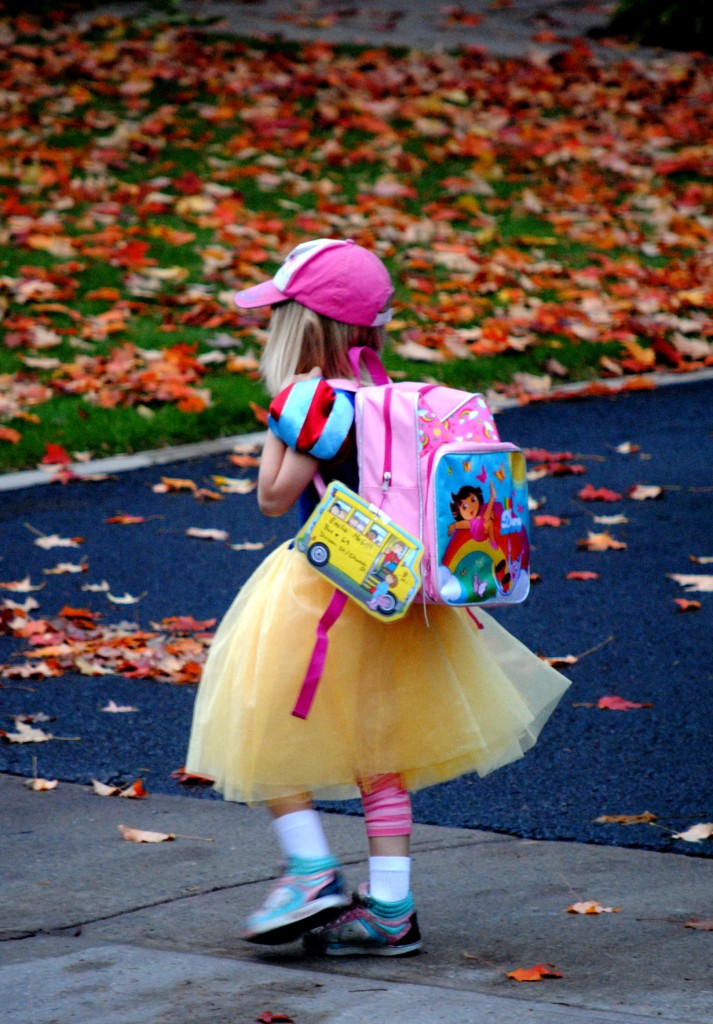 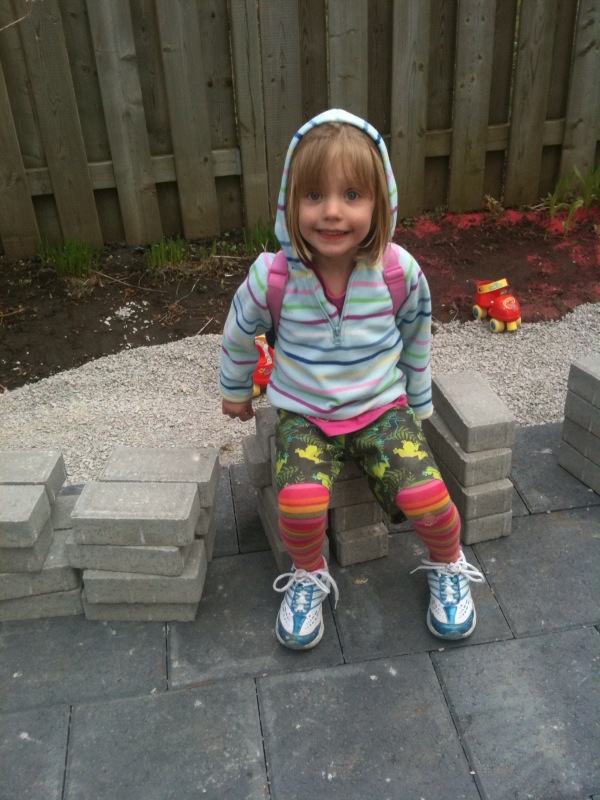 … (Today I Like Pink But Not On My Legs Edition): 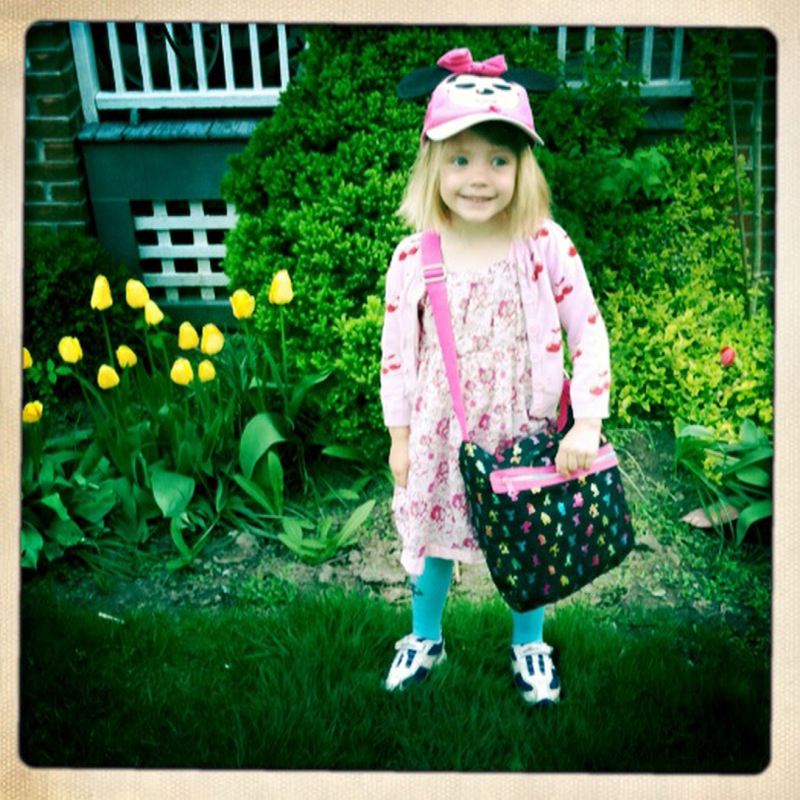 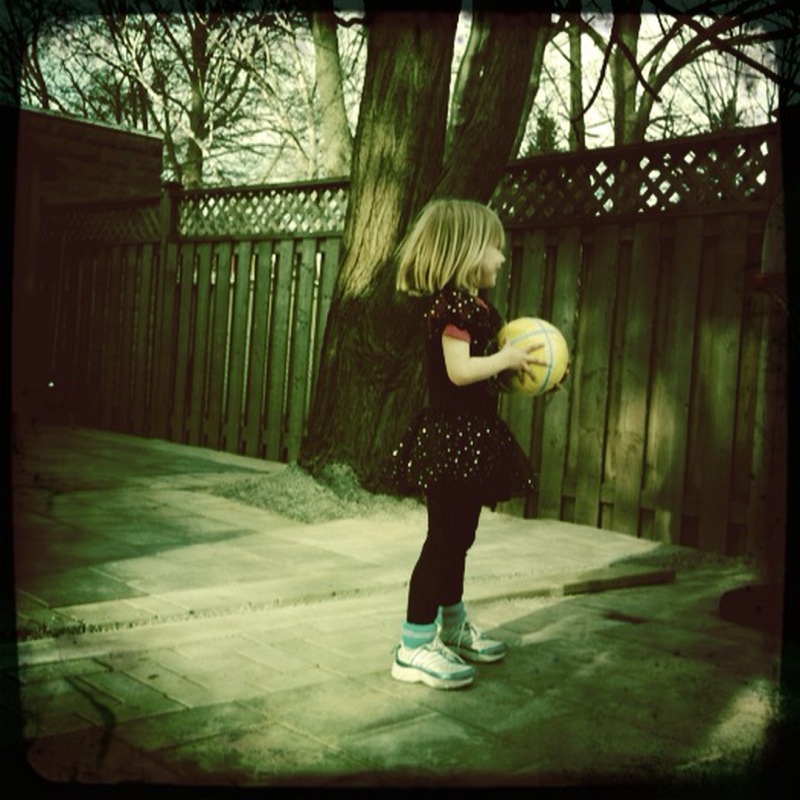 For the most part, I just let Emilia wear whatever the hell she wants to wear. I draw the line at clothes that are soiled or so ill-fitting as to be uncomfortable, and I make sure that anything she heads out the door in is weather-appropriate and (obviously) age-appropriate, and if she’s headed to school she always has a change of clothes in her bag in case she decides, for any reason, that she no longer wishes to be dressed like a skateboarding Snow White, but otherwise, she’s free to make her choices.

I give her this freedom, in part, because I am just not interested in fighting her on her clothing choices – I believe that parents must pick their battles, and this is one that I see little to no benefit in fighting – but I give it to her, too, because it brings her such joy. She loves picking out her clothes. She likes to set them out the night before – every item, from underpants to socks – and give a detailed explanation as to why each article of clothing was selected (‘I’ll wear this shirt because it’s green and I feel like it will be a green day tomorrow. And my jeans with the ladybugs because ladybugs like green leaves and my shirt is green like leaves. And my Tinkerbell underwear because fairies have wings like ladybugs. And my Spiderman shoes. Because I like Spiderman.”) Then she puts on her outfit the next day and goes about her business, happy and secure in the knowledge that she looks, as she says, “like her own self.” She’s been doing this since she figured out how to open the drawers of her dresser, which was sometime before she turned two, so she’s got this personal style thing pretty well figured out by now. It’s eccentric, and it’s her, and I, for one, am not going to get in the way of it.

Which, apparently, makes me a bad parent:

FYI, there is a difference between eccentricity and being a plain old weirdo. And kids DO know the difference. You’re not fostering imagination so much as building a chasm.

Hm, when given the choice between having the weird kid none of the other kids plays with (or whose moms turn their noses up at), or steering my child in the direction of acceptable, socially normal attire, I daresay I’d err on the side of not the outcast or freak. I applaud. Your attempts to instill a sense of adventure in your children, but at what cost? You show photos of your children’s eccentricities, and rather than thinking “oh, cute kid,” most of us are wondering how that child is going to turn out. Sure, rain jackets and knee socks are cute, but at home, not at school. Yes, the other kids and moms are judging.

To which I say: thank you! Thank you for providing me with another set of criteria for determining what kinds of moms to avoid, and for summarizing, so neatly, how parental attitudes can contribute to a culture of shaming and bullying.

John Stuart Mill argued that eccentricity – that is, the freedom of individuals to be eccentric, to express themselves eccentrically, to hold and propound eccentric ideas and to do eccentric things – was not only a hallmark of a free society, but a necessary feature of any progressive society: new ideas, after all, can only be borne from innovation and experimentation, and old ideas (or values or habits) that are not or are no longer good (however defined) can only be revealed as such when some are willing to reject the old in favor of the new, and this is the province of eccentricity. He also argued, however, that there is a tendency in the mass of any population to recoil against eccentricity – regarding expressions or demonstrations of eccentricity as ‘weird’ or ‘strange’ or ‘dangerous’ – and to actively or (more insidiously) passively discourage eccentric behavior or action or speech. Socrates, who was condemned to death for corrupting the youth of Athens with his strange ideas, is one of Mill’s favorite examples of the damned eccentric. Jesus is another.

Emilia, of course, is not emulating Socrates or Jesus when she wears a Snow White costume to school or when she pairs argyle socks with shorts and a raincoat, nor do I, as her mother, have any delusion that by allowing or encouraging her to express her whimsy sartorially I am changing the world. But I do believe that children’s whimsy should be encouraged, and not repressed, and that any child who expresses the desire to march bravely forward into the world with her heart and imagination on her sleeve, regardless of what other people might think, should be supported in that desire. I believe this, because I believe that children who are taught that difference is okay, who are encouraged to understand that looking different or sounding different or moving different are not markers of weirdness or badness, who are encouraged to freely express their own difference, who are discouraged from ‘turning up their noses’ and judging others as ‘outcasts’ or ‘freaks’ just because they are different, I believe that in those children resides our best hope for changing the world for the better.

But that’s just me. Maybe there’s an argument to be made that repressing children’s impulses to individuality and suggesting to them that any appearance of difference is rightfully judged as ‘freakish’ and that they should, like their parents, turn up their noses at such difference represents the greater contribution to their well-being and to the public good. If there is, I’d love to hear it.