So I failed utterly in my efforts to transform Emilia into a crime-fighting strawberry with royal lineage, in part because I just couldn’t figure it out (some of you had very good suggestions involving pillowcases, but, alas, we do not have red pillowcases and I did not have time to acquire red pillowcases, and also, who has red pillowcases? Don’t those imply red bedding? WHO HAS RED BEDDING?), and also in part because by the time I got home Monday evening Emilia had already decided that the quality of her costume mattered less than the speed with which she could launch herself into trick-or-treating and was having none of my suggestions about how to turn ‘Strawberry Shortcake’ into ‘Her Royal Highness, SuperBerry.’ She just wanted to get out there. Cramming her into one of my red sweaters and going at it with a Sharpie would just slow her down.

So she declared herself ‘Super Strawberry Shortcake’ and insisted that despite her lack of a cape, she was indeed a superhero. Jasper, The Cowardly Lion, was her sidekick. 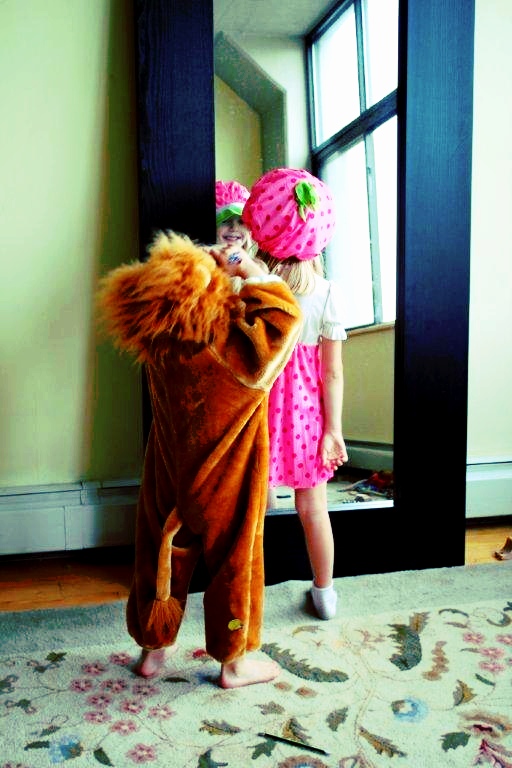 Which is great and all, but still: I felt guilty about not having been fully available to plan and execute their Halloween costumes. I still feel guilty. I know that I’m supposed to forgive myself my maternal limitations, but this working mom thing (this working away from home working mom thing) is still pretty new to me, and it’s hard to distinguish what’s a real, understandable, everyone-goes-through-this kind of limitation, and what’s an oh, hey, you’re screwing up limitation. I worry that my limitations are more of the latter variety. Sure, I could only get home when I got home, but couldn’t I have gotten their costumes fully ready on the weekend? Couldn’t I have better supported my husband in working on their costumes by, say, explaining (he’s never before been in charge of costumes/wardrobe) how to navigate Emilia’s sartorial indecisiveness? Couldn’t I have done something better? Am I doing this all wrong?

The measure that I’ve set for myself, of course, is one that considers only the amount of love that I express, and the integrity of the care that I provide. But Halloween costumes aren’t constructed out of love, no matter how eloquently I can insist the contrary. Emilia had a wonderful time in the costume that she contrived for herself, but what would have I done if she hadn’t? What will I do when she doesn’t?