Apparently, It Doesn’t Get Better: On You And Me And Us And Dan And All The Bullies In Between 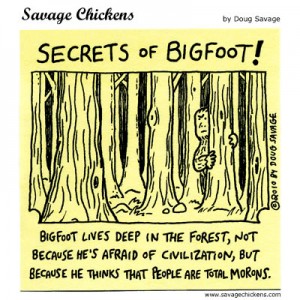 UPDATED BELOW. BECAUSE I SLEPT ON IT.

When I was nine years old, I saw Bigfoot.

They were – my peers in the fourth grade at Davey Jones Elementary in Pitt Meadows, B.C. – predisposed to not believe my story. I had, after all, made the socially fatal error of turning up on the first day of school – my first at that school, in a neighborhood to which we had only just moved that summer – in green satin pants with a matching green jacket emblazoned with a glittering iron-on roller skate decal (it was the seventies. I liked roller skates. I make no apologies.) I didn’t have many friends. Any friends, really. They called me Green Pickle Martian. So when I stood up during Show And Tell and told my story about seeing, in the woods by Harrison Lake, a giant, upright, furry creature that was, I was certain – I was certain – Bigfoot, I should have known that I was not addressing a receptive audience. I should have known – I know this now – that they’d laugh at me, that they’d mock me, that they’d surround me in the schoolyard and shout LIAR LIAR PANTS ON FIRE HANGING ON A TELEPHONE WIRE (“You’re a liar, Martian. You’re a lying liar who LIES and you’re UGLY and you wear ugly clothes and you’re a GREEN PICKLE MARTIAN. WE DON’T LIKE YOU.”) I should have known that they’d not only not believe me, but that they’d use my story as a reason to cast me out further. I should have known, but I didn’t. I know now.

I know even better now, actually, because I see grown-ups – grown-ass adults who should know better – doing this – circling the outsiders, pointing out how they’re different, pointing out how terrible those differences are, pointing out how you can’t trust people who are a different, because, you know, they’re different, they’re not like us, you can’t trust them, they lie – doing this all the time. I see people doing it, even, who I think should know better. I see people doing it who, if their kids did it – circled some kid on the playground, because his clothes were too shiny or his voice too loud or his stories too fantastic, and needled that kid, poked that kid, told that kid that he was TOO THIS and TOO THAT and A LIAR – would (I hope?) pull their kids aside and say, in loud whispers, no. No. THAT IS NOT OKAY.

Because, no, it is not okay. But people do it. People that I count as my peers and friends do it. I fear that I have done it. I have certainly had it done to me. I am – I have been, for several weeks, months even – watching it be done to someone that I know. Someone that I like. I have been – behind the scenes, too quietly, more quietly than was right – grabbing arms and stomping my feet and insisting to those whose voices are loudest that, really, come on, guys, stop, STOP, let it go, let it GO, leave it ALONE, leave HIM alone. I have been waiting for someone other than me to step in and say something.

I have been waiting in vain.

You might not like the writing of Dan Pearce. You might not like how Dan Pearce promotes himself. You might think that Dan Pearce’s blog is the Internet equivalent of ill-fitting green satin pants and roller disco jackets, and that his stories are Sasquatch-level fabulisms that really just defy belief and that all that – ALL THAT – is just beyond the pale, because, seriously, you would never wear that and you would never say that and, god, did you know that he’s, like, probably lying in most of his posts, maybe? That’s what you’ve heard, anyway, that he’s a liar and that’s just not how your crowd rolls and, god, ewwww, what if anyone thought that you liked him? Or that you were like him? That would just not be cool. That would make everyone think that you were not cool.

You can’t have that, can you? So, you know what? You can just ignore him. That’s an option. You can just pretend that he’s not there. I mean, really. He’s not following you around. He’s over there, in his corner, doing his thing. And sure, fine, it’s not your thing, but who cares? He’s not hurting you. He’s just telling his stories. Maybe you think that they’re Sasquatch stories, and maybe you think that he’s telling them too loudly – oh, god, you can HEAR HIM, can’t you? – but WHATEVER. You know? WHAT. EVER. What was the Internet invented for, if not to give us all a place – a messy, loud, chaotic, anarchic place – in which we could all just do our own thing? Rock our own jam? Put on our green satin pants and our roller disco jackets and just go for it? TELL OUR STORIES. HOWEVER THE HELL WE WANT TO TELL THEM.

Seriously. Why can’t we just leave him alone? I don’t care if you don’t like how he does things. I don’t care if you don’t like his stories. I don’t like 50 Shades Of Freaking Grey. I’m not trying to expunge it from the world. It has as much right to its place in the cultural discourse as do my half-crazed ramblings about swaddling and depression and ravaged nipples and Frankenvulvae. The beauty of this space – the revolutionary nature of this space – is that it is democratic. That it takes all comers. Bring it your tired, your poor, your brash, your silly, your ridiculous, your writers of press releases, your fabulists, your huddled masses of storytellers yearning to be free. There is room for everybody here. I thought that we all understood that. And I thought that what made our community different from all the others was that we – that most of us, anyway – understood that, in addition to the glorious anarchy of everyone rocking their own jam in this space, there was value in civility. In following one – just one – important rule: don’t be mean. Call out a hater, call out a troll, defend your friends from bullies, defend everyone from bullies – but don’t be the bully yourself. Don’t be the hater. Don’t be the troll. Don’t be the asshole.

I’m seeing a lot of people be assholes.* It hurts my heart, it really does. Because all you all who are expending so much energy calling out this one guy, this one guy who has never done anything to you, this one guy who has done nothing worse than promote himself (in your eyes) too heavily, and tell stories that (you think) are too fabulous, this one guy who you have never met — I expect better of you. I don’t expect you to like everybody, or to welcome everyone into your/our community, but I expect you to not be mean. I expect you to follow, here, the same rules that you would expect your children to follow on the playground: treat other people as you would have them treat you. Play nice. Throw no sand. Do no harm. Even if the other kid seems too loud, too weird, too different – even if the other kids don’t like him – especially if the other kids don’t like him – do no harm.

I’m not going to waste anyone’s time explaining that I’ve spent time with Dan – in real-live person, just in case anyone is still worried that he’s a fifty-year old divorcee from the Ukraine, having us all on – because what Dan is like (for the record, he’s lovely) is beside the point. I don’t expect you to refrain from haranguing him and investigating him and calling him a LIAR LIAR PANTS ON FIRE because he’s really actually super nice in real life and gosh-golly if you could only just meet him you’d like him, like, totally. No. I expect you to refrain from being assholes because it’s not cool to be assholes. Because it’s not cool to be mean to people, just because they’re not your kind. Because if your kid came home and told you that she spent her day laughing at and calling out that weird loud girl in the corner, the one who talks about having seen the Sasquatch, the one whose clothes are just weird and who totally tells lies – everybody knows it Mommy, really – and what would people think if that’s what they thought everyone in Miss MacNeil’s first grade class was like? You would grab her hand and look her in the eye and say, no. No. That’s not okay.

At least, I hope that you would.

*Because I think that this was unclear: I don’t think that everyone who has criticized Single Dad Laughing is a troll or a bully. There has been some careful, reflective and constructive criticism and commentary on the issues that his practices and success raise, and the implications for our community. John Cave Osborne, Katherine Stone (in comments; Dan credits her for prompting considerable self-reflection), Cecily Kellogg and Liz Gumbinner in particular have been gently and constructively critical, and I think that such criticism is not only valid, but necessary. The key here, though, is that they’ve addressed the issues, and not the man, and they’ve done so in a way that encourages reflective community dialogue, as opposed to LET’S GET THAT GUY. LET’S PROVE THAT HE’S EEEEVIL.

And here’s the thing – I just don’t know what the real difference is between my critics and Dan’s. Everyone who I’ve heard defend his interrogation says the same thing that my critics have said: that his bullshit needs to be called out. Those with whom I’ve raised this comparison argue this: that I’m different, because I’m not false. I’m not what my critics say. But my critics would roll their eyes at this. They believe that there’s evidence to the contrary. They are passionate. They believe that they’re right. We always believe that we’re right.

I’m just asking that we take care, here. That we remember that there’s a real person, with a heart that is vulnerable to hurt, on the other side of our wall. That we ask ourselves, always, what we would say if the Dan in the picture was a friend of ours. If he was us.

/image from Savage Chickens at savagechickens.com