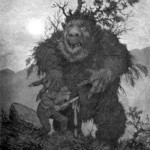 Step 3: IGNORE THE TROLLS. Do not look at them, do not respond to them, do not point your finger at them and scream TROLL, because the only thing that trolls love more than the sound of their own voice (virtually rendered in the spaces of our community as unpleasant/derogatory/inappropriately critical/unnecessarily smug/indisputably bitchy words on the screen) is the sound of other voices responding to theirs. And what a troll hates more than anything else? The deafening silence that resounds when their words fall into the dark, empty pit of nobody cares, the dark, empty pit that rings only with the hollow echo of their mean spirits hammering against the walls of their vacant souls.

And in the space where you might otherwise have been tempted to put a rejoinder or rebuttal or argument or smackdown? Put love. Put friendship. Put community. Put laughter. Say something nice, something friendly, something clever, something ridiculous, something vapidly amusing, something about coffee or chocolate or how much you love person X or how much you admire person Y or has anybody seen that awesome thing that person Z wrote yesterday? or oh, look, roller skating babies!

And then move on. And forget that you ever saw that troll under that bridge because really, there are so many, there are always so many, always spilling out from the muck and the grime and reaching out with their spindly, warty arms and grabbing for attention, but they only have power if we let them, if we choose to see them, if we acknowledge that they’re there, if we let them seize that attention and hold it and turn it ugly.

Let’s not let them.

*I know, I know. I don’t always do this. This is as much a reminder to myself as to anybody else.

**And? I know that this can be hard to do. But I think that it’s the only thing that makes any sort of difference. Fight hate with love. Don’t give it space to grow. Shut it out. SHUT IT OUT. Plant these spaces with good seeds and sunlight and clean water and care and weed out anything that produces rot. That’s all there is to do. Really.

***We don’t even need to discuss why I wrote this. (ed. note: except for what I wrote above about why I wrote this.) Let’s just MAKE THEM GO AWAY by ELIMINATING THEM FROM THE VERY SPHERE OF OUR AWARENESS. (whips out canister of Troll-B-Gone) (pffssst-spray-pffssst). What trolls? Where?

****The claim has been made that it’s just critical commentary, and who is anybody to shut down critical commentary, and didn’t John Stuart Mill say something about how even bad ideas need to be permitted in the sphere of public discourse, yadda yadda…? To which I say, sure, and maybe this is something that we should talk about at greater length sometime. But John Stuart Mill also cautioned against words and ideas that cause hurt and harm, and I would argue that in the case of communities like ours – and we are a community, right? – we have a special obligation to ask ourselves, always, when we are tempted to take critical aim at each other, what is our intent? Is it to hurt? To discount? To silence? To cast aspersion? To make ourselves feel better about our own limitations? Where our intent is questionable, we should think twice.

Now, you: I asked this yesterday on Twitter, and I’ll ask it again here… tell me a happy thing. Tell it to me here, in the comments, or on your own blog, or in a photo or a tweet or whatever… just, give some light and air and space to happy things. Baby smiles, dry vodka martinis, meteor showers, Mad Men, chocolate, doing good, wearing tutus, peonies, shaggy haircuts on toddlers, double espressos first thing in the morning, Spanx, cupcakes, friends, butter, you name it. I want to hear it. We all need to hear it.