The Mom Avoids The Picture

You’ll find almost no pictures of me on this site. There’s one on my About page, of course, and two or three of me speaking (although at least one of those is of my shoes), but otherwise, I’m nowhere, visually, to be found. This, even though I’ve posted thousands of photos here. Thousands.

The thing is, those thousands of photos are mostly photos of my kids. These are, with very few exceptions, photos that I’ve taken, which is one of the reasons that I’m not in them. But that’s not the whole story; it’s not impossible to arrange things such that the photographer appears in the picture, and in any case, Kyle takes tons of wonderful photos, some of which I’m not even hiding in. The photo on my About page, for example: I let him take that. I didn’t even try to cover my face with my hair, or effect a belly-concealing posture (mostly. I did squat.)

Here’s the thing: I’m not in the picture because, like Alison Tate, I don’t want to be. Not because I’m behind the camera — I can get myself out from behind the camera if I want to. It’s just that I don’t want to, not really. Because although I love the idea of having lots of photos of myself with the kids, so that they’ll have lots of photos of me, I’m not in love with it in practice. I’ve never loved seeing photos of myself. In the best cases, I don’t mind the photo – that photo on the About page, for example – but in most cases those photos make me cringe. The ‘me’ that appears in photos is not the ‘me’ that lives inside my head, or even in my mirror. I don’t want to say that I photograph badly – there are some good pictures of me out there – it’s more that I photograph differently. Especially now that I’m a mom, and out of my thirties, and more likely than not – especially if I’m with my kids – to have uncombed hair.

Which is, when you think about it, kind of dumb, but look: it’s my dumb. It’s not something that’s going to change. I’m not going to all of a sudden see myself in those photos and go, yes. Yes. That is my wonderful frizzy hair, behold! As much as I’d like to, and as much as I know that doing so is the right and good and pro-me thing to do, it’s a tough ask. What’s easier is for me to just suck it up, and remind myself that I don’t want my kids to look back over their family history and see only a shadow where their mom should stand. 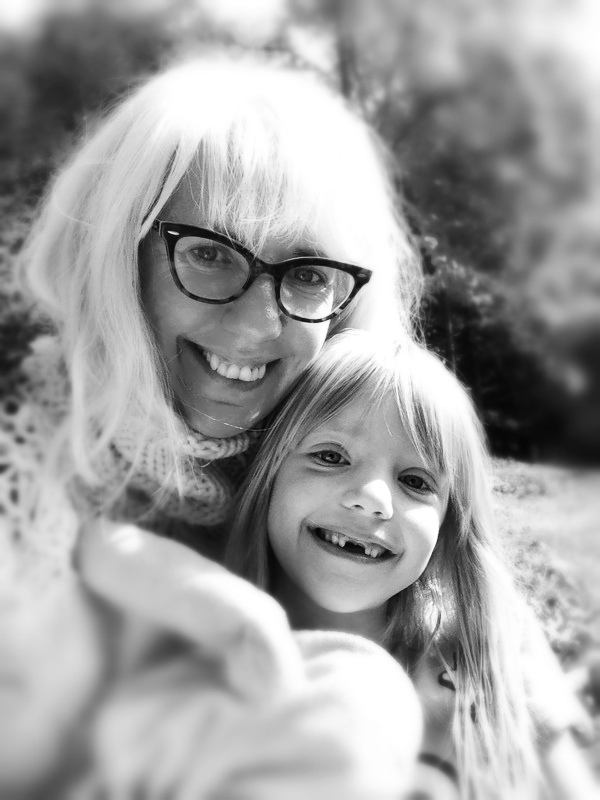 I encourage you to take yours.

(Note that the plush, vaguely phallus-shaped creature in the foreground is not a ploy to distract you from my frizzy hair. Mostly. BABY STEPS.)