Some years ago I heard Abigail Disney speak about her documentary films and about her belief in the importance of telling women’s stories. She had made a film about women and war, she said, because women have historically been written out of that story. And why have they been written out the story? she asked.

Ooh, I thought. Excellent question. I pulled out my notebook and started scribbling. We could ask that about the story of the family, I wrote, thinking of all the times that I’ve argued that mothers have been denied authorship/authority over those stories. Why have women been written out of that story?

And then I scrawled a big inky question mark beside those notes.

And it’s not because we weren’t there. Women have long had a place in stories and theories of war. As causes of war (Helen of Troy, anyone?), as victims of war, as supporters or protesters of war, and as warriors in our own right. Athena was a warrior goddess. Boudicca was a warrior queen. Joan of Arc was a warrior girl. Spartan mothers were legendary for their ferocity in matters of battle (Jean Jacques Rousseau used the example of the ‘Spartan Mother’ – the woman who, upon asking a messenger for news of the war and receiving his response that her sons had been slain, said, ‘vile slave, was that what I asked?‘ – as his primary example of the hypothetical good citizen.) Machiavelli reminds us that Caterina Sforza abandoned her children to avenge a political conspiracy against her husband (‘and to show that she did not care for her children, she showed them her genital parts, saying that she still had the mode for making more of them.‘ One of the original bad mothers, she.) And there’s been excellent academic work on the rhetorical use of language related to mothers and motherhood in popular discourse around contemporary war-making. Women are all over these stories. They are the ships, the weapons, the nations, the motherlands in these stories. Our inclusion is not the problem. Our authority – qua authorship – is the problem.

So it is with storytelling about motherhood, caregiving, and the domestic lives of women and girls, as I’ve argued in this space so many times. Parenthood and the family have been topics of concern and rich sources of ideas for writers and thinkers throughout human history – the family, as even Aristotle argued, is the core unit of human society, after all – and mothers figure centrally in the stories and theories and general discourse emerging out of those interrogations of parenting and the family. But mothers have rarely been the tellers of those stories. Men (not even always fathers, which is another topic altogether) have been the tellers of those stories. Until now. The Internet and smartphones and cameras-in-phone (the tools of creating, telling and scaled public sharing of stories, all in our pockets) have provided us with the space and the means to be the authors of our own stories, and we have, for some years now, been busily taking advantage of that space and that means to assert our authority, in all senses of the world. We have built an entire industry upon that authority – the online parenting and women’s lifestyle spaces and all of the platforms and tools that attend these are worth (counts fingers) kajillions of dollars. We are women, and new media has given us the opportunity to roar.

I’m not telling you anything that you don’t already know, of course. But it’s worth repeating, again and again and again and again, because even though we know the power of that authority, we’re still not asserting it enough, nor are we, I think, recognizing its revolutionary character. We still hem and haw over whether to embrace or reject the term ‘mommy blogger.’ We still clutch our pearls and demur when asked to celebrate and share the stories of our personal success. We still cling a little bit to the idea that we aren’t real writers or real activists or real business people or real filmmakers if we aren’t doing at least some of that work – and receiving recognition for that work – offline. We still hesitate, sometimes, to call ourselves writers and activists and business people and filmmakers. We still hold back from fully asserting and celebrating – publicly and widely – our authorship, which is to say, our authority.

We still think, I think, that there’s something about motherhood – about womanhood – that requires us to maybe keep just a little bit quiet about it. We still think that it’s all fine and good for us to discuss these things amongst ourselves, but that we should not expect anyone else to listen or to care. That has something to do, I’d argue, with the pervasive cultural idea that womanhood and especially motherhood are meant to be lived and shared only (or primarily) in the private sphere, and not the public. It’s aggravated by the fact that we live in a society that often openly snickers or rolls its collective eyes at the discourses of womanhood (ladies be shopping and gossiping!) and motherhood (diaper bags! breastfeeding!) , and that openly expresses its discomfort, and sometimes irritation, with the experiences of womanhood and motherhood. It’s a problem that feeds upon itself, because the more reluctant we are to insist that our stories – told by us, on our own terms – really matter in the bigger scheme of public discourse, the more endures the doubt that fuels that reluctance, and the more endure the cultural expectations about the private character of the lives of women and families that fuel that doubt.

We need to be story warriors for our own causes, and for whatever causes we take on. Because when we deploy our stories, we are formidable. You’ve seen it. You know it. 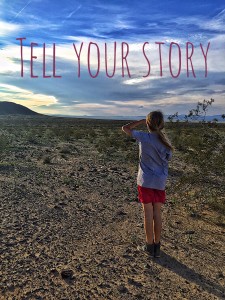 So whatever that cause is – I won’t presume to tell you what you should fight for, or against – wield your stories as arms and use them to force change. Because your stories can force change – you need only tell them.

This is post revisits a piece that I published on this site years ago (6 years ago!) I’m looking back at the work that really fueled my own sense of purpose, looking for the throughlines – and the idea that women’s and mothers’ storytelling is a force for change is a big one. I’ll be coming back to it.