It’s the kind of thing that happens in recurring nightmares: you’re standing on stage in front of a vast auditorium, a thousand expectant faces turned toward you, the lights burning your eyes, when you suddenly look down and realize that you’re naked. Nude. Starkers. Completely and totally sans pants. And although you want desperately, desperately, to flee the stage and cover yourself, you can’t, because for some reason your legs won’t move, and you’re stuck there, under the burning lights, under the gaze of the audience, terrified as shit, and you must, somehow, go on.

And then you pinch yourself and you wake up, the relief washing over you in cold sweat.

Or, if you’re me, you don’t wake up, you just look up and realize that, yes, this is really happening, and that although you are (small mercies) wearing pants, you are sobbing your heart out, on stage, in front of more than a thousand people, and that public emotional nakedness feels an awful lot like how you imagine public pantslessness to feel. Which is to say, scary, and more than a little embarrassing.

In hindsight, of course, it was a liberating and empowering experience. I feel courageous in a way that I didn’t before; I feel that I accomplished something important in having walked through the valley of fear and come out the other side, whole. It’s not unlike the feeling of accomplishment that I felt after having given birth to Jasper under such trying and terrifying circumstances: I didn’t expect to feel such fear during his birth (just as I didn’t expect, as an accomplished lecturer, to feel fear during my community keynote address), and so surviving that fear turned out to be something of a unexpected gift. I surprised myself with my own strength; I discovered that I could, as they say, feel the fear (and the parts tearing) and do it anyway. But just as with Jasper’s birth, although I was proud of myself, in doing the keynote, for getting through something that was unexpectedly frightening, I can’t say that I’d want to do it again.

Or maybe I would. I don’t know. Sharing the story that I did with the thousand-plus women in the Sheraton Ballroom was in many respects more intimate and personal than was sharing that story here – this surprised me, because although I know that more than a hundred times that number have read the story online, I had figured that speaking the story would be less intimate than writing the story. I sobbed my heart out when I wrote that story, both because it is a story that breaks my heart, but also because, in writing it, I felt as though I was whispering it to my dearest friends, inviting those friends to share my secret, my mother’s secret, and to pull closer to me, and to comfort me, and to urge me on. I did not expect when I read it aloud, in an auditorium, through a microphone, my head blown up a thousand times its size on giant flat-screen monitors, that I would feel that intimacy again. And that I would, again, cry. 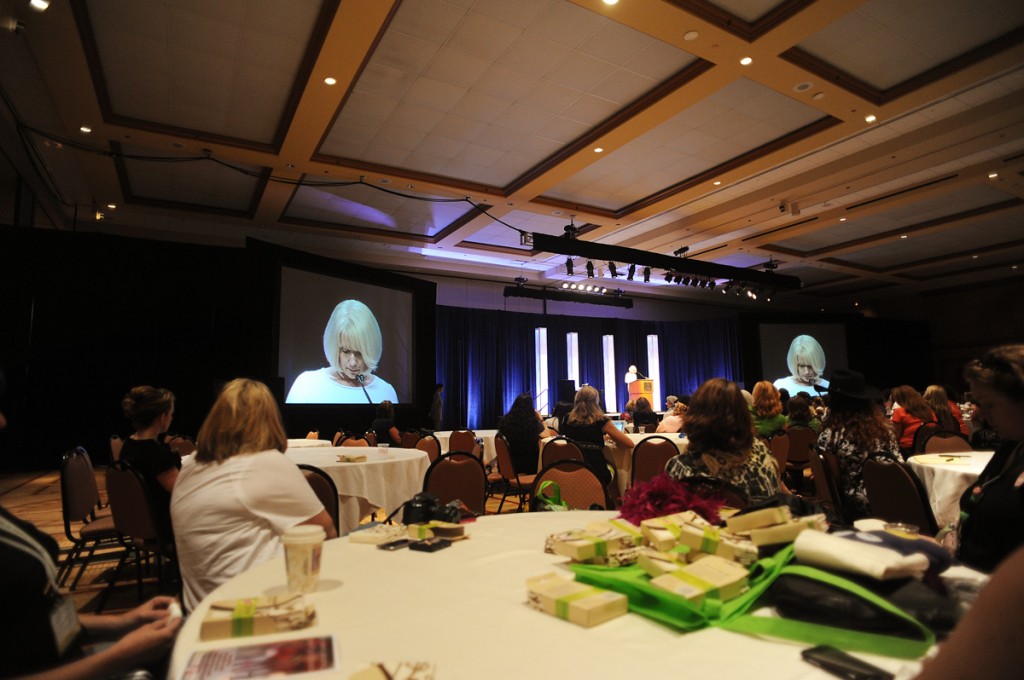 And then I cried (photo courtesy Ree/The Pioneer Woman)

This, of course, is the beauty and magic of BlogHer: the feeling – almost always unexpected, for me, although you’d think that I’d learn by now – that you’ve wandered into a landscape filled almost entirely with friends and fellow-travellers (yes, even with all the sponsors, really), that although you believe that your most intimate moments in sharing your writing occur online, in the virtual space that has come to feel like a kind of home (it is, after all, where you wear your pajamas), that intimacy can be multiplied a thousand-fold, in real life, in a room where you are surrounded by people who understand, who even though they might not know you, the real you, the you that hides behind the screen, they know your stories and they love your stories (and even if they don’t know and love your stories, they know that you love storytelling, and you know that they love storytelling, and that matters) and that binds you in a way that you can’t imagine possible until you are there.

You simply can’t imagine until you are there.

Even sobbing your heart out upon the stage, even strumming your own pain with your own fingers, even killing yourself softly, publicly, with your very own song, even then, you feel the bond. Especially then. Because it’s then that you learn, or re-learn, that the community out there – that tribe of moms and foodies and fashionistas and bargainistas and techies and pundits and crafters, that tribe of women, that tribe of geeks, that tribe of storytellers – is your community, in all of its difference, because it is a community of people who understand why you are compelled to tell your stories, and how hard it can be sometimes to tell your stories, and how good the telling feels, even when it is hard. It is a community that shares its stories, that loves its stories, that honors its stories, and the tellers of those stories. Even when those tellers drop their figurative pants upon the stage and moon the audience with their souls. Especially then. So it’s my community, and I am honored to have had the opportunity to bare the ass-cheeks of my soul in its direction, and grateful to have felt the waves of love and encouragement in return.

Which is to say that, yes, maybe I would do it again. With or without pants.

Because many of you have been asking, yes, there has been progress in the search for my brother. It has been complicated and emotionally painful (for both myself and my mother), and so I have had moments of wanting to give up the search. (If you plug “Lost Boy” into my Lijit search widget you’ll get all the posts that I’ve written on the subject, most of which I’ve linked in the previous sentence.) But I have not given up and will not give up and I will keep you all posted, I promise. Thank you all, so much, for your love and support.