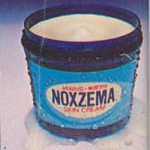 Let’s say that you go to the drugstore to buy diapers and tampons and Vanity Fair magazine, and while you are there, you buy one of those little tubs of Noxzema – not the big one, the one that slides to one corner of the shopping basket and tips it with its weight, the little one that fits in the palm of your hand – and you take it home with you, whereupon arriving you take it immediately to the bathroom, thinking, I will just open it up and smell it, because you know that the smell will transport you, you know that it will make you feel fifteen again, and who doesn’t want to feel fifteen again, just for a minute, to feel fifteen the way that fifteen feels when a fifteen year old is standing in the bathroom with a tub of Noxzema in her hand, listening to the clatter of her parents in the kitchen downstairs, believing, knowing, that the thick smelly cream, deliberately smeared – upward, upward, so as not to pull down on the skin – will lift all the dark crud from her pores and from her anxious, adolescent soul.

So you stand by the sink and you open it, and you lean down to inhale (why do you bend to it? Why do you not lift it to your face? You wonder whether you do this with toothpaste, too, and briefly consider brushing your teeth to test the theory, but the Noxzema calls, and so you make a mental note for later) and the tip of your nose brushes against the thin blue edge of the jar and you inhale the cold, antiseptic smell (minty but something more than, other than minty; not the mint of toothpaste, but a sterile, flavorless mint, the crisp menthol of Irish Spring and Windex and pine and paste; flavorless, but nonetheless inviting to the teeth, a smell that you can feel push up against your gums and your tongue, a smell the texture of which you can imagine in your mouth) and you resist the temptation to just push it right up against the smooth white surface of the cream, you resist, because that small, unbroken expanse of white demands to be probed by fingers, so that the thick cold of it can be pushed upward like plowed snow to be plumbed and scooped and spread thickly across the nose and cheeks where it will immediately cause one’s eyes to water.

And that is exactly what you do, you plunge your fingers – forefinger and middle – into the thick cold cream – a cream that is almost too dense to be called cream, but still – and you scoop it and you lift it and you spread it down the bridge of your nose and then across, under your eyes, to your cheekbone, and from the moment that it touches your skin you are transported, transported, and you are fifteen again and all of the beauty and fear and angst and warmth of that is right there on the other side of your eyelids, which are squeezed shut, of course, tightly, because how else are you supposed to ride this moment, this moment that has taken you so completely out of your forty-year-old diapers-and-iPhones life and left you somewhere else entirely?

If only they still sold Love’s Baby Soft. You might never leave the bathroom again.

I’m sick, feverish-and-snotty sick, and Emilia has been asking about death again in that totally matter-of-fact way that sometimes unnerves me, and I am still struggling to work my way through all of the emails – some of which, weeks old – about and for Tanner and every one of those emails makes me cry – in a good way, but still – and I am exhausted, exhausted, and we’re going to have a holiday at the end of this week, just us, our family, and I’m beyond thrilled for that but I can’t be sick and exhausted for that, I can’t, so.

And then there’s Africa. I’m going to Africa in three weeks. (Someone could come with me. You could come with me. We could sing “We Could Be Heroes” to each other and try to be ironic about it. Then we’ll get there and cry a lot and be changed and we’ll try to not be ironic about that, either, because it’s lame to be ironic about that sort of thing, it totally is.) (I won’t have to try, actually, because I have a very hard time being ironic about anything, even though I have, at times, worked very hard at it. I am, at my core, sappy and credulous. I try to view it as a strength.) Anyway. I’m going to Africa. Lesotho. For this. It’s blowing my mind a little.

Not enough to stop my nose from running, though. That’s a real disappointment right there.

What’s your best sense-memory trigger? The smell of Bonne Bell lipsmackers? The taste of Coke out of a glass bottle? Frosted Lucky Charms? New car smell? Old Spice? Share it in the comments. I feel like doing some sense-memory tourism.