All That Is Solid Melts Into Air

I should know by now that when my sister posts on my Facebook wall, it’s a bad sign, because my sister – bless her – believes that Facebook is the best way to reach me when there’s something urgent to communicate. That she could also reach me by phone or email – I’ll grant that I do not always answer my phone, but I do check my email regularly, and in fact only get Facebook messages through email, because I ALMOST NEVER GO ON FACEBOOK – is a detail of modern telecommunications that she has chosen to ignore. She alerted me through Facebook that I needed to call her when my grandfather died, and then again when my dad died, and – here we get to the thing that I really want to talk about – again last night when I needed to be informed that our mom has an aneurysm that is growing at an alarming rate and needs to be surgically removed at the earliest opportunity but, oh god, the doctors aren’t sure her heart can handle it and all of this was signaled to me by a public Facebook posting of CATHY YOU NEED TO CALL ME OR MOM. And then: LIKE, TONIGHT.

So, yeah. This is why I don’t like getting Facebook messages from my sister, who I otherwise adore. When those messages landed in my inbox, my heart dropped, and it dropped hard.

I called my mom immediately. I knew that the news had something to do with her – if the news pertained to Tanner, Chrissie would have just said CALL ME – and because I knew that she’d had a CT scan late last week, I knew that it had to do with the aneurysm, which we had all been hoping was not growing and not going to pose any threat to her life. So I knew that if my sister was freaking out on Facebook about me needing to call Mom, it was because the aneurysm was now posing a threat to her life. As I said, my heart dropped.

“Sweetie! I was just thinking about you! And I was just opening my computer right this minute!” Presumably to log on to Facebook. Or post her prognosis to Twitter, or to her blog. God, my family.

My mother is probably one of the funnest people on the planet. Even when life takes its grimmest turns, my mother can always find some point of humor. Even when she’s angry, she makes jokes, and cracks herself up, and it was one of the banes of my teenage existence that every time I was mad about something, she would make faces at me until I laughed and forgot what I was mad about, which usually made me madder. It was complicated. She’s complicated. I adore her

“Mom, if I’d gotten an email from you that said oh, hey sweetie, things have taken a turn for the worse and I’m facing life-threatening surgery, but don’t worry! I’d have had to never speak to you again. These are things you call about. Like, immediately.”

“Oh, Catherine Ann.” My mother is able to communicate the rolling of her eyes over the telephone. She did so.

You know I worry so you need to promise me that you’ll be okay.

You need to be okay.

You know I worry.

I do worry. I worry relentlessly about my mother, and have done since my dad died. When my dad died, it was the realization of my worst fear, the fear that I knew would be realized someday but had nonetheless managed to stay in denial about because, god, it is just easier on the heart and soul to believe that your parents are immortal. It doesn’t matter if death is already your shadowy companion, a persistence presence in your life, because even when you know, you know, that death is inevitable, you can still deny it, and you do, because death is just not conceivable until it happens. So it is that we all of us in our family live with Tanner’s prognosis in a manner that is best described as ‘mindful denial;’ we know that his death is inevitable and proximate, but we live with him in the spirit of death’s impossibility. The Tanner-less future is inconceivable. Or, rather, has been inconceivable. It is more and more difficult to deny that future. That’s a crushing thing, and it’s because it is a crushing thing that we’ve compartmentalized it for so long. 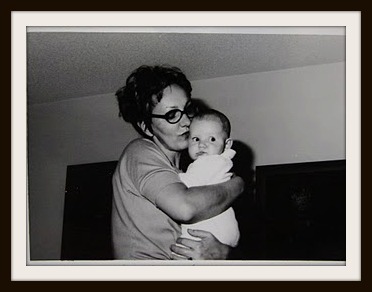 My mom and me, in our world, back when it was still black and white.

I am terrified of that world. Terrified. I don’t even have words for that terror. It’s a terror that makes me feel small, that takes me back to being six or seven years old and slipping into my parents’ room in the middle of the night, blanket in hand, to sleep on their floor so that I could make sure that nothing happened to them, that they didn’t just somehow disappear.

But I know that the day will come when I will have to live in that world. I know that because I am already living in a world without my dad. I know that it’s inevitable, unless something happens to me first, which, god, is a whole other bag of soul-rattling anxiety related to fears concerning my children and my own role as a parent. So I have to live with that knowledge, that fear. I have to live with it, but not let it get in the way of living and loving, and living with and loving my mom. I have to not let it get in the way of celebrating my mom. I have to let it be a reason – to be more reason – to always celebrate my mom, to exult in the wonderfulness of my life with her.

Because she is awesome, and I am lucky to have her, and that’s all that matters.

(I had intended to write a post today about how my mom was and is my mentor mom – she’s the original bad mother – but I’ve been so rattled by the news from last night and all I can think about when I think about my mom is all the hand-wringy stuff that I rambled on about above, which is entirely against the spirit of the last few lines of that post, but this is a process, people, okay?