Yes, You Can Take Your Kids To A Luxury Resort 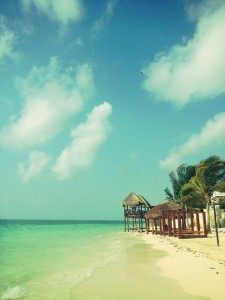 This past August I spent a few days at an amazing little place in Mexico, therapy on what issometimes called the Mayan Riviera. It was the kind of place that you gleefully whisper to your friends about, over drinks on cold winter nights: ‘we found this amazing little place on the Mayan Riviera that we just loved. No, nowhere near the strip at Cancun. No, you won’t have heard of it.’ You know, the kind of place that you brag about finding, because you’re all about those little places off the beaten track. You’ve never been the type to hanker after the Club Med experience, and you think that Sandals sounds like beachside strip joint. You’re a quiet hidden places kind of girl, and you like your travel to be special. At least, you did before you became a parent. Once you became a parent, you were forced to confront this fear: that all your beach vacations (such as you could manage to find the time and resources to take them) for the next umpteen years would be at loud places clogged with volleyball nets. Buffet tables. Sunburns. Noise. You know, the way that family-oriented all-inclusive resorts are. Resort-y. Those are the only places to take kids for a beach vacation, really, unless you have access to a house in the Hamptons, which you don’t. Your love of the hidden jewel, the serene seaside retreat – you would have to bury that love until… when? Retirement, probably.

That was me, anyway, until I landed at the Azul Beach Hotel by Karisma in Mexico.

The Azul Beach is that hidden gem – and it’s a family-friendly all-inclusive beach vacation. There’s a kids’ club – and a smashing good tequila bar. There are kids toys on the beach – and private, cushioned palapas for lounging with a book. There are suites that front right onto the edges of the many pools – with beautifully designed rails and gates to prevent children from tumbling into the water. There is fine dining – fine, fine dining – and ice cream for the kids. There’s a spa – with a beautiful separate room for mom and daughter pedicures. And did I mention that there’s a kids’ club?

I went without my kids, because I’m terrible that way, and the Azul Beach was no less impressive for being there as an independent grown-up. It was the kind of place – peaceful, beautiful, restorative – that I would have delighted to find before I became a parent. It was the kind of place that I would have expected to not find parents at – not, that is, parents with children. It was the kind of place that I would have thought wouldn’t have even allowed children. ‘Adults-only,’ which is what I preferred before I had kids, and – if I’m being honest (here comes the parental heresy) – which I sometimes still yearn for. And that is precisely what made the Azul Beach Hotel so wonderfully special: it felt like an adults-only retreat that happened to have children. Wonderfully well-behaved children that toddled and tumbled around in the background, like some rose-tinted dream of what life with children could be like, if the world ran on rainbows and sunshine and Mary Poppins was in charge. (The minor exception here: the weird British tween who kept bringing his iPad to the swimming pool. My Judgy Mom hackles bristled at that.) My theory as to why the Azul Beach seemed to operate in that alternate rainbows-and-sunshine universe: put children in a beautiful, serene environment, and give their parents tequila and ceviche – such that they can’t help but become themselves immediately serene – and you get serene children. Children that still play and shout and physically express their joy, but without the manic freakiness that so often defines our stress-filled daily lives.

You should totally go.