10 Things I Hate About Motherhood (And One That I Love)

A writer at Newsweek wrote last week about how her son – and the general state of being that is motherhood – is torturing her. Then a writer at Jezebel responded to the story with something very close to exasperation: “I was left, as I often am by pieces on parenting, at sea. Nowadays, there is such a dichotomy at work: the hazy romanticizing of baby culture wars with the it’s-a-nightmare/I-don’t-love-my-child/I-wanted-another-sex” backlash and while one is surely designed to remedy the other, those of us who haven’t had a baby are left, ironically, with no very clear idea of the reality.” A consequence of this, apparently, is that childless women – unconvinced by the hazy romanticism of some stories and horrified by the ‘it’s-a-nightmare’ confessions of others – become terrified by the Unknowable But Very Probably Sort Of Horrible condition of motherhood and are put off having children. Population control!

The reality is, none of us can paint an entirely clear picture of the reality of motherhood, because the reality of motherhood defies tidy characterization. Which is why, arguably, we see so much cultural discourse about motherhood that skews strongly in one direction or the other: we are constantly trying to get our bearings, and sometimes it’s just easier to do so by telling ourselves that motherhood is just so undeniably all-around awesome or that holy hell this shit is HARD and sticking to those stories. And yes, those stories that skew dark are frightening, but then, so much of motherhood is frightening, notwithstanding the moments – and there are many – of awesome, so.

My stories skew in the latter direction, obviously, although I like to think that my love for my children and my love of being their mother comes through despite – or even because – those stories skew dark. In any case, I wouldn’t know how to tell those stories differently, because, although I have moments of hazy romanticism about motherhood, for the most I find mothering to be an extraordinarily tough gig, one that leaves me, at times, feeling – yes – tortured. But that’s mothering – the work of motherhood – and it’s something of a different beast than is the condition of motherhood, or the experience of being mother to one’s own children. The former can be tortuous. The latter can be sublime.

My own experience, broken down:

1.) Lack of sleep. The work of motherhood requires being on call twenty-four hours a day, seven days a week, and some – nay, if you are me, many – of the hours in which you can expect to be called will be between the hours of 12am and 6am. I have not slept a full night through in over four years. FOUR YEARS. I am exhausted. Yes, I have sleep-trained. I have even worked with a sleep doula. There is nothing, nothing, that keeps my children from waking in the night, and as I draw the line at drugging them or gagging them and taping them to their beds, I fully expect to die of sleep deprivation sometime in the next few years.

2.) Pregnancy. I loved my first pregnancy, for about three months in the second trimester. The rest of it, and the entirety of my second pregnancy, was a hell of vomiting and anxiety and back pain and heartburn and amniocentesis terror and belly itching and sleeplessness and vomiting and anxiety ETC. And then, of course, childbirth.

3.) Recovering from pregnancy and childbirth. Torn nethers. Breastfeeding-ravaged boobies. Bigger feet. Bigger ass. All the king’s horses and all the king’s men can probably never put your body back together exactly the way that it was before you had children, especially if you have your kids in your thirties and do not employ a personal trainer and plastic surgeon.

5.) Childrens’ television. This was referenced in the Newsweek article, and rightly so. With a few notable exceptions (Sesame Street; much of what airs on PBS Kids), much of what passes for childrens’ television programming seems designed for the express purpose of driving you to grab fistfuls of well-sharpened pencils and jab yourself relentlessly in the ears. The Wonderpets are the reason that I hide sharp objects when the television comes on.

6.) Child maintenance. Children need to be fed and clothed. It is easier to feed and clothe wild animals than it is to feed and clothe some children – my children, specifically, who live on a diet of carbohydrates, mangos, bananas, pickles and candy and who have more particular and eccentric clothing tastes than Lady Gaga, to the extent that one refuses to wear anything other than three layers of Disney t-shirts under a tutu. To wit: 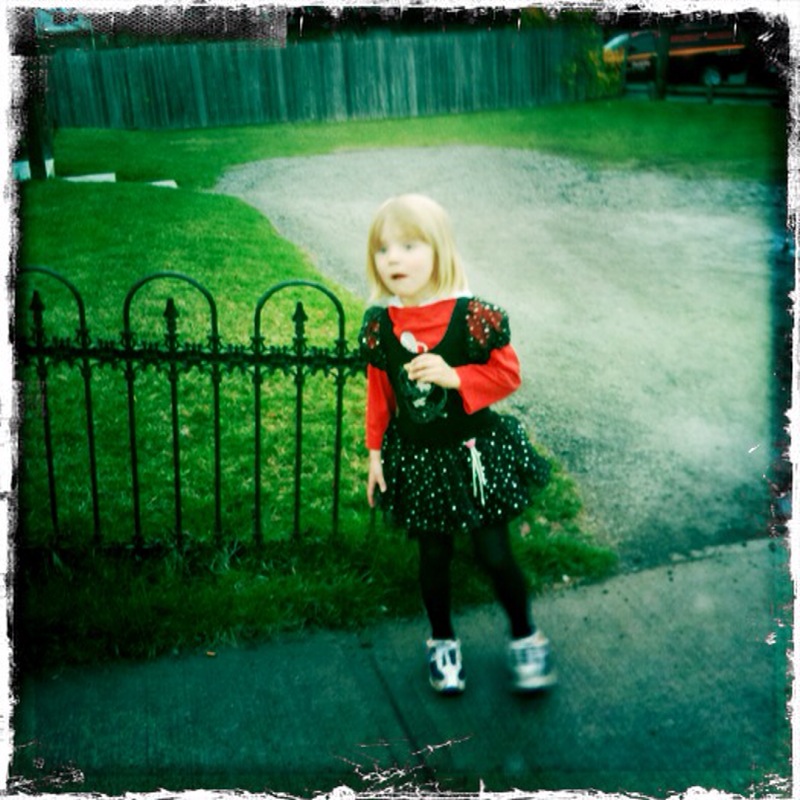 7.) Diapers. Also, potty training. The work of motherhood involves a lot of shit work, I’ll just say that. And, if you have a boy, expect to get peed on. A lot. Also: tub shits. TUB SHITS.

8.) Laundry/housekeeping. (This one, like ‘diapers,’ above, could probably be rolled into ‘child maintenance,’ but I loathe it so much that it deserves a category of its own.) Children make messes. Big messes. And they generate mounds of laundry and you spend hours and hours washing and drying and sorting and folding and putting-into-drawers but they will still refuse to wear anything other than that one Cars t-shirt, that other Cars t-shirt and the black sparkled tutu. (See above re: Lady Gaga, tub shits.)

9.) Mommy brain. Sleep deprivation, over-exposure to the Wonderpets and the near-constant hum of why-why-why-why-Mommy-why fries your brain. It just does. That’s why there are mommy blogs – we need to constantly poke at our mushified brain matter with popsicle sticks and pablum spoons and deflated binkies to remind ourselves that some of our synapses are still firing. Maybe.

But, then – and at risk of sounding unbearably, banally romantic – there is this:

1.) My children. Who are amazing, inspiring creatures and who fill my life with such light and love as to nearly, at times, overwhelm me. Who make me laugh and who make me cry and who make me laugh until I cry, every single day. Who make me grateful for my soft belly and squishy boobs and for my messy hair and my undereye circles and my scars, because these are the markers of this work that I do – this tiring, often frustrating work – and of the miracles that I have produced and that I am, every day, producing, through this work; these miracles, my children, without whom I would not know love as completely as I do. My children, for whom I do this work, if not gladly, then without regret. My children, who make it possible for me to bitch tirelessly about motherhood while still feeling, deeply, to the very tips of my toes and possibly even further, that this motherhood thing is the most beautiful – the most hazily, gauzily, barefoot-in-a-field-of-daisies romantic – thing in the world.

And if I’m clutching a bottle of tequila and an Ativan prescription while spinning through that field of daisies… well, as I said: it’s complicated. Wonderfully, terribly, delightfully so.

Quick: what’s the number one thing that you hate about motherhood? And then, what do you love? (Your kids, no doubt, but feel free to say “I get to spend rainy afternoons watching cartoons and eating cookies” or “three-martini playdates.” I won’t judge.)