Black Flies And Dryer Lint And Dragons, Oh My

It took me a while to figure why I was crying, why I kept bursting into tears at silly, random things, like an excess of dryer lint, or a dearth of toilet paper. I had just figured it to be hormones, or a passing mood, you know, the kind that you fall into when you’ve gone too many nights with too little sleep and then you open the cupboard and there’s not enough coffee for a full pot and you slump against the counter and you cry.

It wasn’t that. I wasn’t crying about coffee.

My dad died a year ago this week. I say, this week, and not today or yesterday or the other day or tomorrow, because I don’t know when he died, exactly. Nobody does. The coroner had to make a guess. “Sometime between July 30th and August 2nd,” he said. “But we have to pick a day. Any of those days significant to you? We don’t like to set the date of death on the same day as someone’s birthday or anniversary.” July 31 is my husband’s birthday. So we picked July 30th as my father’s death day. That was last year. A year ago, that he died.

The thing of it is, though, that I know that that date is just some random date that we picked because we didn’t know the real date, because we didn’t know when he died, really, and I can’t shake that knowledge. It haunts me that we don’t know, that we didn’t know, and the not knowing is a constant reminder that he died alone and that I was far away and that we didn’t know, we didn’t know, and for some reason that seems really, really important. And it doesn’t help that there is another death, coming – not today, not tomorrow, but far, far too soon – and that there exists the possibility (a possibility that I have to extinguish, stamp out, kill) that that death will not be a good death, the best possible death – if there is such thing – there is such a thing – a death at home, surrounded by, comforted by, love. That can’t be allowed to happen. I won’t let that happen. But in my darker moments, I worry that it won’t be up to me, that I won’t be able to make things be the way that I want them to be. I didn’t want my dad to die alone. It happened anyway.

These thoughts press upon me, and I fight them off, batting at them as though they were so many black flies, when really they’re not at all like black flies, they are so much denser and heavier and more persistent and when they land upon me they bite harder and more viciously than any mere bug. And I cannot stop them landing.

I try to ignore them. I can’t.

And ignoring them isn’t helping me. Telling myself that I am crying about dryer lint – because, who hasn’t cried about lint? – when, really, there are these dark, heavy things beating their wings upon my back just weakens me, just leaves me vulnerable. There is no strength in self-deception. I need to face them.

I don’t know how to face them. 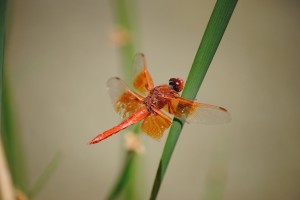 “Perhaps all the dragons in our lives are princesses who are only waiting to see us act, just once, with beauty and courage. Perhaps everything that frightens us is, in its deepest essence, something helpless that wants our love.” — Rainier Maria Rilke.

Dragons, yes. When I was blathering on about black flies that are really much, much bigger than black flies, with big, heavy wings that can knock you to the ground, I think that this is what I meant. Dragons. Monsters, with wings and hot breath. Monsters that might be princesses, in need of rescue, in need of help, in need of love. The Sleeping Beauty kind, obviously, rather than the Jasmine or Pocahontas kind, although here Rilke’s beautiful analogy starts to fall apart for me, because I am too influenced by Disney, and isn’t the dragon in Sleeping Beauty really the bad fairy, or some such? I need to revisit my Bettelheim.

Perhaps dragons are really bad fairies, and bad fairies really princesses, corrupted, in need of rescue from their corruption. Or something. Does it matter? Turning and facing the dragons is hard, because it is scary, it is so scary, and that is why I am putting tutus on them, but even that, even that, seems, in the darker moments, to not be enough.

Still, it’s all I that have. It will have to be enough.

(Please wear a tutu on Friday. Or any day. If only to make a point about fairies and dragons and facing scary things and the incredible, inestimable power of tulle. It’s a point, I think, that needs to be made.)