Dress Your Family In Moonboots And Awesome

(Disclosure! This content series and the giveaway below is brought to you by Old Navy. Check out the Kids & Baby Sale in store with great deals starting at $5. You will see how relevant this is if you read on!)

Emilia likes clothes. Emilia likes clothes a lot. Except when she doesn’t, during which times she embraces private nudism, but those times are mostly restricted to mornings, evenings, hot summer afternoons in the backyard, and pretty much anytime that she’s at home and we don’t have guests, but still. The rest of the time, she embraces fashion with a passion and eccentric flair that reminds one of Lady Gaga, or Priscilla, Queen of the Desert.

I’ve written about this before, about how she has a zeal for putting together her own (and, to a lesser degree of success, her brother’s) outfits and about how and why I more or less just leave her to it. My reasoning basically comes down to these two principles: a) I believe in allowing her to express herself creatively in any way that is reasonable and appropriate (so, for example, tagging cars with Crayola markers or going to the playground clad only in body paint are not acceptable forms of creative expression, whereas going to Picture Day at school in full Sk8r Grl Meets Snow White costume is), and b) I am too lazy to be bothered with battling her on the issue of whether she layers princess costumes over Spiderman pajamas and pairs the whole outfit with moon boots. Not everybody approves of this approach to fostering creative expression – for some, allowing children to express personal style is a surefire way to raise a quote-unquote freak (or, per the controversy around Nerdy Apple’s son, make them – horrors! – gay) – but whatever. I’d rather my daughter and son dress themselves in glitter and moon boots – or however they like – and face judgment from bland critics with Gymboree frequent shopper cards than that they experience even a moment of angst over whether I might disapprove of them putting on tutus over snowpants. Hell, I want to wear a tutu over snowpants. I want to live in a world where everyone does that.

Because, why not? Why do we not walk into shops – or our closets – and survey the shirts and skirts and pants and shoes and say to ourselves, I am in the mood for silver and sparkles and shiny things and, oh, maybe a touch of space ranger, and then just go ahead and layer it all on? Why do we not approach dressing ourselves as an opportunity to wrap ourselves in things that feel good and that make us happy and that make us smile and forget all about whether or not it’s slimming and/or age-appropriate and/or on-trend or whatever? Why do we not look in the mirror after we’ve put together an outfit and, instead of following the age-old rule that states remove one thing, we just go screw it and add some more bling? Why do we not wear tutus over snowpants with moon boots and mouse-eared baseball caps?

Why do we not put together outfits like this? 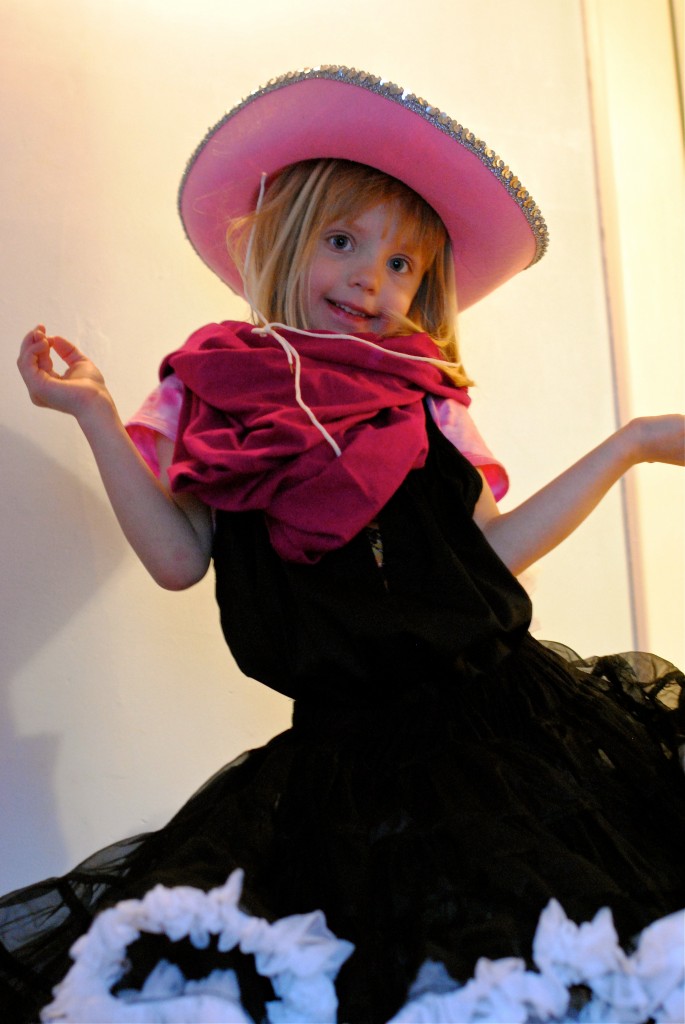 All of which is to say: I think that there might be something to Emilia’s I WEAR WHAT I LIKE BECAUSE I LIKE IT philosophy of fashion. I know, obviously, that we can’t all just turn up at the office wearing pajamas and moon boots or tutus and sneakers; I know that we can’t really turn up at parent-teacher meetings or weddings or job interviews that way, either. But we could – I could – make the effort, more often, to approach getting dressed from the position of what do I like / what makes me happy / what is going to make me feel good, rather than (primarily) according to considerations of what will people think and will I look fat in these pants. I think that we might be – that I might be – a little happier for doing so. Maybe we’d also start easing up a little bit on judgment – of ourselves, and of others.

We might also teach our kids a thing or two about how to really get the space ballerina effect with only a few artfully layered pajama tops, a tutu and some glitter. THE MORE YOU KNOW.

What lessons are your children teaching you about personal style? Or, to put it another way, what of your kids’ personal style – or just their wardrobe – would you borrow if you had the nerve (and they had your size?) What would you buy and wear if you weren’t worried about people would think? Would you wear a tutu over snowpants? (For the record, I totally would. I would also wear sundresses over pants and stripey tights under everything. And way more sparkles.) Or are you just totally against creative sartorial expression and wish that we could all just wear uniforms and be done with it? Leave a comment and you’ll be eligible to win a $150 Old Navy gift card, with which you can go to Old Navy and have your kid pick out his or her own outfit, and also one for you. (Full contest rules here.)

(Coming up in this series: I let Emilia dress me. HILARITY ENSUES.)

Dress Your Mommy In Skull Socks And Leggings