Dress Your Soul In Sparkles And Tutus

If you’ve ever wondered what it would look like if your very essence were distilled and bottled in a crystal decanter and then sniffed enthusiastically by a Celestial Soul Portrait artist who, becoming high on the fumes of your celestial essence, proceeded to Photoshop the shit out of a picture of you, well, wonder no more… (UPDATED to include excerpts from Celestial Soul Questionnaire.) 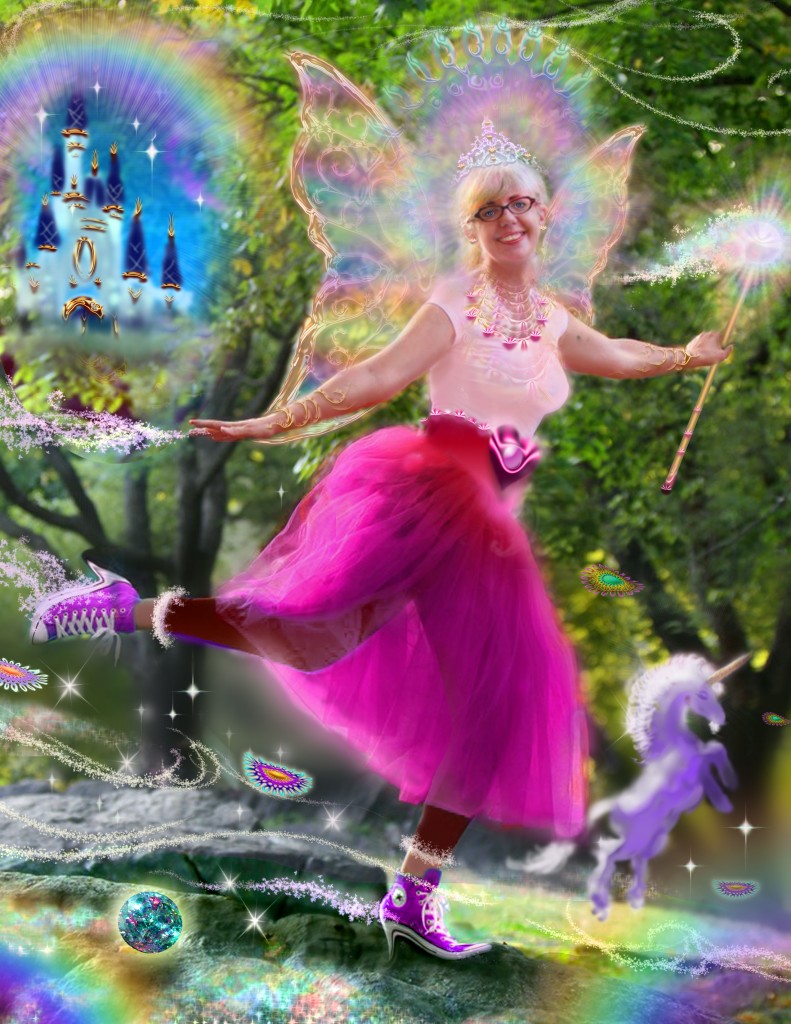 You can achieve the same effect by dropping acid and flipping through old photo albums, but that’s just not nearly as lasting, you know?

It’s been a bit a rough week for us. There are complications with Tanner that are difficult and upsetting and it’s really just not the right time of year for that. Not that there’s ever a right time of year for that – there’s no Season Of Anxiety And Sadness on the Gregorian calendar, as I understand it – but this time of year, when everything is supposed to be about comfort and joy, is a particularly difficult time of year for coping with that kind of thing. Which is all the more reason for busting out the mescaline fairy images: Santa is jolly and all, but he doesn’t have the kind of demented silliness that is necessary for taping together busted spirits. You need a dork in a tutu – and a unicorn, and a rainbow, and high-heeled Chucks, and maybe some Dora Band-Aids – for that.

Because, I mean, seriously: look at that picture up there and tell me that it doesn’t make you forget, just for a moment, that you’re supposed to believe that there’s no such thing as unicorns, or that psychotropic drugs aren’t a legitimate means of accessing the Doors of Perception. You can’t, can you? You forgot what I was even talking about a minute ago, didn’t you? SEE?

You can get your own Celestial Soul Portrait. Talk to Erial; he’ll hook you up. He and I became friends through this whole process, because, seriously, how can you not become friends with someone who sees the world through laser-colored glasses? We need more of looking of the world through laser-colored glasses, because, honestly, a laser-and-glitter empty world sometimes feels just a little too harsh.

Interested in getting to know your own bedazzled soul? You need to ask yourself questions like the ones below. Note that if you want the complete soul-picture, you also need to have a Soul Expert like Erial put the pieces of the puzzle together (and provide you with the full questionnaire) – to the untrained soul-eye, answers to questions like these just look like responses to a Proust Questionnaire, if Proust were a Dungeons and Dragons fanatic and spoke Elvish – and interpret them visually. But you can still get a sense of your inner soulscape – and also get a pretty good idea of whether that soulscape includes unicorns and rainbows and flying daisy-saucers – by reflecting on the following… (my answers are included; ignore or consider for the purposes of better understanding the epic image above.)

1 – Do you have a spiritual practice or a way that you access a higher consciousness?

I was raised Catholic, and still consider consider myself culturally Catholic, although my pursuit of spirituality in practice tends to vary between sincerely reflective and entirely irreverent. Which is to say, I love the Virgin Mary, and a few of the saints, but also Plato, and Yoda, and Gandalf, and whoever it was who invented cupcakes.

2 – What colors are you drawn to? Types of environments?

I’m a rainbow connection kind of girl. If it’s a color that splashes across the sky after rain, I’m all for it.

Types of environments? Fantastical ones. And libraries. But those are kind of the same thing, I think.

3 – Do you believe in or have you had significant experiences with extra-terrestrials, angels, or other similar beings?

I believe in unicorns. Pixies, too, although I imagine that they’re troublemakers. Oh, and, Jabberwockies, and the Mad Hatter, and basically every other creature in Alice’s Wonderland. Regarding angels: I think that they’re scary, based on what I understand of them from the Old Testament. Mary (Jesus’s mom), on the other hand, is awesome.

4 – Is there a discipline like art or music that you do on a regular basis? What are your passions and fascinations?

Storytelling, music, cupcakes, ninjas, unicorns. My degrees are in political philosophy, but it sounds super stuck-up to call one’s self a philosopher, and if Socrates refused to call himself one, I can’t very well go around doing so, can I? In any case, I think that I spend more time these days reflecting upon the unbearable lightness of unicorn emissions than I do the meaning of life, so.

5 – Are there any historical or mythological figures you identify with?

6 – Do you have a spiritual mission or soul’s purpose in this life to accomplish?

I’ve not yet discovered it, nor do I expect to, but I believe that I am nonetheless living it. Carpe diem!

7 – If you were at King Arthur’s Round Table, which character or archetype would you (per considering the following: King, Queen, Prince, Princess, Wizard, Adviser, Knight/Warrior, Maid in Waiting, etc…)

House Elf. But I don’t think that King Arthur had House Elves, so: Court Jester. Or, maybe, Advisor, but only if I were the Machiavellian kind of advisor, the kind that punked Medicis for kicks.

8 – I’m looking for your unique essence, what makes you you.

Your turn. Share some of your answers (if you do it on your blog, please leave the link here so that we can share, because soul questionnaires are way less fun if you don’t share them) and a flying unicorn will get its wings.

Siamese Cat Farms Are Going To Save The Economy

A Fart Is A Wish Your Bum Makes