When WonderBaby was not quite four months old, she fell off of her change table. Well, fell isn’t quite the right word. I can’t say that she jumped – she still being in her infancy at the time – but there certainly seemed to be an element of will in the flight that she took. I had just bent down to retrieve the diaper, which – along with the baby wipes and the butt cream and the rectal thermometer and all manner of paraphernalia necessary for the tending of baby nether regions – had been flung to the floor in the frenzy of bouncing and struggling that was and is characteristic of WonderBaby’s toilet rituals, when it happened. And in the split-second that it took for her to fling herself off of her change pad and into mid-air, it seemed that I spent an eternity lamenting my terrible, terrible parenting skills: if only I had belted her down, if only I hadn’t bent over, if only I had kept a hand on her, if only I had three extra hands, if only, if only…

In the next fraction of a second, I threw out my arms and lunged forward and caught her, like a football, inches from the hardwood floor.

My heart still pounds when I think of it.

WonderBaby has, in the year and some weeks since that first dramatic fall, pitched or hurled or tumbled herself off of and onto a variety of surfaces. She’s an explorer, and an adventurer, and there ain’t no mountain (or chair or table or windowsill or bookshelf) high enough to deter her from her quest to conquer her known universe. There’ve been more than a few head bonks along the way. And with every thud, thump, bonk and bang, I have become more and more blasé. Pick her up, dust her off, kiss her head, sit back and watch as she climbs right back onto the rocking horse.

Until this weekend. This weekend thrust me right back into the abyss of heart-pounding panic and soul-searing self-recrimination. This weekend, we faced blood, and the emergency ward.

The blood wasn’t actually the worst of it, although it seemed pretty bad at the time. WonderBaby was performing her usual dining room table acrobatics on Saturday morning – against the futile pleading and grasping of her mother – when she stumbled and banged her mouth; there was a shout, and there were tears, but it all seemed fine until I noticed that her chin and neck and chest were covered in blood. Drenched in blood. Oh holy mother of shit, I thought, she’s knocked out her baby teeth or bitten off her tongue and I AM GOING TO HELL. But I didn’t freak out, not totally. I could tell that she was fine – in the broader, she-has-not-broken-her-head scheme of fineness – that it was just a matter of figuring out what had been cut or bitten and pressing warm wet cloths against her mouth and administering kisses and mopping up the blood. My heart did not pound or spin, at least not at a speed that exceeded posted limits.

When, however, today, she flung herself out of a shopping cart and landed, with a dull thud, on concrete, on concrete, my heart spun – it spins, it’s still spinning – with all the force of a cyclone and very nearly burst the confines of my chest. It was only a moment, a split second – I was right there, I was keeping near, because she kept trying to climb out, she’s so good at climbing out, and in the split second that it took for me to turn away to quibble with the husband or he with I about some banality or another it happened, something happened and all we heard was the thud. And then, silence, for what seemed an eternity.

And then we were both there, on the ground, pulling at her, clawing at her, encouraging her screams, willing her to scream more, louder, because the screams were better than that terrible moment of silence, that moment that was just a moment ago that felt like forever when she just lay there, when she lay there, silent, on the hard hard concrete for only a second but also for an eternity. And then, grabbing her, both of us at once, and squeezing her between us and moving, quickly, together, one body, away from the cart, abandoning the cart and ignoring the eyes, the looks, the stares – I know I know I know I know I am terrible I let her jump I wasn’t there it’s all my fault bad mother bad mother bad mother – and hastening for the car.

She was calm by the time we arrived at the ER. By the time that we were ushered into Pediatric Emergency, she was fussy, and belligerent, and determined to make full use of the available wheelchairs and stretchers and bedpans for her own amusement. We sat, exhausted and diminished, while she dismantled the waiting room. She seemed fine, but we, we were not, we having clearly revealed ourselves as bad parents, the worst parents, negligent parents, our daughter having been hurt – for the second time in one weekend – while in our care. As my husband put it later, it felt as though we were made to wait in that waiting room, under the harsh glare of the lights and our consciences, for the sole purpose of sitting and thinking about what we had done.

What if you get one chance, but only one chance, to get it wrong, to make THAT mistake, he asked, and this was that chance, that mistake?

And later, after the doctor had said that it seemed that she hadn’t hit her head, at least not hard, and that she seemed fine, that we just needed to watch her, keep an eye on her (those eyes that so fatefully strayed): did we dodge a terrible, terrible bullet? Did we get lucky? Did we get away with something? THIS TIME?

We’ve been beating ourselves up ever since.

We know – I know – that we can’t protect her from every bump and tumble. That even the best parents look away at the wrong moment, sometimes. Loosen their grip, trust that the safety belts will hold, trust that the safety belts are just in case and that it’s no big deal if they’re missing or broken and that even though you never leave child unattended it’s okay if you look away for just a second, just a second.

But, oh, holy Mary mother of God, that second, that second is all that it takes and once that second passes you can’t snatch it back. And then it doesn’t matter, whether you were bad, or good, or a little bit of both.

The blood, I could handle; I know that motherhood, parenthood, is a river of blood and spit and shit and tears. I know this; I expect this, however hard it gets. But that silence, today, when I looked away, when she fell, when the world stopped – the silence overwhelmed. I know that it was nothing (although we are still watching, we will not sleep, listening for her to stir, listening for her breathing, reassuring ourselves that she is fine); I know that we will go through this again; I know that – given WonderBaby’s daredevil nature – we will probably go through something like this many times over. I know that my heart will pound to the point of bursting again and again and again. And I know ( I pray) that it will all be fine, more than fine.

But how do we do it? How do we calm our hearts? Do our hearts ever calm? Or do the hearts of parents always beat harder, faster, always threaten to burst? 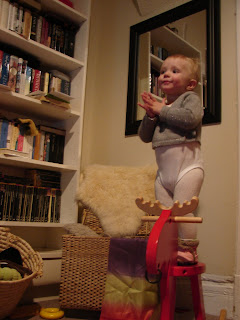 It’s no wonder we drink.

The Science Of Sleep