In four weeks, give or take some days, I will give birth. To a baby. Another one.

At this point in my first pregnancy, I was totally prepared for the arrival of the baby and for any and all potential natural disasters and had already moved on to alphabetizing the boxes of teas in the tea cupboard. I had purchased and assembled (okay, had husband assemble) a stroller (carefully selected after extensive research) and a crib (examined and re-examined and re-examined again for possible defects and potential baby-head-mangling gaps.) I had outfitted the crib in organic cotton linens and stocked the dresser with impossibly tiny onesies and receiving blankets and diapers and diaper ointment and baby jammies and wee socks and booties and even some of those creepy little fingerless cotton mittens that I never did use. I had stocked the bookshelves with baby books, and put pictures up on the walls, and put little stuffed toys on the daybed. If that baby came early, I was ready. If that baby came late, I was ready. If a tornado hit and shut down the city and we were suddenly faced with an extreme diaper cream shortage? I was ready. If the ice caps melted and the streets flooded and we were suddenly forced to float south on a crib made bouyant by a thousand Pampers Swaddlers and some teething rings? I. WAS. READY.

This time? I am not ready. Not even close.

I have one new onesie for this child – one – and that was a gift. I haven’t even gone through Wonderbaby’s baby things – the stuff that I didn’t give away in the weeks and months during which I was convinced that I would never go through that new child thing again, HELL NO – to see if there is, by chance, one or two onesies or pajama sets that are not a) pink, or b) irretrievably shit-stained. The bassinet is in storage, as is the infant car seat. The BabyBjorn was given away, loooong ago, after Wonderbaby rejected it. And the nursery? Looks like this: 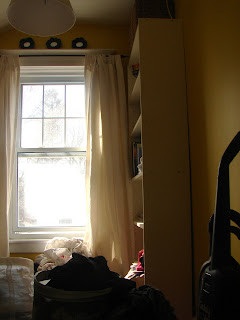 Those are bins of laundry – washed, yes, but unfolded, because who has time for that? – in the foreground. And a vacuum cleaner. And while there are books and magazines on the bookshelf, they’re all old New Yorker magazines, Penguin Classics paperbacks and Martin Amis novels. Not a single work of Margaret Wise Brown to be found.

But still I worry. Isn’t there a fine line between acknowledging what doesn’t matter, and not caring? Mightn’t I be perched on the slippery slope of devoting less care and attention to this child? This second child?

When I first found out that I was pregnant this time around, I was gripped – along with the joy – with fear and anxiety and ambivalence. I worried that while I was providing Wonderbaby with a wonderful, wonderful gift in a new sibling, I might also be depriving her of me – my love, my devotion, my attention, all of these things, undivided. I don’t worry about that anymore. She has been and will always will be given enough love and attention and adoration to last lifetimes. Now, instead, I worry that I am bringing her brother into a life where everything that he is offered – love, attention, adoration, onesies – is divided. Handed down. Seconds. Even if what he is being handed down – even if what is divided – is in quantities that can only be measured by infinities, doesn’t it matter that these are still seconds? That whatever he has – kisses, hugs, baby socks – will have been had by his sister, literally or figuratively, first?

That my love for him – although perhaps more the sweeter for coming from a calmer, more mature place – will not be my first, most intense love?

But it will always be the love that came second.