I was never one of those little girls who played with dolls and dreamed of becoming a mommy. When I played with dolls, it was to concoct new adventures for Barbie, International Super Spy, or to host global summits on world peace with George, my stuffed monkey, the Bionic Woman, a clutch of plush kittens and puppies and Raggedy Ann and Andy (Barbie was never invited, of course, because she was actively working to subvert the stability of the international political system through her mercenary intrigues.) Playing ‘mommy’ never occurred to me, because I never planned on becoming a mommy. Why become a mommy when there were so many much more fun things to do? Travel! Spy! Rule a small country!

My soft aversion to motherhood continued through my twenties and into my early thirties, for more or less the same reasons. I had more interesting things to do than become a mother. I had more fun things to do. Children would just slow me down. Children would be a drag. But then I spent a week with my nephew, Zachary – we flew him across the country to have a holiday with us, as a special treat – and we had such a fantastic time, such an unqualified blast, that I was forced to change my perspective. Kids, Zachary taught me, could be great fun. I decided, then, that I could see myself – that I could see us, my husband and me – with children.

So we had kids. If you’ve read this blog for any length of time, you’ll know that I’ve found motherhood very challenging at times, so the punchline that you might expect to come after ‘so we had kids‘ is probably ‘… and everything changed‘ or ‘… and I learned that motherhood is not just fun and games‘ or ‘… and I realized how much I missed my f***ing Barbies.‘ Or some such. But here’s the thing: as difficult as parenting can be at time – at most times, even – it’s still a hell of a lot of fun. So much so, that I’d argue that I am a much more fun person – and that I have much more fun – since becoming a parent than I ever did before.

1.) I have a far greater appreciation for a glass of wine (or a martini, or margarita, or whatever tipple is on offer.) Before you have children, you can go out for drinks whenever you like. You can stay in for drinks. You can stay up late drinking drinks and then sleep in the next day, if it’s a weekend. But once you become a parent, your entertainment schedule is dictated by the needs of your small people, and it usually gets reduced to evenings in watching Thomas the Tank Engine. Which sounds like drudgery, but you know what? It increases your appreciation for those occasions when you do go out, and – this is no small thing – it introduces you to the unique pleasure that is sipping Cabernet and snarking on Dora. After the kids have gone to bed, of course. Because, yes, you do still have Nickelodeon on at that point. Which leads me to…

2) You watch kids’ shows, and you like it. I’m totally not joking. Sure, some kids’ shows are unwatchable (Barney, Caillou), but some of them are kind of fun, or at least fascinating, in a late modern cultural studies kind of way (there could be whole graduate seminars on the critique of late capitalism that is immanent in any given episode of the Teletubbies.) And if you keep your DVD shelf, or your iTunes library, stocked with old episodes of Sesame Street or the Muppets or Fraggle Rock, you will have hours of awesome viewing.

3) You go to animated movies and enjoy them unironically. Come on. Like you’d have seen Toy Story 3 in the theater and giggled and clapped and wept unabashedly if you didn’t have kids.

4) You dance. I know that you do. I have two small children and I have done more dancing – in the living room, in the backyard, in the kitchen, in the bathtub (yes), in pretty much every possible domestic location, to pretty much every kind of music imaginable – in the last five and half years than I did in the first 34 years of my life.

5) You sing. Just substitute the word ‘singing’ for the word ‘dancing’ in the paragraph above, and you get the picture.

6) You make friends. When you’re pregnant, you make eye contact with other pregnant women and, if you’re brave, you make conversation (“don’t you hate swollen feet! I so hate swollen feet!”) just because, oh, god, there is someone who knows what you’re going through! YOU MUST TALK TO HER! Once the baby comes, you become even braver. You join moms groups. You initiate playdates. You make small talk with the other parents on the subway or on the airplane or in the waiting room. You are out there. And sure, maybe not all of these people are your social soul mates, but then, neither were all those random people that you went clubbing with in the 90’s, either. And at least now, you’re sober.

7) … mostly sober, anyway.  See #1, above. The bonus here is, that because, as a parent, you’re never over-indulging (at least when the kids are in your care; what you do on that couples-only Mexican vacation while the kids are with the grandparents is your own business), you’re not getting hangovers. Because, really, you can’t have hangovers when you have kids, because they will wake you at 6am and make you watch Barney and you can’t survive that on a hangover. So you don’t over-indulge, and you don’t get hangovers, and you do appreciate the brilliance of a single, perfect glass of Cabernet, and it is enough, and it is awesome.

8.) You seek and find opportunities for play. You keep a keener eye out for parks and playgrounds, obviously, but you also notice which trees are good for climbing, whether a given hedge makes for a good hiding spot, whether egg cartons or empty toilet paper rolls or empty water bottles or scraps of paper would make for good crafts, whether a particular configuration of furniture would make for a good blanket fort, whether pancakes can be made into fun shapes, whether a given puddle is good for splashing (trick statement! ALL puddles are good for splashing!) You view the world through the eyes of a creature who seeks constantly to play. You view the world through the eyes of your child. 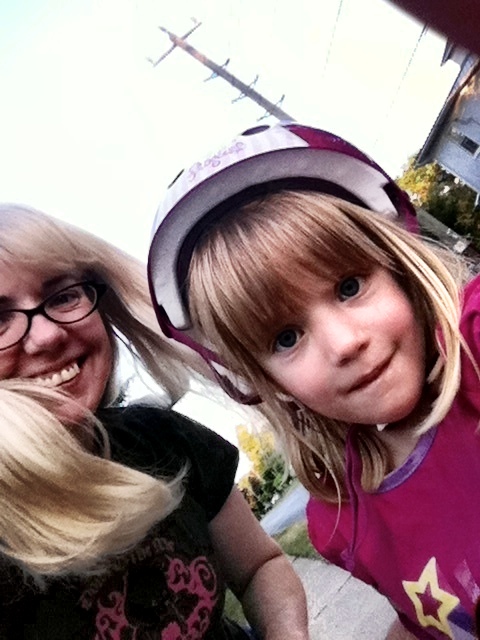 9) And if you’re uninhibited enough, you indulge in those opportunities for play. And come on: if anything can loosen one’s inhibitions, it’s the presence of children. Especially the presence of one’s own children. Show me a grown-up who became more inhibited after having children, and I will show you a parent who is doing it wrong.

10) And when you’re done indulging your loose inhibitions, you have an excellent excuse for having that lovely glass of wine. “That was exhausting!” you declare to your spouse / neighbors / random people at the playground, as you clamber out of the sandbox / off the slide / away from the craft corner / off the roller coaster / out of that Snow White costume. “I’ve earned this glass of Chardonnay!” You don’t need to tell them that you’ve been having the time of your life. If they’re parents, they probably already know.

I haven’t even touched on the joys of cavorting in sprinklers, playing at water parks, visiting Disneyland and enjoying it unironically, roasting marshmallows over campfires, playing Barbies, going trick or treating at Halloween, leaving out cookies and milk for Santa at Christmas, hiding Easter eggs at Easter, throwing birthday parties with lots and lots of balloons and really sugary cake. Sure, you could do all these things before you have kids, but you probably won’t, because you’re too busy being a grown-up, and also, lone grown ups playing at water parks and riding the Mad Hatter’s Tea Cups and trick or treating are regarded with suspicion. It’s kids that give you reason and the excuse and the inspiration to do ridiculous and ridiculously fun things.

The party doesn’t stop when you have children, people. It just gets better. Sure, you’ll be exhausted, but isn’t that the effect of any great party? And like I said: NO HANGOVERS.

This post is sponsored by UP ALL NIGHT… Life is all about balance. So what happens when you throw a new baby into it? Find out; series premiere Wednesday September 14 on NBC.