The Way We Were

by Catherine
Uncategorized
Share
When I began blogging, I knew nothing about blogs or mommy bloggers. I didn’t know who Dooce was. I didn’t know what Dooce was. I had stumbled upon a mom blog accidentally, while searching for advice on gas and reflux and the like, and I immediately took it for a diary. A very funny and illuminating diary, but a diary nonetheless.

And I thought, I can do this. I want to do this.

I was under treatment for post-partum depression at the time. My psychiatrist had advised me to keep a diary, to vent and to sort through my thoughts and to keep track of them so that maybe I would maintain enough self-reflectivity about the depression to keep myself a step or two ahead of it (because if you actually write down the words ‘bought single airline ticket to Mexico today; am abandoning husband and baby’ you’re more likely to recognize that that’s the depression talking.) But I didn’t want to keep a diary. I’d kept diaries in the past, and they always turned into the worst kind of sappy, self-absorbed rambling (ahem).

But this, this blogging thing – this seemed different. I could keep a sort of diary and have a handful of people – my husband and friends and family and the like – as an audience, or as a sort of virtual Greek chorus, listening in and commenting upon the action of my mothering struggles as I strutted and fretted these upon the stage of the blog. It would be a way of recording my experience, of articulating my experience, and of drawing a few intimates in to my experience.

So I started the blog as a sort of semi-public diary. That I had an audience, however small, was key: I was writing for that audience – for my husband and for my mom and for the circle of friends that I’d informed about the blog. I was both self-conscious about my writing and remarkably unself-conscious: I’d ramble on about spit-up and swaddling and breastfeeding and swaddling and swaddling again and it was a way of both showing off my writing and performing my motherhood. It somehow made it all easier, more manageable, more fun to work through the struggles of motherhood as a kind of performance. Spit-up is just unpleasant if it’s just you alone, on the couch, wondering what the fack you did to deserve being sprayed with partially-digested breastmilk. But it’s funny if it becomes a story that someone else gets to hear or read. The same is true of snot-sucking and swaddle-busting and sleep-deprivation. And once these things become funny, they become manageable.

My early posts seem, at first glance, to be just so much long-winded rambling about swaddles and sore nipples and snot-suckage and weird toys – but they’re also performative rambles. They’re rambly because the stories felt rambly, because that’s how I would have told those stories to a friend. I would have been breathless and wide-eyed and I would have been cursing a blue streak. That hypothetical delivery made it all the more funny and – to my own mind – accessible. Because that’s how I would have performed those stories, in my living room or at the dining table.

Those early posts, in other words, were just as performative as the posts that came later, once I’d realized that I had a much wider audience, and that I was performing motherhood on a shared virtual stage. In a way, I think, they were actually more performative: there was probably more exaggeration of my frustrations and of my confusion, because I was trying to communicate my experience to an audience that I felt wouldn’t immediately (in the literal sense of without mediation) grasp my struggle. My husband, my family, friends without children – I wanted them to laugh and to admire my skill with the written word, but more than anything I wanted them to get that this shit was hard. That I was struggling. That I was a little bit crazy. That if I was laughing, it was through tears.

But as I began to discover that there was a larger community, out there, out here, beyond the stage and yet, somehow, still on the stage, my performances, my writing, changed. They became, I think, less self-conscious. I did not have to persuade my new audience, my fellow performers, of my experience. They – you – knew. You already knew what this whole mothering was like; I didn’t have to persuade you that it was hard, because you knew that. You know that. Our common experience as parents and as writers made it possible for me to settle down and think about those experiences. Once I was freed from the perceived necessity of dramatizing my true stories – necessary, I felt, if my close circle of non-mother intimates – was to understand what I was going through – I was able to get down to the business of simply telling those stories. And reflecting on those stories, and seeking out other stories, and reflecting on those stories, and so on and so forth.

A dear bloggy friend told me, recently, that she loved my old posts – the swaddle rants, the snot rambles – and that she had wondered whether my writing was looser then because I was less self-conscious, less inhibited by the idea of audience. Curiously, the answer is no. I may be more writerly now, but that writerliness has, I think, come hand-in-hand with the loosening of my inhibitions. It was only once I became freed from the perceived need to show that I became better able to tell. And it was you – my audience, my friends, my fellow players – and my awareness of you and my awareness of myself as one of you that freed me. 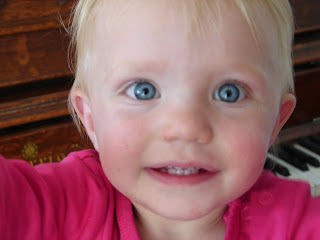 (big hug)
This is my contribution to our first! ever! BlogRhet meme – on the question of how your blogging has evolved. You can check out the details here (and track the links to check out other posts). And because it’s a meme, I need to do some tagging, and so… Redneck Mommy, Mothergoosemouse, PunditMom, Beck, Julie and Fidget? And you too, Liz. Because you need a distraction from all of that baby love. Have at it. And all the rest of you, too (MBTers? You catch that?). If you’re not too busy doing this.
*********
On the topic of bloggy love, Bon nominated this post for a Perfect Post award. All the nicer because I especially love that post, too, and am so heartened to know that it struck a chord.

Don’t forget about the BlogHer contest that MBT is holding. Just write a post on some variation on the topic of how blogging empowers women. That’s all. You could win a two-day BlogHer registration package. Or, if you don’t want or need the registration, you could also win candy. Candy’s good, too. Deets here or here. Do it. Don’t make me come find you and twist your arm.
Share
0
Share
0
Share
0
Share
0
Previous post
Blah-De-Blahg
Next post
A Clockwork Sippy Cup