Wonderbaby still refers to herself as ‘Baby,’ sometimes. She’s no longer a baby, of course, except in that corner of my heart in which she will always be my baby; she’s the very model of a running, jumping, leaping, talking, demand-issuing, arguing little girl (toddler version, turbo model). But she still likes to call herself ‘Baby.’ Not as a proper name, as such – she knows her own proper name and her nickname and refers to herself by these names frequently – her reference to herself as a baby runs more along the lines of descriptive noun: Mommy and Daddy have a baby, Wonderbaby is Mommy’s baby, etc, etc. She knows, too, that ‘Mommy’ and ‘Daddy’ are not our proper names (we do not, after all, refer to each other this way. Too kinky.) Hence statements, from Wonderbaby, like: Mommy’s name is Caffrin (her unique pronunciation of my given name), Daddy’s name is Kayo (ditto), Baby’s name is… and so on and so forth.

In recent weeks, things had begun to get a little confusing, because we had begun discussing The Other Baby. The baby, as Wonderbaby tells it, that lives in Mommy’s button (navel). The baby that she refers to as babybruddasista (she cannot, it seems, decide whether or not she would like a brother or sister, so Baby has been declared both. As it happens, there are no prenatal tests available for hermaphrodism, so who knows.) Her baby. Her much-anticipated babybruddasista, with whom, she tells us, she is going to share her toys, including Toadstool (formerly The Phallic Lovey), which is huge. Her baby – the baby that is not her – is the baby, and so we had begun distinguishing between Our Big Girl and The New Baby. (Do you know something about a baby? HBF asked her the other week. My babybruddasista in Mommy’s button! she shouted in reply. She shouts, a lot.)

But then we stopped talking about Baby, our other Baby, babybruddasista, aka Sprout. We stopped talking – or rather, I stopped talking – because it all of a sudden seemed imprudent, an ill-advised invitation to the gods to mess with us further, to speak of the pregnancy in anything other than hushed, serious tones. We – I – no longer said ‘baby’ and ‘birth’ or ‘Sprout,’ choosing instead words like The Pregnancy, in full caps, as if that were the end and the beginning of it all, as if Sprout existed only within the context of this pregnancy, with its attendant anxieties.

I hadn’t really been aware of this, this new refusal to openly discuss and name, until Wonderbaby and I met an infant at a bookstore the other day. My have baby, Wonderbaby announced, upon seeing the tiny new person. My have baby in Mommy button. And then, a few moments later, she turned to me: Mommy baby button? My babybruddasista? As if there were some new doubt. As if the sudden halt to any and all happy discussion of The New Baby/babybruddasista signaled some hidden doubt. Which, of course, it did. I just hadn’t figured that she would notice.

I can’t go through this pregnancy with a dark cloud of what if hanging over my head, if only because I can’t let that dark cloud bring even the slightest bit of darkness to Wonderbaby’s sunny days. It sucks that I still view the set of possibilities that have been placed before us as a dark cloud, despite my insistence that this will all be fine, nomatterwhat, but there it is. Those possibilities, in their form as possibilities, are a source of worry, of anxiety. I would hope that if those possibilities become certainties, the force of anxiety that attends them will diminish and all of the energy of our hearts will direct themselves to simply addressing and embracing what is, but for the moment all of that energy – for me, anyway – is directed toward the fuzzy spectre of what might be, and the fuzzy, spectral character of what might be has me in a constant state of anxiety.

So I think that I need to take the test that will turn uncertainties into certainties and – hopefully – chase the spectres away. I think. In any case, I’ve booked the appointment for the test, which, if I don’t chicken out, will take place this Thursday. I’m still terrified – terrified to the very marrow of my bones – of miscarriage, and that fear may well overpower my need to battle uncertainty in the next few days. We’ll see. At the least, I need to take steps toward diminishing that uncertainty, and I need to see if my courage holds. It might not hold, and if it does not, fine. I will other ways to battle the uncertainty. But for the moment, I need to get a step or two closer to some sort of knowing, so that I can get out from under the fear of uncertainty, a fear that is hovering over me, a dark cloud that casts its shadow upon everyone around me. Including Wonderbaby.

And if I chicken out -which remains a very real possibility – it will only be after having walked into a least one dark corner and felt around. If that’s too much, so be it. But at least I’ll have gone there, and will understand better the character of my fear. I’ll know that much, at least, by Thursday morning (more hand-holding – even though you’ve all already been too generous with your virtual hands – may be demanded before then. Be on alert.)

God, I’m depressing. Sorry. Accept this happy moment, courtesy of me, and Wonderbaby: 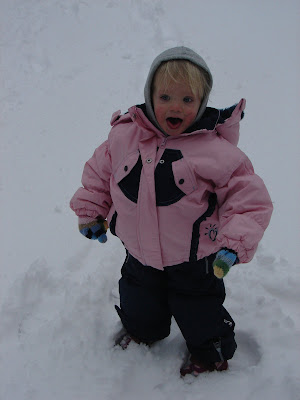